This Christmas post was adapted with permission from The Roadmap of British Ghosts by Ruth Roper Wylde, which is due to be published early in 2019. Thank you, Ruth. Featured here are a tale from the parish of Great Horwood, and several tales from the parish of Tingewick. I took all the photos, yesterday. In the rain. You can tell. 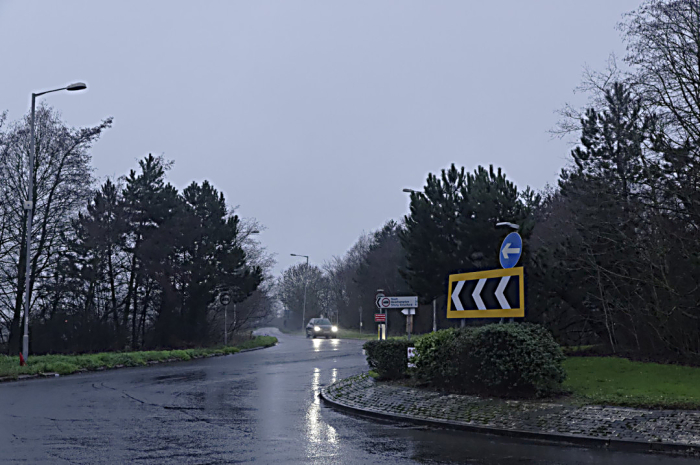 This car is just coming to the give way line from Nash. The line of the road has been altered, and I was standing about where the road from Great Horwood used to be. The horsewoman was coming from Buckingham, to the left of the picture.

When Ruth asked on social media about the various ghosts around Buckinghamshire, one witness wrote to tell her about his experience:

In 1997 he was driving towards the crossroads between Nash and Great Horwood on the Buckingham to Bletchley road, the A421. (Today there is a roundabout there) He was driving from Nash and had a passenger. It was a bright sunny day.

He pulled the car up at the give way line. A heavy lorry belonging to the Leighton Buzzard firm Pentus Brown and Sons approached the junction.

He and his passenger were quietly chatting when their attention was caught by a lady on a horse trotting down the road from the direction of Buckingham. She wore Victorian style clothing and sat side-saddle. A small dog trotted alongside. They only had a moment to wonder at her attire and riding position, then to their horror, instead of stopping at the crossroads she simply carried on, completely oblivious to the lorry.