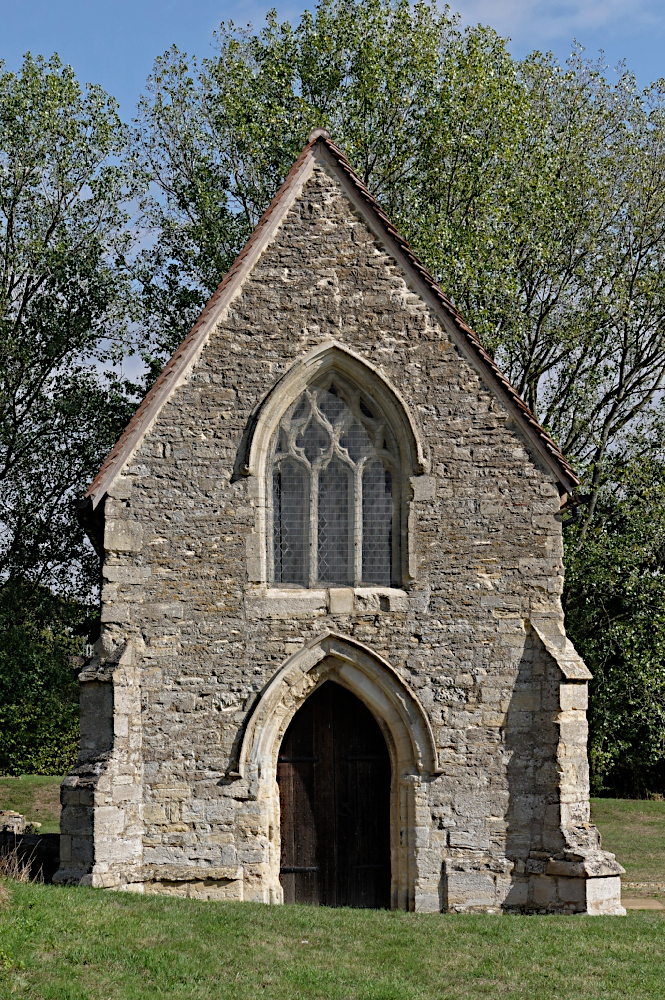 The West end of the chapel. Nothing quite lines up, though the overall effect is good, with nice proportions. The buttresses do not match each other, so may have come from two different buildings.
The three light reticulated window is well carved and still in good condition.

This is part 2 of 3 of a short series on the Grade 1 listed St Mary’s chapel, at Bradwell Abbey, Milton Keynes. In part 1 Our Lady of Bradwell we looked at the detailed timeline and saw how the chapel survived when the other priory buildings didn’t.

Next week we shall take a good look at the paintings that gave the chapel its Grade 1 listing, but today we shall see how the 14th Century chapel was designed, constructed and changed.

Once again, many thanks to Peter Martin of the Milton Keynes City Discovery Centre for getting me access.

The chapel was built to enclose a statue of the Virgin Mary, that had been set in a niche on the end of the priory church. Pilgrims would then pay to enter and pray to St. Mary.

The strong cult of St. Mary in England meant the chapel would be a popular pilgrim destination. It would bring much needed revenue to the priory, which had been in decline for over twenty years.

I think that means that the chapel was built on a budget, out of whatever materials were to hand. That meant reusing materials from other parts of the priory, probably from ruined buildings, and that the monks themselves built the chapel.

Our Lady of Bradwell 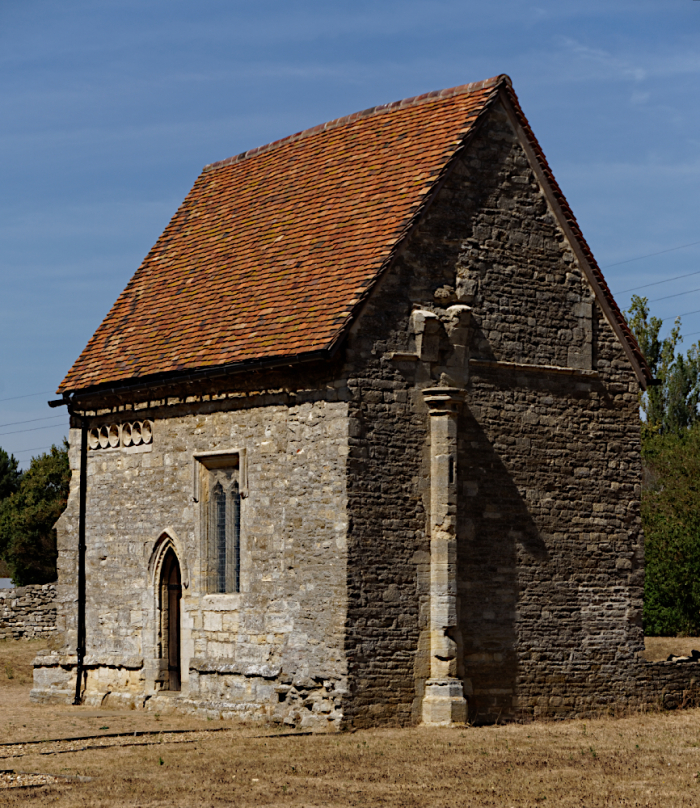 The East wall of the chapel is all that remains of the main body of the church. The respond or half column on this wall with the base of an arch above it shows the end of an arcade between the nave and aisle; this would have been on the inside of the church.

The Pilgrim's Chapel
Part One
Over six hundred and fifty years ago the monks of Bradwell Priory built a small chapel against the West wall of their church. That church and the rest of the priory buildings are long gone, but the small chapel survives.

The chapel is kept locked, but I managed to get rare access to the interior with my camera and had a good long look; there’s lots to discover. Many thanks to Peter Martin of the Milton Keynes City Discovery Centre for giving me access.

This week I’m going to tell you the story of the chapel, in part 1 of 3.

Next week we shall be looking at the way the chapel was designed and built, and on the week after in part 3, the unique wall paintings that gave it a Grade I listing.

Continue reading "Our Lady of Bradwell" » 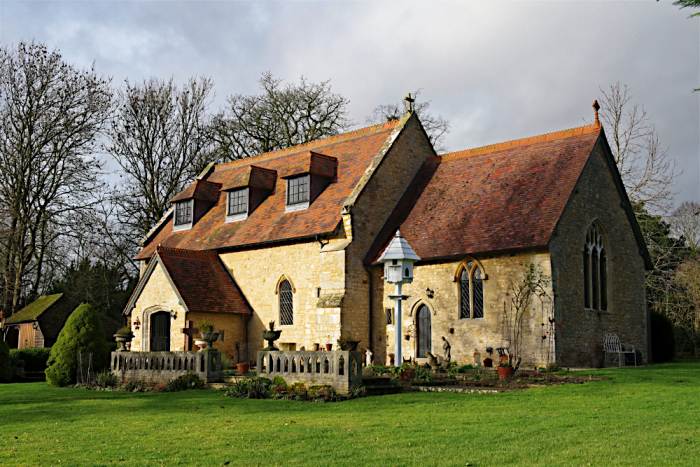 St Leonard’s church became a house in the late 1970s, gaining an inserted floor above the nave and dormer windows in the roof. The chancel is now a living room.

This is the hamlet of Foscote, near Maids Moreton. You might find it spelt Foscott, or Foxcote. You might have guessed it means fox cottage/hut/shelter/den.

Old photographs show the graveyard in good order in 1945, albeit with the West wall covered in ivy. But by 1973 it was overgrown. The captions to photos taken in 1976 describe the church as derelict.

You can see these and other photos including interior shots at the link above, which takes you to Buckinghamshire County Council’s online collection of historic photos. Pick Foscott from the drop-down list.

Simple
This simple church was built in the 12th Century with just a nave and chancel. The chancel was extended in the 14th Century; the present chancel arch is from the same period, probably built at the same time. It’s a small narrow arch, most likely because the original arch was small and narrow too.

The porch is Tudor which makes it 15th Century; the outer doorway has that typical arch shape seen so often with Tudor work. The inner doorway is transitional; that is, built when styles were changing from the Norman to the Early English.

Imposts are the blocks at the base of an arch. Stoups held holy water, and on entering or leaving the church a worshipper would dip the fingers of their right hand and make the sign of the cross.

Lancets
As usual there’s a variety of window styles, many inserted after the original construction. There are several wide lancets which may well be the same age as the church; from the road and without going inside I cannot say for sure.

Of course, it’s a private house now so I doubt I ever will see the inside for myself. Oh well.

You may be concerned that this is not a functioning church any more, but there’s over 200 towns, villages and hamlets in North Bucks and most of them have a church; so I shouldn’t worry; at least it’s being looked after.

The church can be seen from the B440 when you approach the village from the North.

Edlesborough church was originally built by the Normans, but like many churches has been much enlarged and altered since then. The nave and aisles were lengthened by two bays in the mid 13th century, but shortened by one bay 90 years later.

St Mary the Virgin’s, Edlesborough sits on a steep knoll above the village; it’s a short but steep climb through the graveyard to the entrance in the south porch.

St Mary’s is redundant, the parish now merged with Eaton Bray. the church is now looked after by the Churches Conservation Trust, and is open every day except when booked for champing. 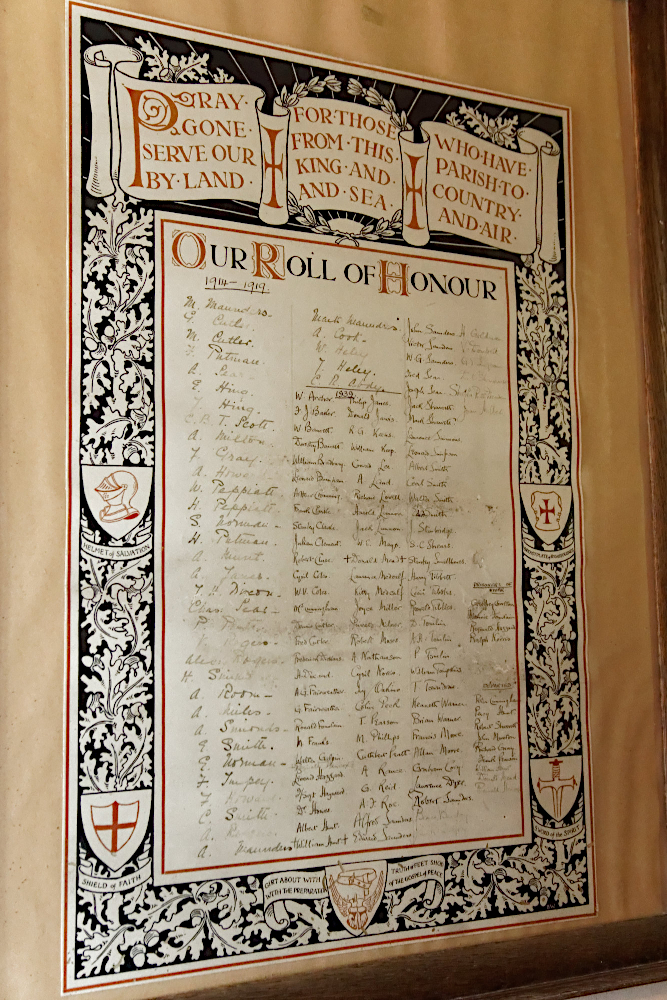 This is a roll of honour, in Edlesborough’s church of St Mary the Virgin. It’s on a printed template, sold (I presume) to churches during the first World War.

Sometimes you can still find them, usually at the rear of the nave.

There are names from both World Wars here. The names from WW1 are of those who fought and survived, not those who perished; their names, along with those who died in WW2, are on the war memorial at the edge of the churchyard.

In contrast, far more names are listed for WW2, but the names of the relatively few who died are listed again. You can just see them, bottom right under “Departed”.

Four men who were prisoners of war are not in the main list, but are listed just above those who died.

There are very similar templates in at least two other churches in North Bucks. There’s one at Chearsley’s church of St Nicholas, and two at St Firmin’s church, N.Crawley. I’ve also seen other templates used.

Note:
I have to admit I got caught out today! As today is Boxing Day, It didn’t occur to me until late afternoon that it was also a Monday, and I should have put up a Monday Photo much earlier! Just the way my mind works, I suppose. Sorry folks! 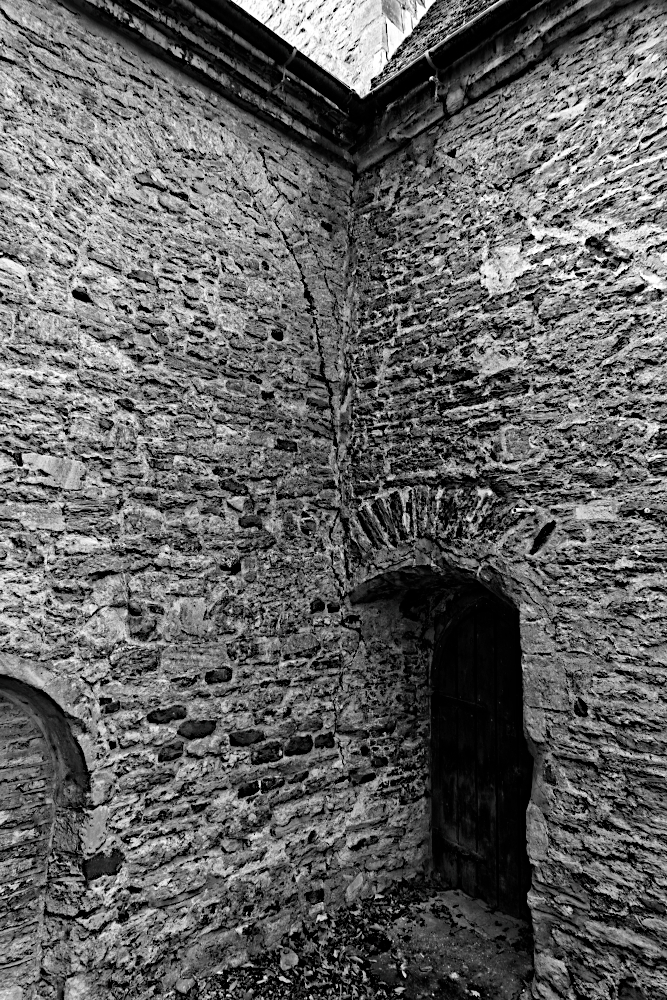 On the left is the North wall of the chancel. The crack following the edge of the blocked up window is quite clear; it runs right down to the ground in the corner.

My post last week on Simpson church had a look at the severe structural problems in the chancel, included a poster advertising an auction to raise money for repairs.

I’m pleased to tell you that the auction raised £602.50 towards the repair fund.