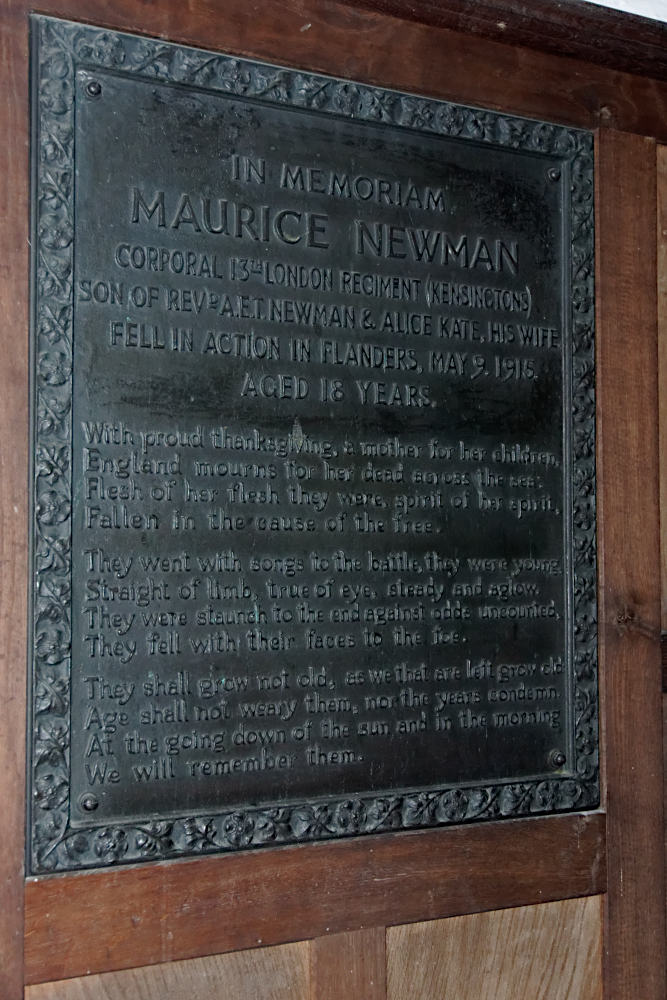 Arthur Maurice Tweed Newman was killed in action in the second year of the First World War. He was just 18. This is his memorial plaque, in St. John the Baptist Church, Granborough.

Called Maurice Newman on the plaque, (his father was also named Arthur) at 18 he couldn’t have been in action for very long before he fell.

Maurice’s mother had passed away in 1907, and his father the Revd. A. E. T. Newman was described as being “dismayed” at their deaths. I’m not surprised. It must have been even more distressing to the Revd. Newman when his son Charles became old enough to fight in 1916, though in the end Charles survived the war and would live until 1985.

Maurice had six siblings, all but one younger than him. At his death, Charlotte would have been 20, Charles 17, Alice 14, Hugh 12, John 10, and Maurice’s half brother (His father had remarried in 1908) just 6. How do you explain to children that their big brother is never coming home?

In 1918, another child was born to the Revd. Newman and his second wife Florence. They called him Arthur Maurice Newman.

The plaque has three of the seven stanzas from the 1914 poem For the Fallen, by Laurence Binyon. Most of us know the fourth Stanza of the poem, which is also the last one on the plaque:

They shall grow not old, as we that are left grow old:
Age shall not weary them, nor the years condemn.
At the going down of the sun and in the morning
We will remember them.