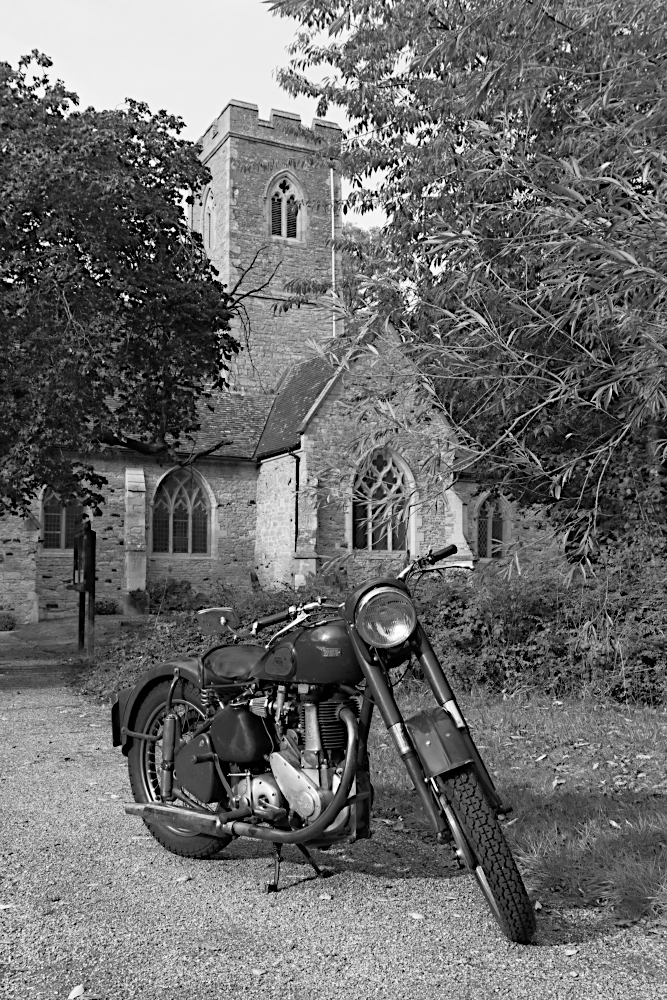 1953 connects this classic motorcycle, the church behind it, and our late Queen.

You probably know that her late Majesty’s coronation was on 2nd June 1953, and just before Christmas that year this 500cc BSA was despatched from the factory to a dealer in Edinburgh.

I expect the bike was put together early in December, built from parts made by the factory in the first few months of Queen Elizabeth II’s reign. I now own this machine, and there’s a huge difference between this bike and the motorcycles you can buy now, in performance and technology.

I often get people looking nostalgically at my obviously ancient bike, but in 1953 it was state of the art. It was easy to maintain, cheap to run basic transport; just what was needed in Britain, still coming out of wartime austerity.

Considered slow now, (I never cruise at more than 55mph) when first on the road it was faster than many cars. This model, an M33, was built to take a sidecar, an unusual sight now but very common in the years after World War 2. BSA even made their own sidecars, and in 1953 there was a choice of a family sidecar or a single seat de luxe tourer.

Behind the bike is the church of St Thomas the Apostle, in Simpson, Milton Keynes. Unusually, the central 13th Century tower is the oldest part of the church.

In the nave and above the tower arch is painted the royal arms of George II. This mural was carefully restored in coronation year, and on it GR2 for George Rex II was changed to ER2, of course for Elizabeth Regina II. There’d be uproar if this was done today!

And here we are in another coronation year. The death of Queen Elizabeth II was a shock, but not, I suppose, a surprise.

Hi Roger,
it seems your pride and joy came with no pillion seat - were such seats regarded as add-on options in that era, becaming standard later? Does BSA still survive?
Incidentally, looks like a typo in the coronation date shown.

The BSA name has recently been revived with a new 650cc single; it's had good reviews in the press. Thanks for catching the typo; I've edited the post.