A Bell, a Bell 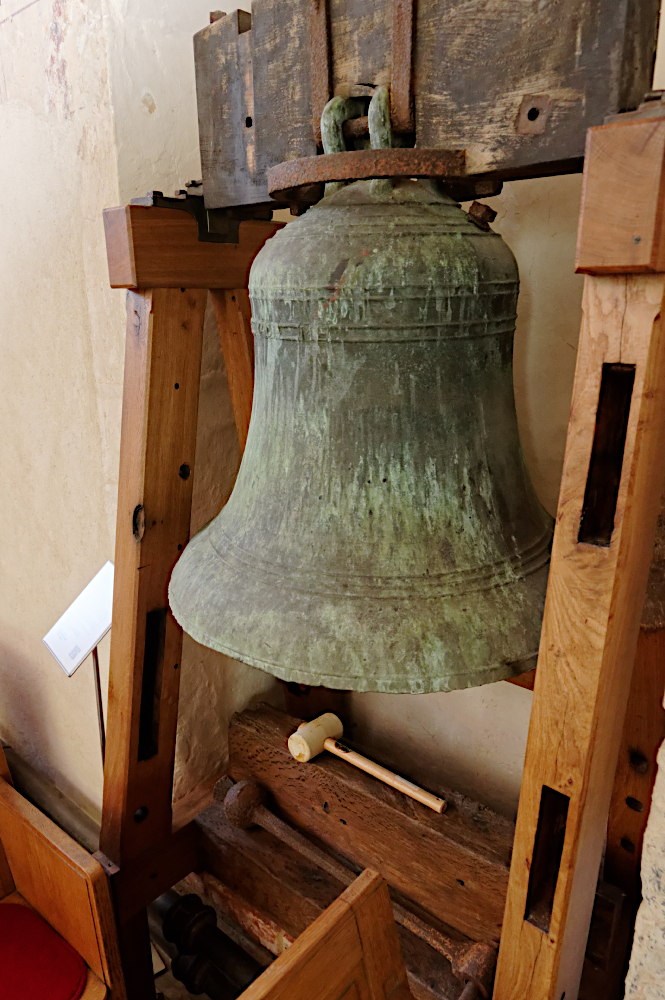 The old treble bell was cast just four miles away at Drayton Parslow in 1672. It still hangs from its late 19th Century elm headstock, made then by Whites of Appleton who also rehung all the bells this year. The wooden mallet below is there so visitors can give the bell a gentle blow; it takes quite a while for the ring to die away. It seems hard to believe, but this 29” diameter bells weighs 550 lbs.

Almost exactly in the middle of the North Bucks Wanderer’s patch is Little Horwood, and of course this is the village church.

St Nicholas’s is next to the Shoulder of Mutton pub and they share a boundary wall, so if looking round churches makes you thirsty, you won’t have too far to go for a drink.

The first thing I found when I went into the church was the old treble bell, now stood down and replaced by a new bell as it could not be retuned. 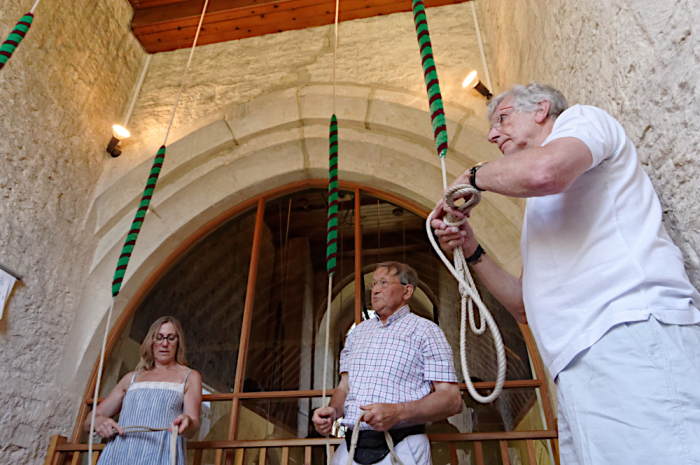 Before the raised platform was installed in 1999, this small church had one of the longest bell pulls in the country.

Unringable
Bells do need maintenance and repair. The tenor bell is a recasting done when the church was restored by the Victorians in 1889. The old bell had cracked and a large piece was missing. At the foundry the missing metal was made up by adding the metal of the church’s small sanctus bell; also cracked.

The bells had gone silent in 2016, made unringable by the state of the ancient bell frame timbers.

But in January last year the bells and frame were removed, and it wasn't until this year that they were rehung in a new cast iron bell frame, by the bellhanging firm Whites of Appleton. The firm also rehung Hanslope’s bells in 2020 and have worked on other bells in North Bucks. Another new bell in the tower makes a peal of six.

The bell stands in the alcove formed by the blocked up North doorway. On the wall above are five, maybe six wall paintings, and at least four of them are Medieval. 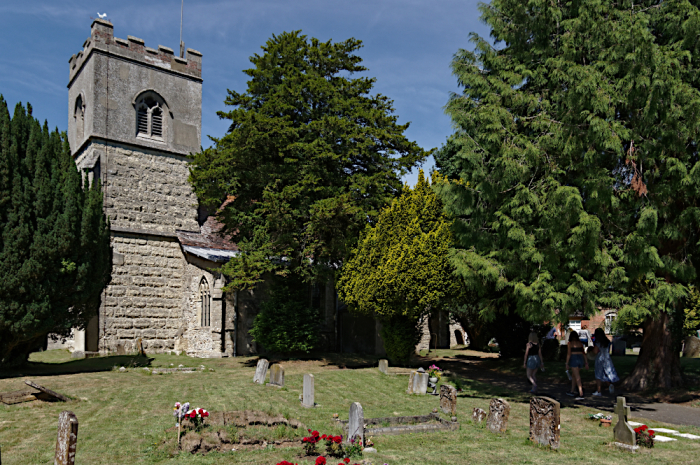 Villagers walk to the village fete. The tower is 15th Century.

Limewash
The paintings were found during the Victorian restoration under the usual layers of limewash, and received further restoration in 1995. At the same time the brickwork filling the doorway alcove was removed; they’d been laid there during the 1889 works.

I’d just taken my photo of the old tenor bell when the bellringers came in, and I was allowed to stand with them on the ringing platform as they started off the village show, with a peal of their newly hung set of bells.

Going back to my tour round the church, I looked at the general arrangement of arches, walls, and windows, trying to work out the construction order, then reading the church guide to see if I had got it right.

Early English
The church, I found out, is Early English. First built in 1200 as a nave, chancel, and South aisle, the chancel was rebuilt in 1320, being made longer and wider than the original. Towards the end of that century the aisle was rebuilt and widened. Both the aisle and the nave were made longer by one bay, to the West.

Like many others in North Bucks, the tower is 15th Century and the porch is Victorian, added in 1828.

There’s a stained glass window with a picture of a WW2 tank, and a side chapel with two framed and hung paintings. St Nicholas is a small church, but a nice one. It’s open every day. 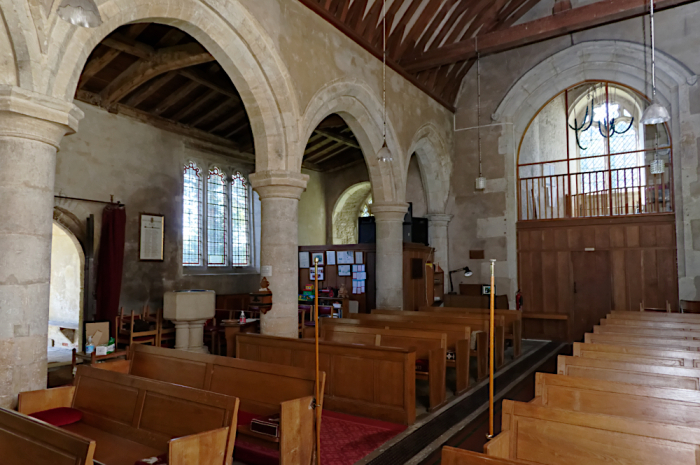 The nave and aisle, with the South door open and the tower arch with beneath it the wooden railings for the ringing platform. 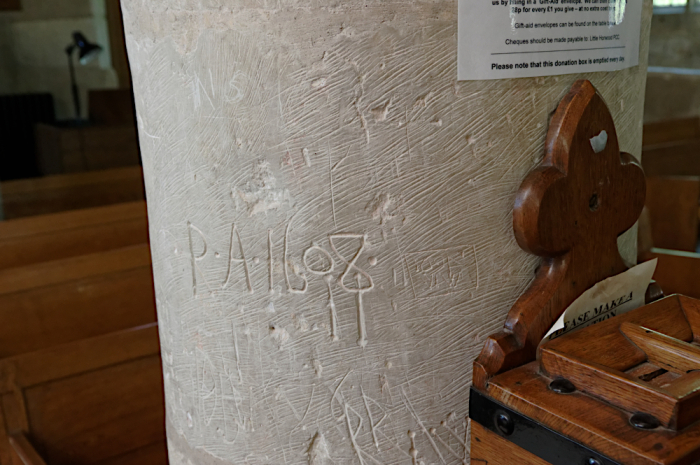 The columns in the arcade were built in the 1300s, but the graffiti on this one, the oldest found in the church, is from 1608. 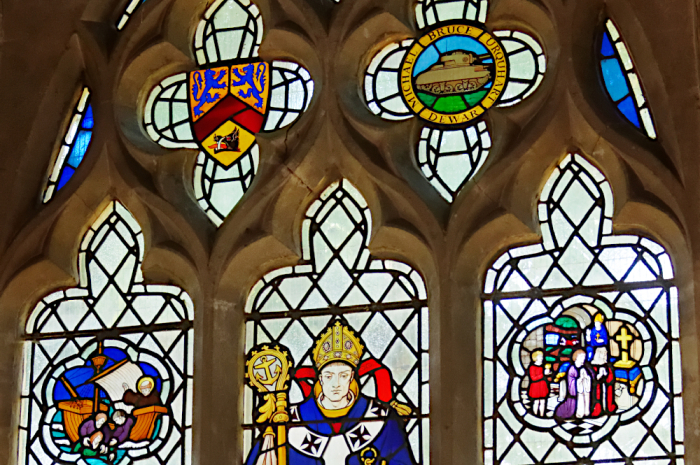 This 1955 stained glass East window was dedicated to the memory of Michael Bruce Urquhart Dewar, who in 1940 was appointed head of the British Tank Mission to the USA. The mission resulted in the M4 Sherman tank, used by Allied forces in great numbers in World War 2. there's a not very accurate picture of a Sherman tank top right, and bottom centre is St Nicholas. 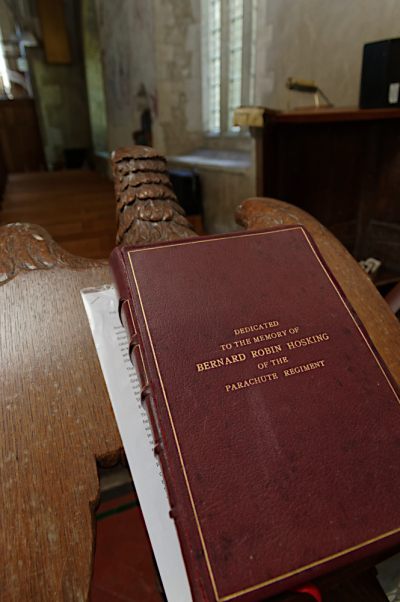 Bernard Robin Hosking (born 1947) was one of the Parachute Regiment soldiers selected by Chay Blyth, (also of the regiment) for his crew in the first Whitbread Round the World Yacht Race. But Private Hosking was lost overboard on 6th January 1974. On 5th January 1975 in a service of dedication, his parents presented this bible to the church. 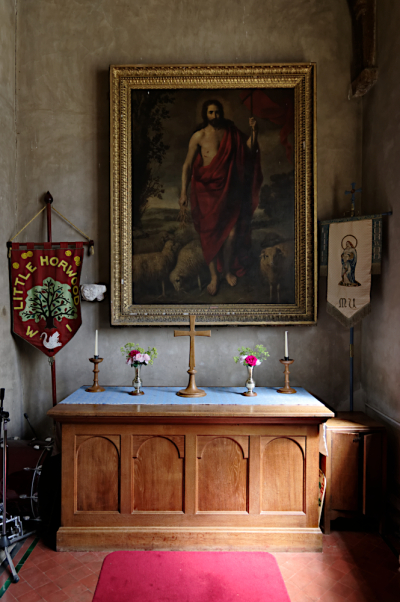 This side chapel is at the East end of the South aisle. The painting of Christ and the sheep is said to be by a Spanish artist named Pobar. I can’t find any records of such an artist, but there is a small village in North Eastern Spain called Pobar.

This post's photos were taken with a Pentax camera and lens.