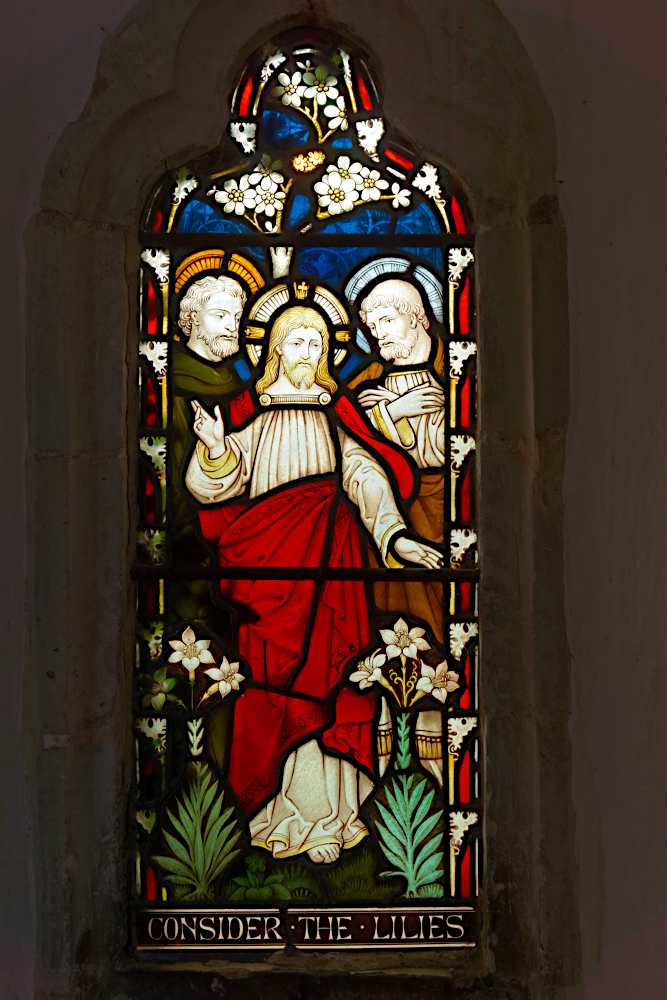 The firm of Clayton & Bell were making stained glass for church windows between at least 1450 and 1920, but nobody knows how old this Clayton & Bell one is. It does seem to be Victorian, and as there is no named benefactor I would guess that the glass was installed when the church was restored in 1880.
“Consider the Lilies” is from The Sermon on the Mount.

This small window is set quite low down in the chancel of Granborough’s 14th Century St John the Baptist church. It’s probably as old as the Decorated period church and is a lowside window.

Lowside windows, introduced in the 13th Century, are a bit of a mystery. They are always in the chancel, and nearly always found in the South wall at the end nearest the nave. They are always at low level; this example’s lower edge is below waist height.

Originally lowside windows had some sort of opening shutter in the bottom half. The most popular theory is that the shutter was opened during the service so that the small sanctus bell could be rung at certain points in the ceremony. There is little evidence to suggest this, but at least it’s a possibility.

Other theories like the one that think they are “leper windows” to let the afflicted hear the service without being in the church, are mere supposition.

I wonder if these windows were placed there for reading and writing before the days of artificial lighting, but now I need to look at quite a few of them to gather evidence for or against my theory.

Why don’t you have a look at this one and maybe some others and see what you think?

This post's photo was taken with a Sony A6000 camera and lens.