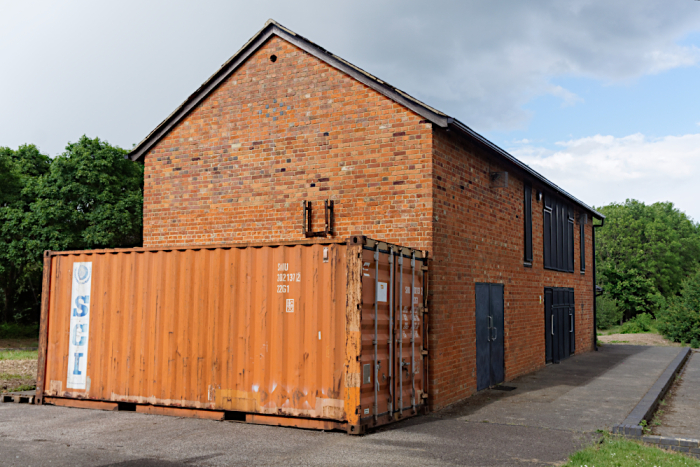 Until recently, I hadn’t visited this barn in decades. Back then in the mid 80s, the big doors were either wide open or missing and I don’t remember there being much else around it. Either way, this is where Milton Keynes’ Downs Barn estate got its name.

Down’s Barn wasn’t just a barn, but was several buildings ranged on three sides of a rectangle on the slope of a hill. This barn, the only building now remaining, marked the uphill edge of the rectangle.

The barns appear on an 1834 map, but the earliest record I could find of them being called Down’s Barn is on maps published around 1900. On the 1834 map there are also two similar clusters of buildings about half a mile away to the South.

These three clusters of farm buildings are all marked as “Barns” on the earlier map while farms are specifically named.

I think it’s quite likely that the farm buildings known as Down’s Barn were once a farmyard complete with farm house, but when the land was sold to another farmer they just became some more or less useful buildings away on a hill; I expect the other clusters could tell a similar tale.

Even maps from the 1950s show buildings on three sides of the farmhouse, but by the time I got there they were, as far as I remember, long gone.

The map from around 1900 seems to indicate that some of the buildings had open fronts; used to store equipment. Perhaps this made them less durable.

On the same map the nearest cluster is now called Manor Farm, a name it kept at least until the mid 1950s.

I did remember that Down’s Barn was high up on a steep hill and  the land sloped away to the Southeast to what’s now Campbell Park; the H5 (Portway) had not then been built. The land also slopes away to the Northwest and Northeast.

The farmyard, if that’s what it was, extended about a third of the way down what’s now an all weather playing surface; the barn is now a sports pavilion. The hedge behind the barn and another behind the camera were already there when Milton Keynes came along.

Why don’t you go and take a look? See if you can imagine what it once was like, when from this spot you could see the Grand Union Canal at the bottom of the hill, Moulsoe across the Ouzel Valley and to the North, Newport Pagnell.