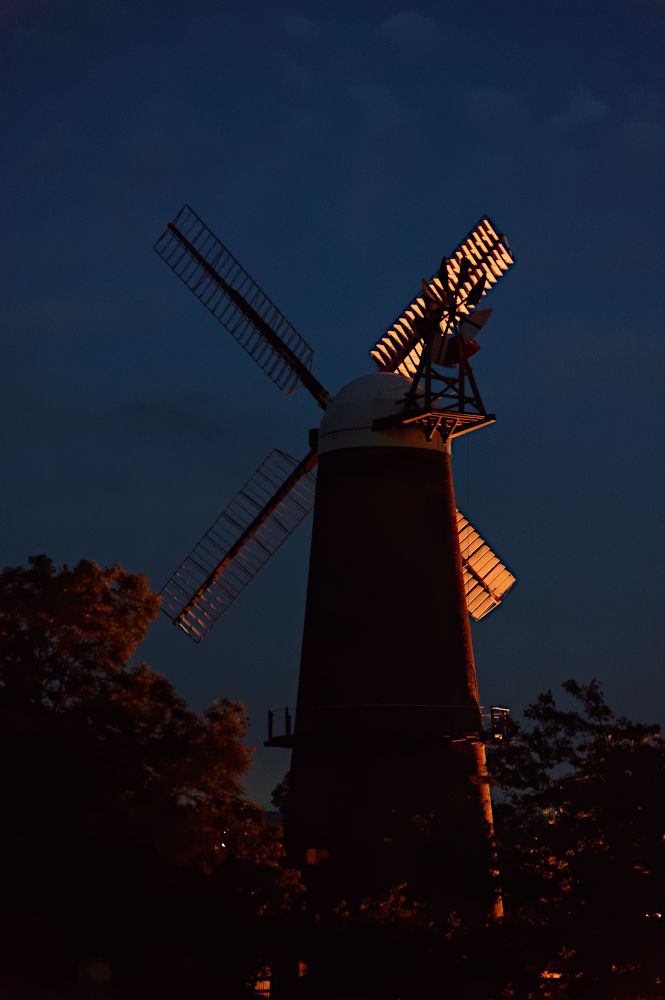 Here’s a less usual view of Quainton windmill I spotted recently on my way back down to the village from Mill Hill, after watching their Platinum Jubilee Beacon being lit.

That’s the local name for the steep hill above Quainton; on maps it’s Simber Hill, which I called it when I wrote about the village’s 19th Century windmill two years ago. I should have asked my auntie who still lives in the village; then I would have known.

By coincidence, even though today’s photo shows the mill from the rear side instead of the front, we can see the cap and sails from the same angle as in my previous photo.

That's because the cap rotates automatically to face the sails into the wind. But how does it work?

The fantail is on the opposite side of the cap to the sails. It turns in the wind if the sails are pointing the wrong way, and drives a system of gears which turn the cap.

When the sails are pointing the right way, the wind blows equally on both sides of the fantail, so it will not turn. When the wind changes direction, it blows on only one side of the fantail which starts to spin, turning the cap until the sails face into the wind again.

It takes many turns of the fantail to slowly rotate the twelve tons of cap and sails, driving it round with a relatively small cog that meshes with a huge geared ring.

Earlier windmills had to be turned manually, which meant they could be wrecked if the sails pointed the wrong way. That’s what happened in 1902 to Pitstone’s 17th Century windmill in a violent storm. The fantail mechanism had not been invented when it was first built, so the mill never had it.

Quainton’s fantail mechanism means it is not prone to the disaster that hit Pitstone’s mill; automation is a wonderful thing.

Quainton windmill is open on Sundays where you can often see it running. It's well worth visiting; see the link for details.