A Naval Man in Buckinghamshire 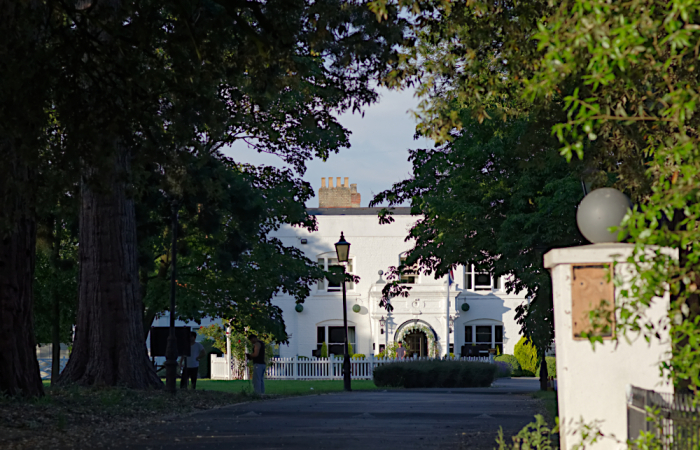 Many thanks to regular reader Taylor (Not John O'Hara as previously stated; sorry John Taylor) who sent me this detailed historical account and allowed me to publish it.

This is part one of three. Part two,

This is the story of Harold Blount, who rose high through the ranks of the Royal Navy but retired to the tiny village of Woughton on the Green, nearly as far from the sea as you can get in England.

Harold Blount was born on October 11th 1881 to George Bouverie Blount and his wife Annie Christina. They lived in the small town of Belvedere, Kent; now well inside Greater London.

By 1891 both Harold and his brother Oswald were pupils at the Grange Preparatory School in Eastbourne, which prepared boys for Public Schools and the Royal Navy.

In September 1898 Harold was commissioned as a Second Lieutenant in the Royal Marines Artillery, and in 1901 was stationed at Eastney Barracks, Southsea.

In 1912 he joined HMS New Zealand, a battlecruiser armed with eight twelve inch guns in four turrets. The ship was a gift to Britain from New Zealand. In 1913 the battlecruiser made a cruise to the Dominions, receiving a rousing welcome at New Zealand through April and May.

During WW1 the ship saw action at Heligoland, Dogger Bank and Jutland, and in the 1917 New Years Honours list Harold was awarded the DSO:

"Captain Harold Blount. Performed excellent service as officer of “Q” Turret on 31st May, as well as in the action off Heligoland in August, 1914, and at the Dogger Bank in January 1915."

“Q” turret was one of the four main turrets on the New Zealand. The 31st of May had been the first day of the two day Battle of Jutland.

In another decoration the Russian Government awarded him the Order of St. Stanislas 2nd Class (with swords) for distinguished service, again at the Battle of Jutland.

Captain Blount continued to serve on the New Zealand until 1919 when he was appointed as instructor in musketry for the Marines.

From 1931 until 1934 Harold Blount was Colonel Second Commandant at Chatham Dockyard in Kent, not 25 miles from Belvedere. He became Commandant Depot Royal Marines and held the post until 1937.

He, his brother Oswald, and their sister Minna had had a house at Tring but earlier in 1937 they moved to Woughton House in Woughton on the Green.

At his own request Harold retired in March 1939. He was 55. Six months later, Britain was at war with Germany. Though retired, General Harold Blount would not stand idle...

Many thanks to Charlotte Hall for her help with this series.