Not by Royal Appointment 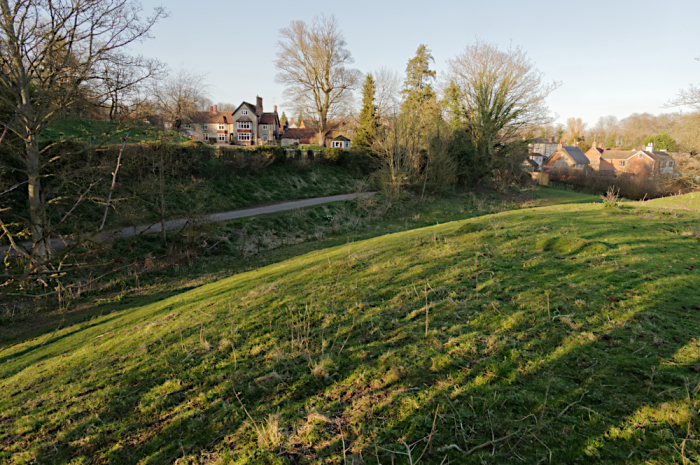 The bailey is visible from the motte, with the cut across the spur forming a moat between them. Castle lane runs along the moat side.

Bolobec Castle in Whitchurch was built for one civil war and destroyed in another, but in between it was a military strongpoint for 500 years.

In the 12th Century England was in the middle of a civil war known today as The Anarchy. Henry I had died on 1st December 1135, and had previously named his daughter Empress Matilda as heir.

But his nephew Stephen moved fast. He crossed the channel from Boulogne to England, then seized the crown on 22nd December. He had the support in England of some of the barons. 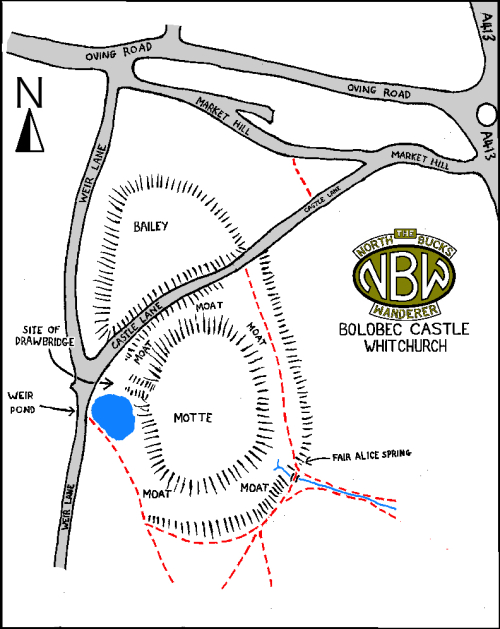 If there was once a weir here by Weir pond, it’s function would have been to raise the water level in the moat. I didn’t notice the pond on my visit and I think it’s a pond in name only, but the footpath to the South goes through a very muddy spot; water still flows through the moat. It’s possible to walk around the whole motte via road or path, but the bailey is a private garden.

Matilda would not renounce the crown and the civil war began, resulting in a breakdown of law and order. The war would last until 1153. After the war ended, Henry II succeeded Stephen.

Hugh de Bolobec was a supporter of Empress Matilda, and so in 1147 he built this castle, without the permission of the reigning monarch King Steven. 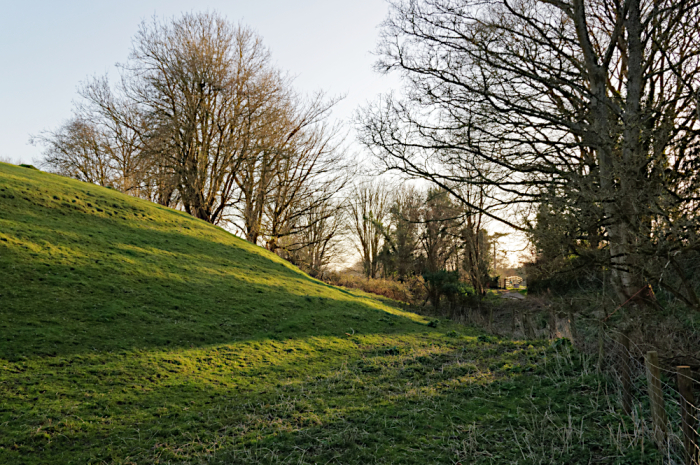 The motte sides would once have been much steeper, the moat deeper. The end of Castle lane is just visible, where it joins Weir lane by the drawbridge.

De Bolobec cut across a natural spur to form part of the moat. On the South side of the cut he built a motte on the natural end of the spur, and on the North side, the bailey.

It was an ideal spot; it overlooked the road between Aylesbury and Buckingham, the spur meant it wasn’t too much work to create defensive earthworks, and there was water on site from two sources.

The castle was most probably built with a timber palisade first, like the castle at Castlethorpe, then was later rebuilt in stone. The depression in the side of the motte where the gatehouse was is just visible to the right of centre. The remains of the gatehouse and drawbridge could be seen until the 18th Century. To the right (out of shot) is Weir pond, but it’s not much of a pond. Running away from us on the left is Castle lane, and in the foreground is the junction with Weir lane.

By the time of the English Civil war in the 17th Century, Bolobec castle had been abandoned. It was in ruins, but it was still defensible enough that King Charles could use it as a garrison. Towards the end of the war the Parliamentarians took the castle, and in 1651 it was slighted; blown up and made indefensible.

If you walk round Whitchurch you might be seeing some of the castle stonework, scavenged by the villagers for building works. 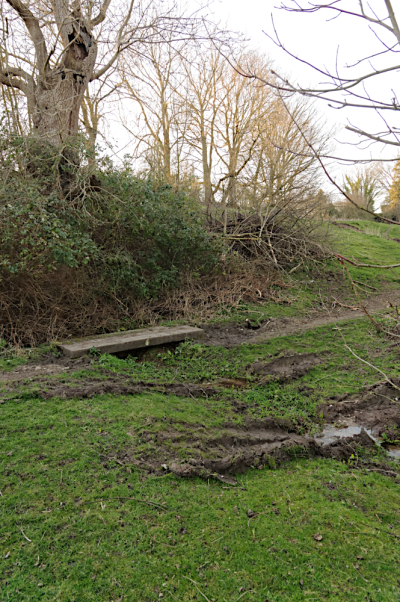 Fair Alice’s spring seems to be in a different position than shown on maps; inside, not outside the moat. I found two places a few feet apart where water came out of the ground to form a stream, and the path crosses on this plank bridge.
Within the moat would have been a more logical place to have a water source, rather than outside it as the maps often show.