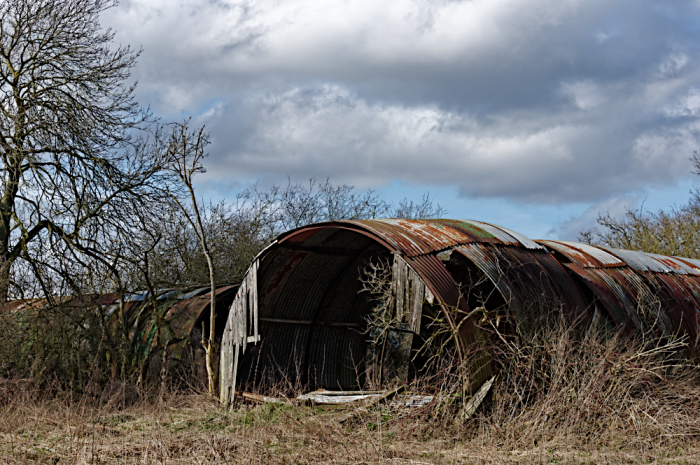 Quick to build, the parts easy to transport, and of flexible design, the Nissen Hut was an ideal solution for the many World War 2 buildings that had to be built in Britain.

They are easy to recognise, with their half round ends and corrugations following the curve of the roof.

RAF Little Horwood was just one of the places these huts were used, and these particular huts were used as living quarters for officers, sergeants and airmen.

As with many RAF stations in WW2, the site isn’t named for the nearest town or village, but for another one nearby. That’s why these huts are just off Winslow Road, Great Horwood.

A typical Nissen hut could be erected on a prepared concrete base in well under a day. They came in three widths; 16, 24, or 30 feet, and could be any multiple of six feet and half an inch long.

These huts are in the common size of 16’ wide by a bit over 36’ long. Made of curved corrugated iron with wooden ends, they were most likely lined but would have been cold in winter and hot in summer.

Some were lined with another skin of corrugated iron, this time with the corrugated iron running horizontally. WW2 photos show barracks huts like these with a pair of coal stoves.

Doors and windows didn’t have to be at the ends; they could be placed in the sides too. Nissen huts were transported almost as a flat pack, and even the curved sections could be nested together, to take up the minimum of space.

There were five other accomodation sites in Great Horwood, including one self contained site for WAAF personnel that’s now partly a mobile home site. Many of the buildings here on Site 3 are gone, but these huts are still hanging on.