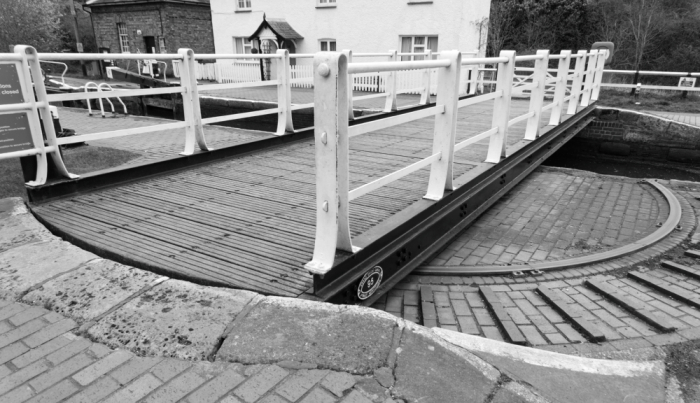 The swing bridge is built over the lock and you can see the track it swings round on here. This bridge was built in 1999, and judging by old photos, is quite similar to the one it replaced. The weight limit sign nearby can’t be the one for this bridge, which probably has about a two ton limit.

In May 1800 the Grand Junction canal opened between Brentford in London and Fenny Stratford. It was a success.

But the next stretch was built on more porous ground and would be trouble; it leaked. To aid repairs, in 1802 the canal company built a temporary lock at Fenny Stratford. That lock is still there; it's Fenny lock.

The temporary lock was installed to drop the water level by about a foot to make repairs easier; most of the leaks were occurring at the top edges of the canal.

The far end of this stretch (or pound) was the first of the eight temporary locks where the canal crossed the Great Ouse valley. They were eventually replaced by the Iron Trunk aqueduct.

The idea was to fix the leaks, then remove the lock. By 1805 the canal company had made an estimate for the repair costs, but the amount of money it would take together with the disruption to traffic meant that no action was taken. 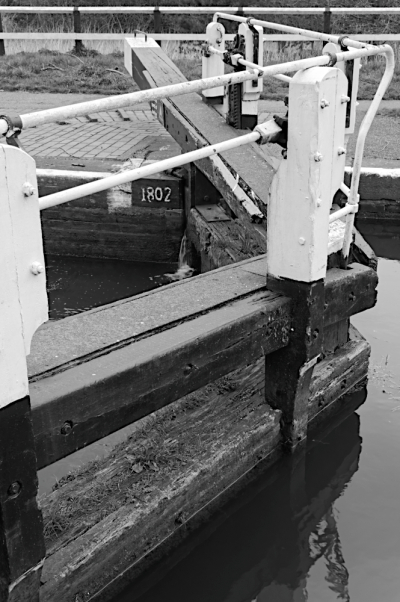 You can see the small difference in the water levels, either side of the lock gates. Note the 1802 date by the hinge.

I referred to this book while researching this post.

In 1838 the company considered raising the height of the water in the pound by six inches by removing Fenny Lock. That also meant dropping the water level in the canal between Fenny Stratford and Stoke Hammond lock; splitting the twelve inch difference across Fenny lock in half.

Again, nothing came of the plans. In that same year the London to Birmingham railway fully opened, a serious competitor for freight traffic with the Grand Junction canal.

The railway expanded, and the line to Bedford crossed the canal next to Fenny Lock in 1846. 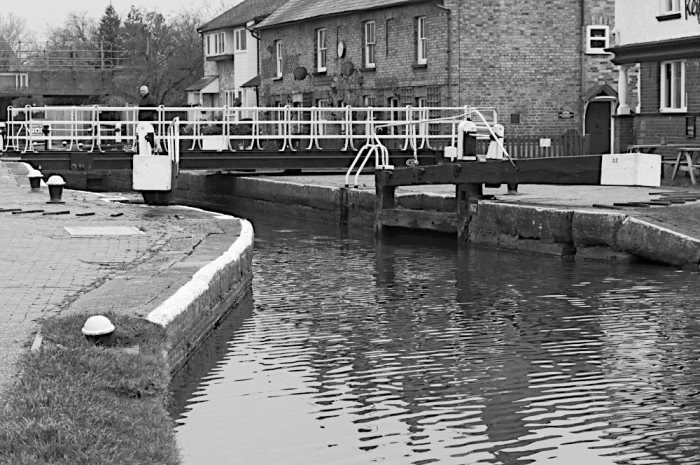 The lock and swing bridge, with a corner of the Red Lion pub on the right. The railway bridge is in the background.

To get to Fenny lock, look out for the sign for the Red Lion pub, on the East side of Simpson road in Fenny Stratford. It’s less than 250 yards from Watling Street. The sign directs you down Lock View lane, but unless you park at the pub, it’s best to park on Simpson road.

Fenny lock is a nice spot to visit even on a cold grey day, as I found when I took these photos. 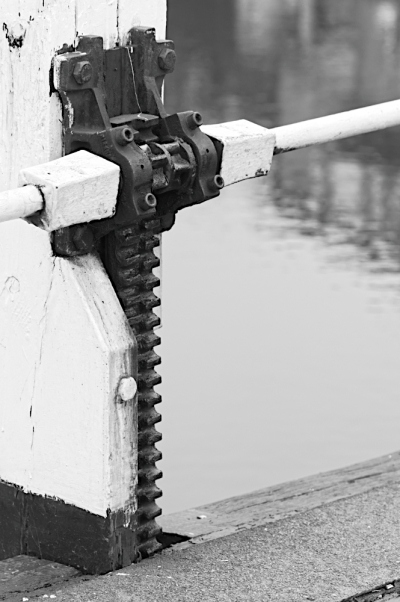 Part of the mechanism that lifts the paddles, letting water through the lock gates. 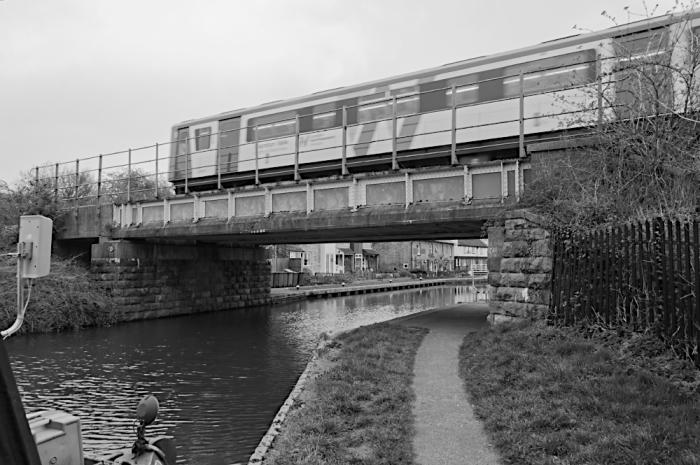 The Bletchley to Bedford part of the Varsity Line opened in 1846, and Fenny Stratford station is just 300 yards away. The Red Lion is just visible through the bridge. 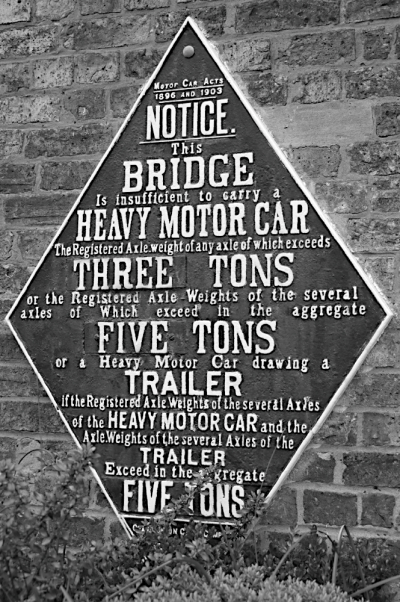 This seems to be the standard diamond shaped weight limit sign from the first part of the 20th Century, and this one is unusual because the bolt on sections saying “THREE” or “FIVE” are still in place. Most signs have had them removed; probably stolen as souvenirs.
Not all of these signs have “Motor Car Acts 1896 and 1903” at the top, but they all seem to have the name of the canal or railway company who built the bridge, in the bottom corner. In this case that section (here behind the foliage) is a separate casting too.

Another great article Roger, some very interesting background info I wasn’t aware of from your research. We lived about a kilometre from the Fenny Lock (from 1955), and I have (once) enjoyed a jar in The Red Lion. Yes, it certainly brought back the memories.

When back in the UK for my mother’s final days (1992), I used to jog along the canal towpath past the lock for my exercise, it’s a very pleasant route, and I was surprised at the number living on barges in that area, who found it the only affordable housing option – I assume this is even more likely the case today? Oddly enough (today being the day after 1 April), it brings to mind a practical joke that appeared that year in the local free-paper (which I initially fell for), where they claimed the local council (in the Woughton area) had bought two Japanese midget submarines for use by their inspectors, so they could surprise barge dwellers who would otherwise see them coming and scarper before they could check their berth permits!!

Now, on your ref to the swing bridge having a limit of around 2Ton – as it was only a footbridge, that should have been more than adequate, any vehicle crossing wouldn’t have anywhere to go as it only led to the narrow towpath.

On the weight limits sign: the one shown I assume relates to the Watling St bridge over the canal just down from the Fenny traffic lights, and I have a few queries if you don’t mind.

Where is the sign displayed – one would assume it would need to be seen by traffic intending to cross the bridge? And I’m surprised that trucks we saw up and down that stretch of the Watlings St were always under a laden weight of 5 tons, it seems such a severe limit these days with more massive vehicles the norm.

So, the “Three” and “Five” pieces of texts are actually detachable plates bolted into slots in the background template (with its reusable unchanging text)? This diamond plate info seems a bit odd though – any vehicle with a laden single axle weight of 3 ton would have more than one axle, so it would be over the 5 ton limit anyway, so why does it need any ref to a single axle limit?

Thanks again for an interesting trip down memory lane.

there's a few people living full time on the canal; I know one or two of them.

The weight limit sign is on the pump house, directly across the canal from the pub; certainly not in it's original position but I don't know where that might be.

Yes, the plates are detachable. Regarding the amount of tons, a vehicle carrying a heavy load over the back axle (say, a heavy bit of early 20th Century cast iron machinery) might be three tons on that axle, and much less on the front one.

Hi Roger,
great to see The Red Lion survives, not all pubs have, and it's location is not exactly prime. In the 50s it was even more competitive, there were two pubs only yards away from The Swan Hotel (on the Watling St in the direction of Fenny railway station), another one almost opposite the hotel (The Bull & Butcher?), then one near the canal bridge, two in Aylesbury St [The Bulls Head (I think), and The Malsters Arms] and one on the corner of Victoria Rd and (I think it was) Denmark St. What a boozy lot we must have been!

I see I had a typo in my last post - it was 1955 when we moved to Bletchley (not 1995). Finally, after clicking on "Subscribe" the first step entailed details required to set up a Google account, and it eventually spat out a G-Mail address it had selected for me, which had me almost fall off my chair - it has used the Woughton address we lived at from 1949 - mid 1955 - how on earth could the system have known that?