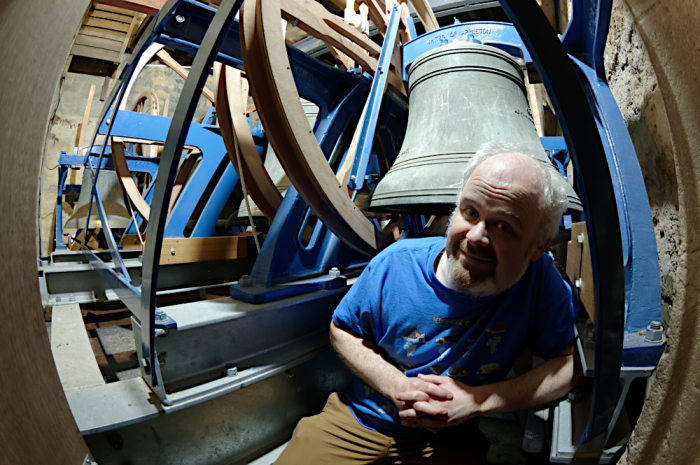 By 2012 Hanslope church’s bells had become increasingly difficult to ring.

After an inspection by the bellhangers Whites of Appleton, the church decided to have the eight bells retuned and refurbished, and hung in a new frame.

The new frame would have provision for adding two more bells, and be placed lower in the tower; this would reduce the amount of movement in the tower when the bells were rung. The old frame is still in place above the new one.

It wouldn’t be until September 2019 that the work began. The bells were removed and taken to the Whites workshop at Appleton, Oxfordshire.

As ever with refurbishment work it all takes longer than planned, so it wasn’t until August 2020 that Whites brought the bells back to St James the Great’s, and began to replace them in the tower.

I took this photo at the church’s open day this year, and a little while later I managed to be at the top of the tower by the base of the spire when they rang the 22 cwt tenor bell.

The tower still swings a bit, but certainly not as much as when the bells were mounted higher.

Hanslope's spire is the tallest in Bucks, at 186 feet. I wonder how much the top used to swing when the bells were in their old higher position…

I used this lens for the photo in this post.