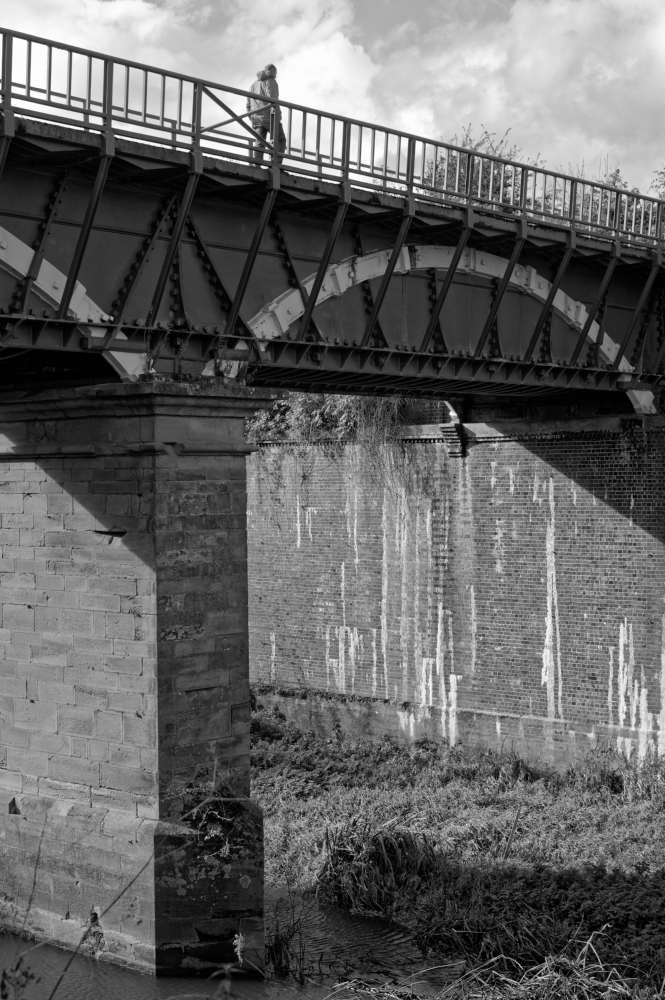 1792
In July, a meeting is held in the Bull Hotel in Stony Stratford to attract subscribers to the planned Grand Junction Canal. So many people turned up that the meeting had to be moved across the High Street to the church. But it was still a crowded meeting.

The canal (now part of the Grand Union Canal) would run from the Oxford Canal at Braunston in Northants, to Brentford. on the Thames in London. It would be nearly 93 miles long with around 100 locks. 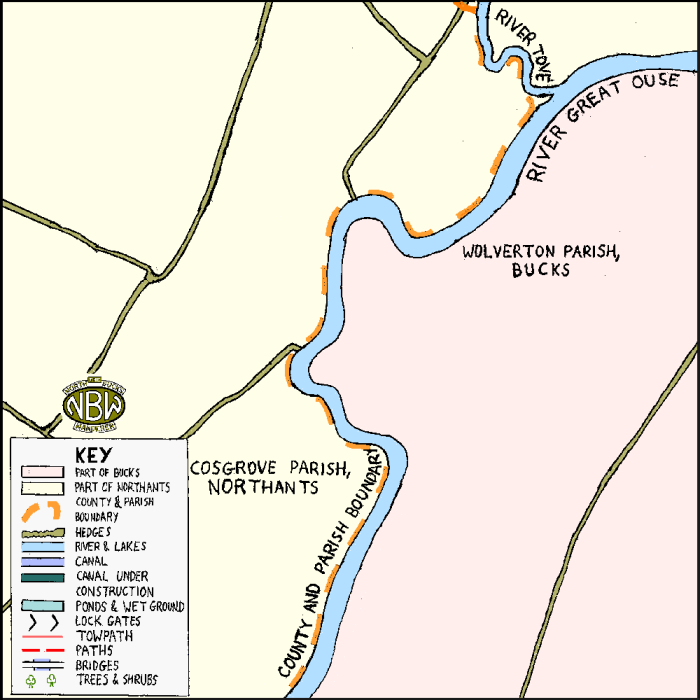 Before the canal came, there were just fields here. The county and parish boundary ran along the North bank of the river, until it turned to follow the course of the River Tove. There may have been more hedges than I’ve shown here, but any trace of them is now under the embankment.

1800
The original plan was for the canal to cross the Great Ouse at river level. this wasn’t great for several reasons:

There would be a time consuming flight of four locks on each side of the valley to make the change in levels; around 40 feet down and back.

The crossing would be the lowest point in over 50 miles of canal, and much canal water would be lost into the river.

It would be hard if not impossible to take a boat across when the river flooded.

Instead, an aqueduct and embankments are proposed. A temporary canal with two flights of four locks is built and opens that September, to one side of the proposed embankment.

The Wolverton end of this stretch started at the angled wall of the present day wharf. The Cosgrove end joined the existing canal at the winding hole just this side of Cosgrove lock. 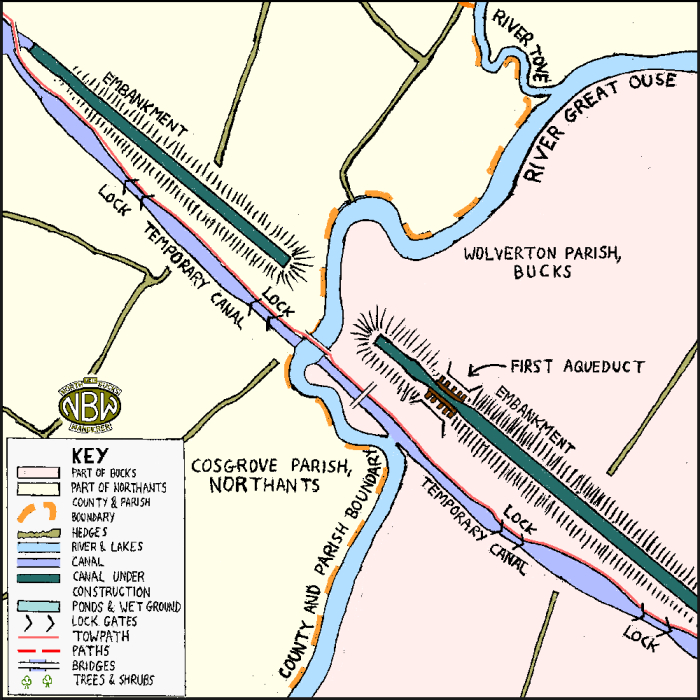 The first aqueduct was built on dry land and the river diverted later. There’s a temporary gap in the embankment for the river. I think the river would have been widened where the temporary canal crossed it, so the river water slowed and did not push the boats sideways so hard.

But I think the boats would still have needed help crossing. Boats heading South East would need pulling against the cross flow, from the narrow island between the canal and river, so I’ve shown a bridge to that island. Boats heading the other way could be pulled from by the lock on the North West side of the crossing.

1803
In August, work begins on the embankment and the first aqueduct. It would have three arches of brick and stone, with a wooden trunk lined with clay. It is built on dry land, and the river will be diverted through it later.

1805
The river is now fully diverted. The aqueduct opens to traffic on the 25th of August. It is said that its arches were already sinking.

The county boundaries follow the North bank of the river. Now the river has been straightened to run through the aqueduct, the boundary will be changed to follow the new course.

A small part of Buckinghamshire is lost to Northamptonshire, which also means that same bit of land changes hands from Wolverton parish to Cosgrove parish.

1806
In January, part of the embankment near Cosgrove collapses. It is repaired, and the contractor is blamed. At about the same time a permanent leak is found in the aqueduct.

1808
In February the aqueduct collapses. The lock keeper at Cosgrove is first to notice the disaster, at 11 pm. He closes his lock gates and sends out the alarm.

Two of the three arches have collapsed. Enough water is able to pass through the more or less intact Northern arch (which had been shored up with timber shortly after the aqueduct opened) to prevent the Ouse backing up and flooding Stony Stratford.

The contractor is again blamed after an investigation, and later loses the matter in court.

The temporary canal is reopened.

A temporary wooden trunk aqueduct is constructed, and finished in June. 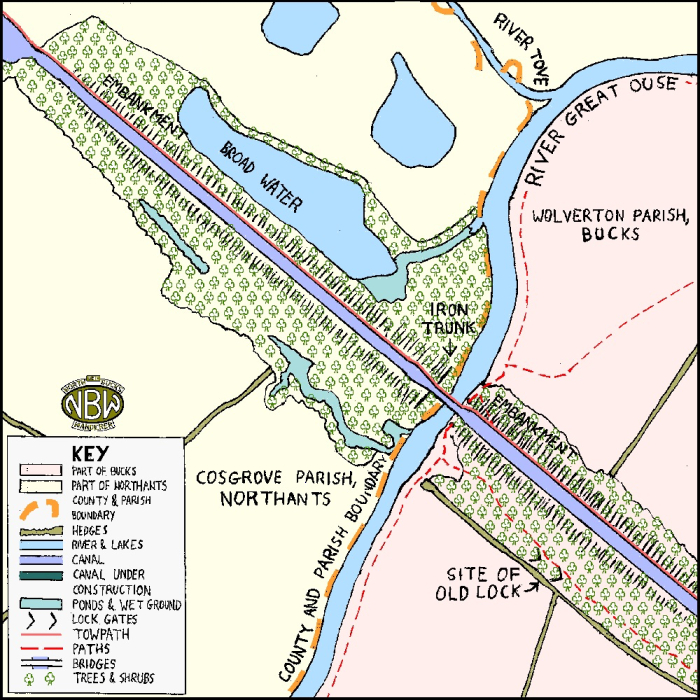 The valley as it is today. There are remnants of the temporary canal in the form of ponds and wet land, and hollows in the woods. There are some old lock gates on the site of one of the old locks, next to the path.

The path along the bank goes under the canal through a tunnel; a cow creep. The path joins up with the towpath. The county and parish border was changed to follow the new course of the river some time in the 18th Century; Bucks and Wolverton have lost some land. 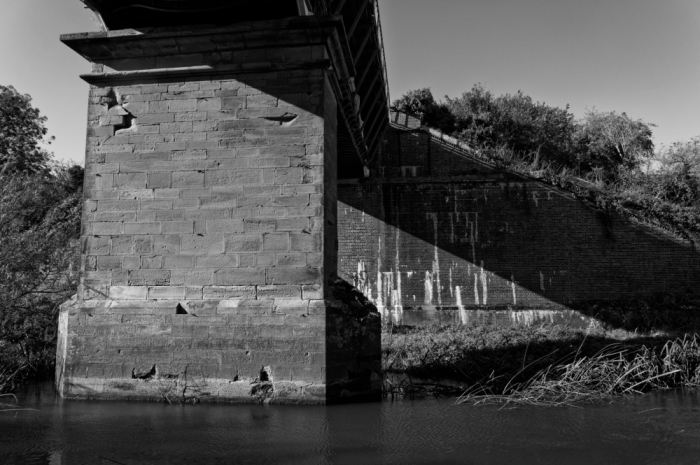 The central stone pier, and behind, one of the brick faced abutments.

1811
The Iron Trunk aqueduct opens on the 21st of January. It is made of cast iron sections from the Ketley Iron Works in Shropshire, sent down by canal and assembled on site.

1919
The stone abutments on each side of the river are rebuilt and refaced with brick. The job won’t be completed until 1921.

1921
The aqueduct is drained for maintenance for the first time.

1931
The Iron Trunk aqueduct is repainted.

1986
The Iron Trunk is drained for maintenance, for only the second time.

2021
Over two centuries since it first opened, the Iron Trunk aqueduct is still in use every day. There are remnants of the temporary canal still left on the Buckinghamshire side of the river, and some ponds and wet ground across the river where that canal once ran.