How to Recognise: Medieval Church Windows 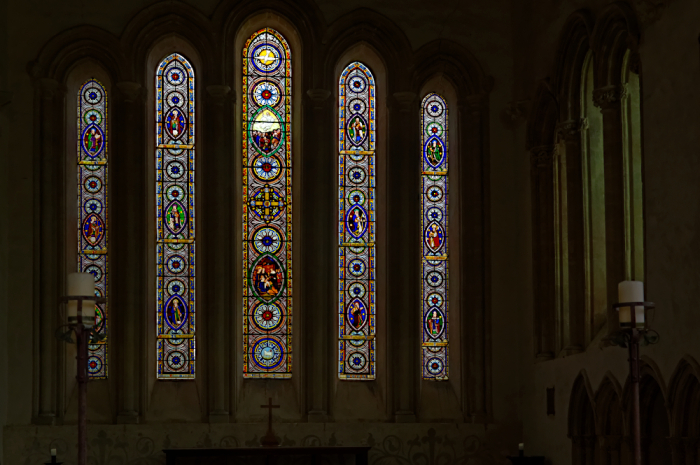 Lancet windows in the chancel at St. Mary and St Nicholas' church, Chatwode. There are three lancets in each of the North and South walls, (you can see the edge of the South lancets on the right) and a nice set of five stained glass lancets in the East wall.

This is the second part of a short series; a guide to identifying church windows. In this short series you will learn to recognise their type and approximate age, and from that you may be able to work out the age of that part of the church. Usually these identifying details are just in the top section of a window.

But you will often find later windows inserted into earlier walls. For example, in Wing church there’s a 14th Century Medieval window in a 9th Century Saxon apse. 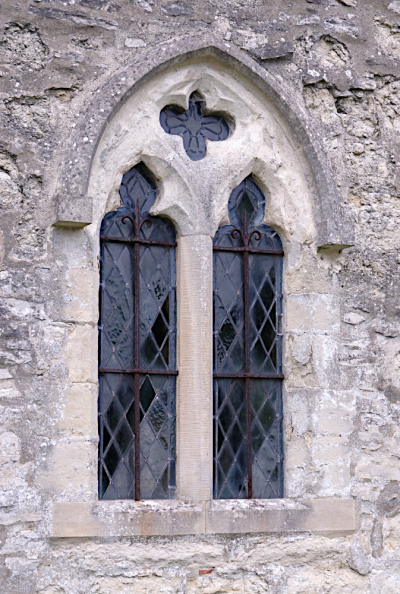 Plate tracery at the church of St. Peter and St. Paul, Dinton. I think this is a bit further along in the evolution towards bar tracery than some earlier, plainer examples. This photo replaced one of a plate tracery window from the gothic Revival period; this window is an original example.

From around 1220 the tall thin lancet window began to be used on it’s own or in groups as at Chetwode (top). The hoodmould, that ridge of stone above a window that directs rainwater away, would cover a group of lancets but leave a space above.

This space began to be used for small additional windows, to produce what’s known as plate tracery. 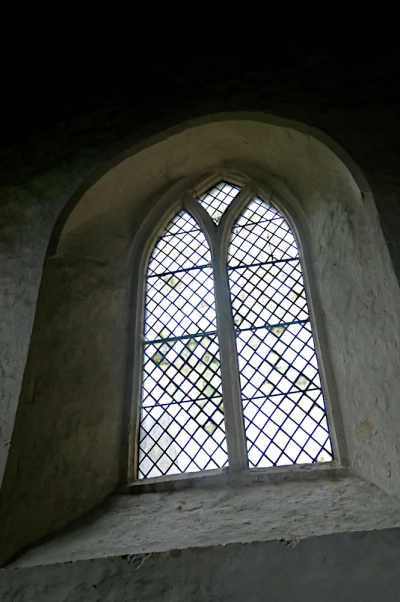 Over time window designs evolved and the stone between the lancets and between the additional windows above became thinner. It became the bar tracery that we can see between the areas of glass in a window.

That section of a window that in earlier times would be a lancet, is referred to as a light; you might have a two or three, or even as much as a seven light window. The vertical bar tracery between each light is a mullion.

The development of the pointed arch instead of the semicircular Norman type meant there was more flexibility in the shape and size of windows.

I used copies of the two books above (these are Amazon links) while researching this series. 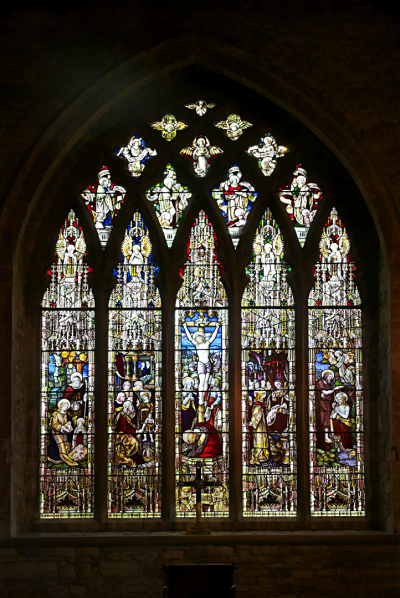 At the end of the previous period there’s a bit of an overlap with start of the Decorated period, when there are Geometric designs with repeating shapes like the East window of St James the Great at Hanslope. A different, perhaps more obviously geometric window can be found at Broughton.

Early Geometric windows could have circles, or three lobed shapes known as trefoils, or four lobed quadrofoils of glass above the lights. 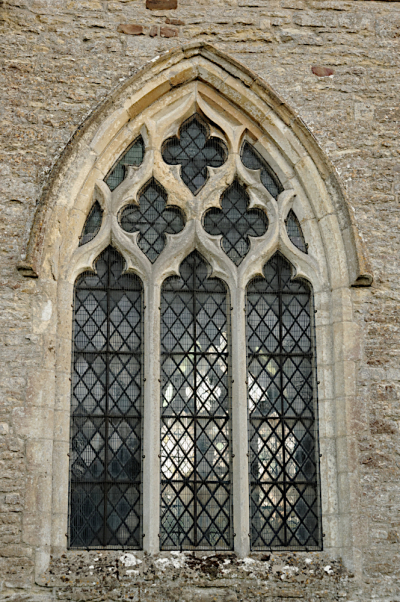 This Geometric period window at the church of St Lawrence, Broughton, has quadrofoils in a repeating pattern. You can imagine the pattern extending beyond the window edges.

In this period cusps began to be used. Cusps are pointed shapes on the edge of the tracery pointing into the glass; four cusps inside a circle of tracery would create a quadrofoil. Later in this period came Reticulated designs like the South aisle windows in Olney church, where the bars form convex and concave compound curves. 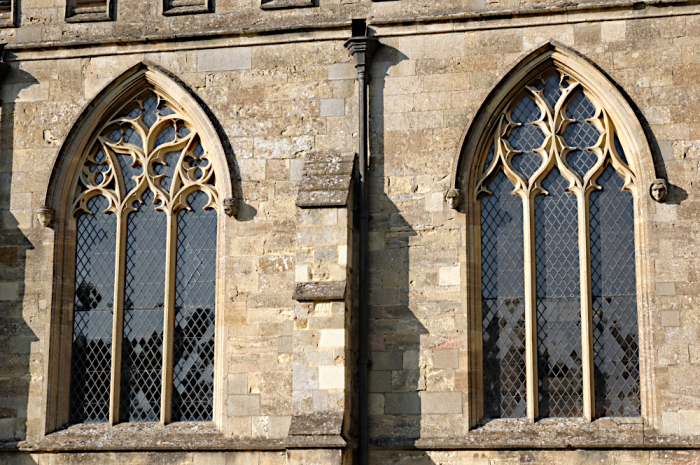 Reticulated windows in the South aisle of St. Peter and St Paul's, Olney. Not every bit of tracery has to be an ogee curve, but you can see ogee arch shapes at the top of the middle light in the left window and at the top of each light on the right. There's also plenty of cusps.

Late in to the Decorated period came flowing tracery. Normally, the simple geometric shapes were abandoned in flowing tracery windows, though you can see a couple of quadrofoils in Great Horwood's fine East window.

The Decorated style lasted into the 15th Century, only slowly giving way to the next type, the Perpendicular. 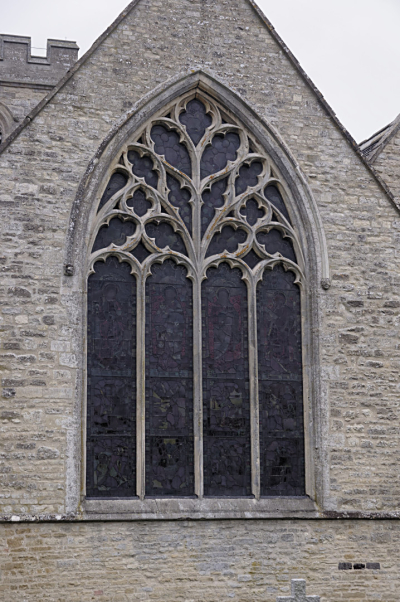 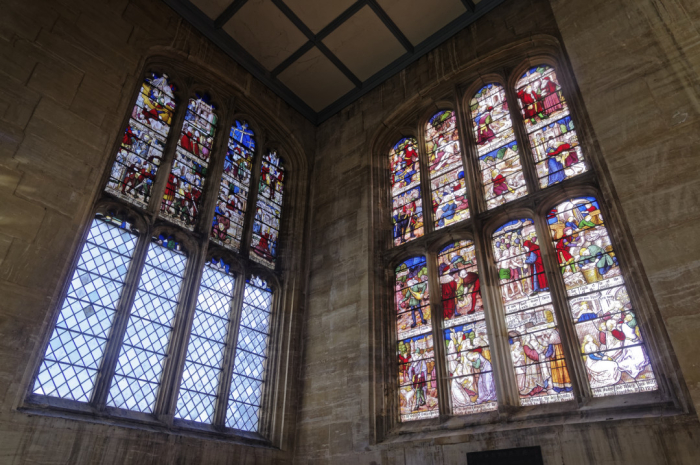 Large windows and thin walls in the Perpendicular style at All Saints, Hillesden let huge amounts of light in. You can see these windows from the outside in the centre of the picture at the top of part one. There are no buttresses on the outside of this part of the church, because the walls at right angles brace each other.

Easiest to recognise, the Perpendicular style was a great leap forward. It’s named for its straight vertical mullions. These perpendicular mullions now extended all the way, or most of the way, from the base of the window to the top.

This is a strong design, so allows for much bigger windows with bigger lights and more scope for stained glass.

Churches like this have deep external buttresses that mean the walls can be made thinner and still be strong.

The light from the windows is not obstructed inside as much as it would be with the older, thicker walls. Perpendicular churches like Hillsden are light and airy. 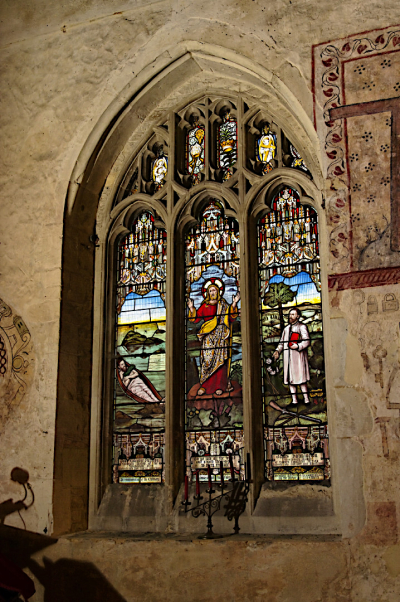 This Perpendicular window is at Broughton.

I like the Perpendicular style, but I also like the Saxon and Norman windows, set into their massive church walls. Next week we will look at windows from the classical period.