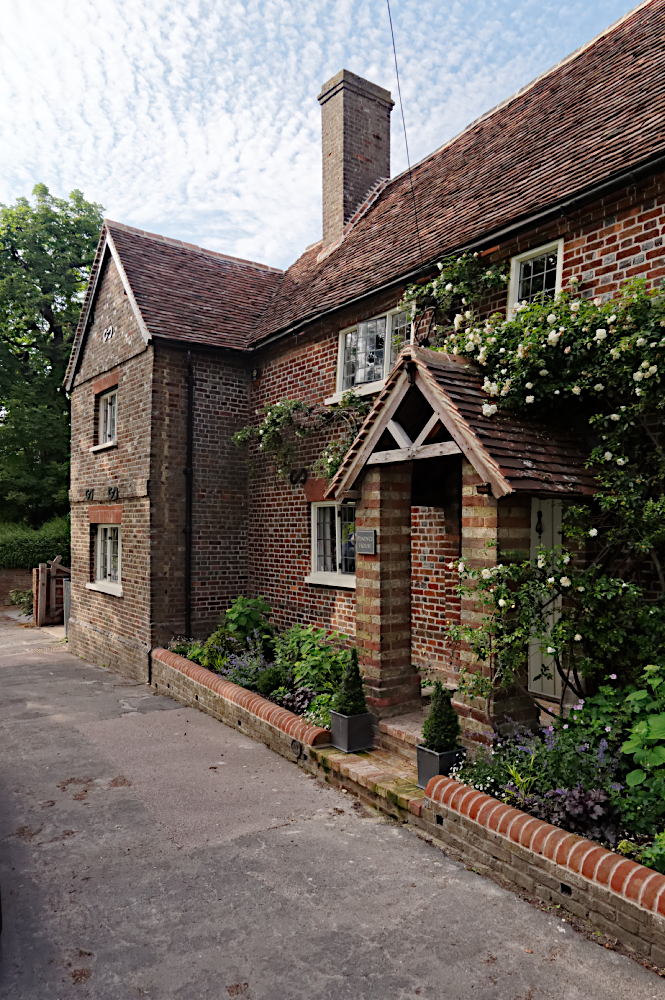 A Medieval house lies behind this more modern seeming brickwork. This is 12 and 14 Station Road.

This is Ivinghoe, a small town at the foot of the Chilterns and the location of today’s Secrets of… Walk. The total length of this walk is three quarters of a mile, and you can park in the High Street by the Town Hall, or on Station Road opposite The King’s Head. In Station Road at least, there are no time limits or charges.

Your first stop is 12 and 14 Station Road, just down from the pub. This building is far older than it appears, having been built in the late 13th or early 14th Century as an aisled hall. Inside it would have originally been open to the roof; only later was a first floor installed.

There was no chimney until the central stack was inserted in the 16th Century, and the building was either encased or perhaps replaced with brick in the 17th Century.

The 17th or 18th Century cross wing on your left replaces an earlier service wing. On the right hand end was once a solar, the private quarters of the family. 10 Station Road is on the site of that solar, and has internal exposed framework that may well be part of the original solar.

No. 10 is late 17th century, and like many in the town is timber framed and clad in brick. There’s probably other buildings in Ivinghoe that have parts of much older buildings in their construction, perhaps not yet discovered. 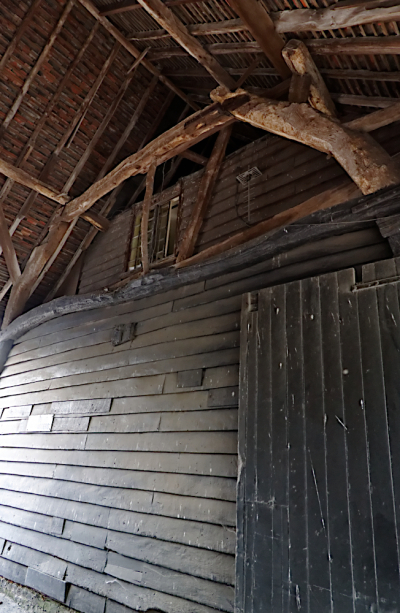 The curved cruck beams originally came up from the corners all the way to the roof apex.

By the steepness of the roof, it would have also once been thatched. Next door is the end of the long wing of The King’s Head pub that extends all the way up to the junction.

Part of this wing incorporates a Medieval cruck built building. You can see large parts of cruck beams inside the carriage entrance at this end. As seems usual in Ivinghoe, the pub has been re-cased in brick but much of it is late 16th to early 17th Century. 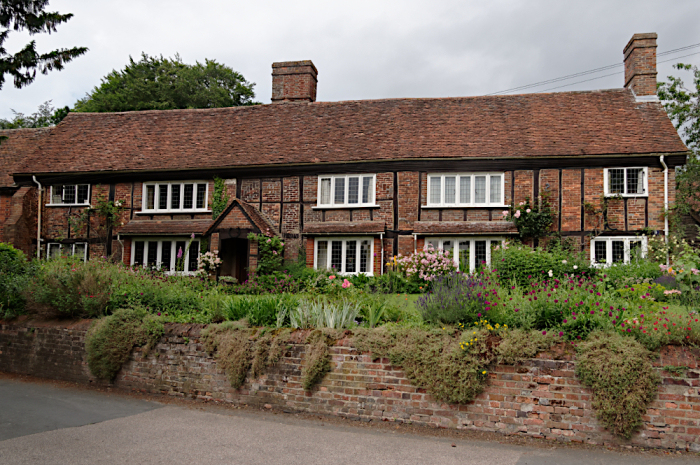 9 Church Road is on the junction with Vicarage Lane.

On your left is “The Old Vicarage”. It looks Tudor but it’s really 18th Century. 9 Church Road is the long, half timbered house ahead of you, facing down Church Road. It’s not easy to spot, but there’s a Sun fire insurance plaque high up on the front wall above the porch.

Vicarage Lane has some nice cottages, many 19th Century. The tall odd looking house, No. 16, is The Grain Store. Not far past it is The Rose and Crown. As far as we know, the pub is a 19th Century building and although there have been alterations, you can still see its original nicely proportioned design.

Walk back up Vicarage Lane to the junction and cross the main road. Head down the hill and go into the churchyard at the gate.

Until the mid 19th Century, the churchyard was surrounded by buildings, built along the road side. They were gradually removed until the last one was demolished in 1928.

The large church of St. Mary the Virgin was erected in about 1220 as a cruciform church with a central tower. The tower is 14th Century and replaces an original one at the crossing. If you look at the North wall of the chancel you’ll see where two big lancet windows have been blocked up; these were probably the original windows.

There are still some lancet windows in place around the church, but as usual, many of the windows are later insertions. I wasn’t able to go into the church, but I hope to return here and to the other churches in the Secrets Of… series to have a look inside when the lockdown is over. 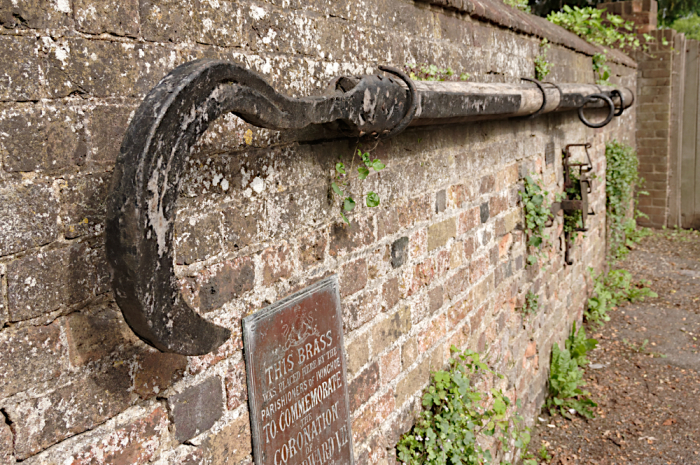 The thatch hook on the churchyard wall, by the South gate.

Leave the churchyard by the bottom gateway. To your left, attached to the outside of the churchyard wall is a great big hook with a long wooden handle. It’s a thatch hook, used for pulling thatch from roofs to prevent fire spreading. It hasn’t been used for a long time, partly because no houses in the town are thatched now.

Under the hook is a brass plaque marking the coronation of Edward VII in 1902, and, er, a man trap. Used, a sign says, on private property to discourage intruders… Well, yes, I’m sure it would. The man trap has had its jaws removed, and I’m not surprised. The door of the manager’s house for the old Meachers Brewery.

Just down the hill is a fine big three story house. Once a youth hostel, this early 19th Century building was built as the manager’s house for the Meachers brewery.

The brewery employed 60 men and delivered to 200 local pubs. When it closed in 1927, most of the brewery buildings were demolished. Take a look at the date stone on the single story part of the house on the right hand end; you might be surprised at the year.

Next down the hill is the Town Hall. Formerly a market hall with a court room above, it was built in the 16th or 17th Century. It has a jettied front with stone brackets and is still an important part of town life.

There’s a shop and post office, and a library on the ground floor. Upstairs is a hall for meetings and events. The building probably replaced an earlier market hall on this spot. 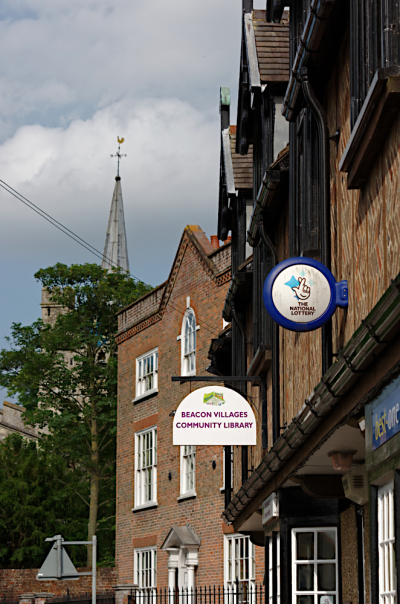 The Town Hall, the Meachers Brewery house, and the church in the background.

Next door to the Town Hall is 9 High Street. Timber framed and, you’ve guessed it, 17th Century. Down the hill and right up against the path is the large half timbered 23/25 High Street. It’s 16th and 17th Century.

A little further along, just past the modern house called Newland Lodge is Green Lane. The lane is a bit hard to spot and narrow, but there’s a public footpath sign. The lane leads to a great field behind the town, and to Pitstone windmill (More about this next week). It’s a mile round trip to the mill, but there’s a car park out of the town that's a lot closer to the mill. 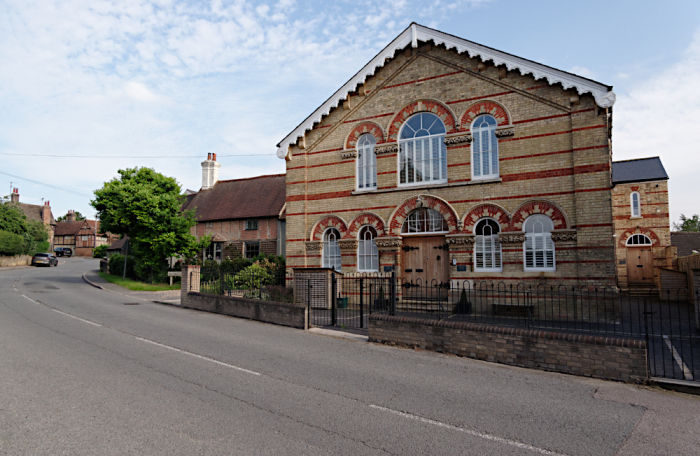 The ornate Methodist chapel, with Yew Trees behind.

A little further down the high Street on this side of the road is the large house Yew Trees. It’s 16th or 17th Century and it’s one of several large houses from that era; Ivinghoe must have been quite a wealthy town.

The last building before the pavement runs out on this side is the Methodist chapel. Many Methodist chapels are rather plain, but this one is nicely decorated. Its foundation stone was laid in 1865.

Cross the High Street here. There’s a row of eight semi detached houses all of the same design on this side of the road, built for returning World War 1 soldiers. Not far beyond the last one is the edge of the Medieval town. Walk back up the High Street on this side. 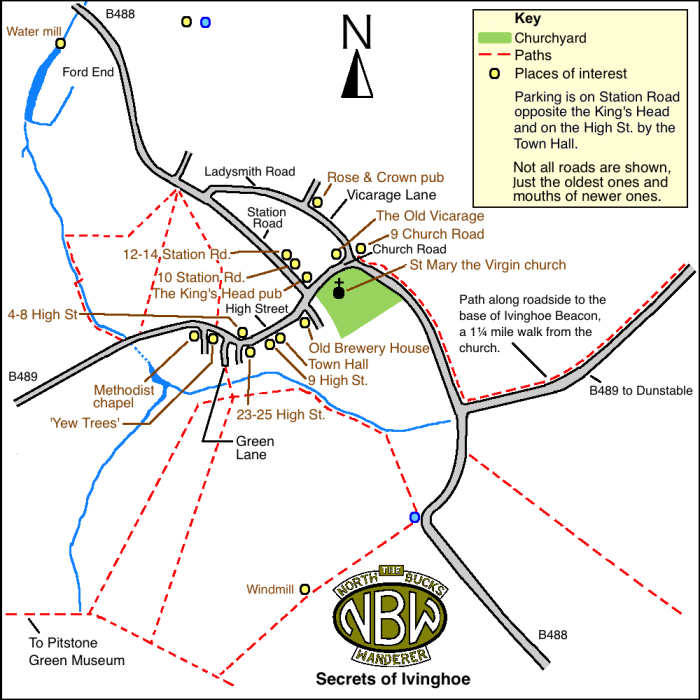 The places of interest on this map that are away from the town will be covered next week. I do not recommend taking the roadside path to Ivinghoe Beacon; it is overgrown and narrow.

On the left hand bend are three houses together. No. 8, Windmill cottage, is 17th Century and you can see that although brick, it’s been refronted; you can see the edge of the double row of facing bricks on the front corner behind the drainpipe.

No. 6 is 16th Century and it was also refronted in the 18th. Don’t miss the village pump in the front corner. No. 4 looks like it’s 18th Century, but look at the half timbered gable end and you’ll see it’s yet another refronting job.

This is the end of the walk, but you can get a takeaway drink and cake at the Curiositea Rooms, right next door to No. 4 in the old Victorian school and open mid morning to mid afternoon. Or you can go to one of the pubs; food is served in both.

There are lots of other things to see and do near Ivinghoe too; more about these next week.