Secrets of around Ivinghoe. 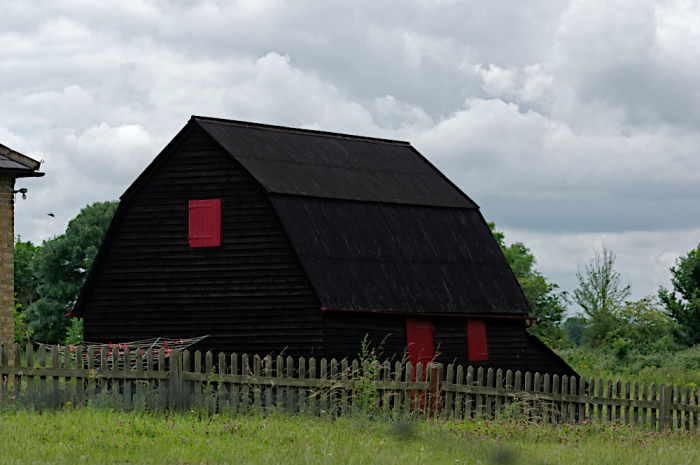 The Icknield Way hits an important spot at Ivinghoe, where it divides to become the Upper and Lower Icknield Way. The Upper Way goes along the top of the Chilterns, the Lower Way along the foot.

The Icknield Way is ancient, though there’s some debate at exactly how old it is. What’s certain is that the area around Ivinghoe is rich in history. Here are just some of the places you can visit that are close to the town.

This post follows last week’s Secrets of Ivinghoe guided walk post. As ever, more details at the links.

Open to visitors on certain days and times, this mill is known to have been working in 1616, but is probably even older. It was still in use up to 1963, and is the last working watermill in Bucks with original machinery.

In the tailrace below the mill is a sheepwash, quite an unusual feature. The millpond is the moat of a 13th Century homestead.

The mill is open on alternate Sundays from May to mid September (if Covid restrictions allow) from 2 pm to 5 pm. They have milling demonstrations (water levels permitting), and welcome school groups. 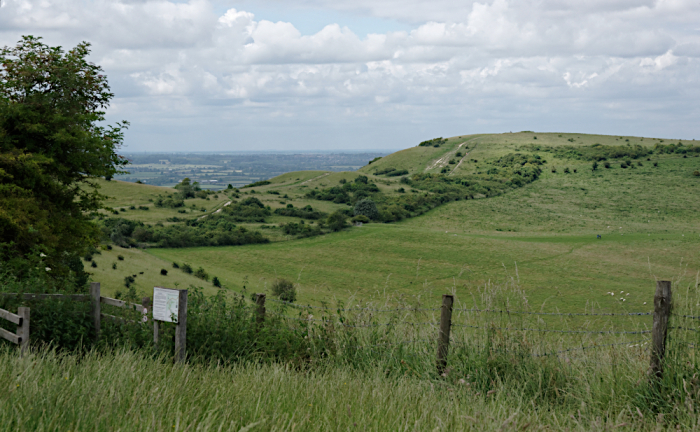 Ivinghoe Beacon, from the car park.

These hills are a great place if you want to see spectacular views of the countryside. The most well know hill is Ivinghoe Beacon, 764 feet above sea level.

There’s an Bronze Age hillfort on the top of the beacon, believed to be one of the earliest in Britain. You can also see Bronze Age burial mounds throughout the area.

There’s a footpath from the side of the minor road to Ashridge (off the B489) known as Beacon Road where you can climb the steep side of the Beacon. The bottom of the path is just past the cattle grid, but there’s nowhere to park anywhere near.

It’s a mile and a quarter from the middle of Ivinghoe to the bottom of the footpath but the path alongside the fast B489 is very overgrown; in some places it is only a foot wide and I don’t advise it.

You might prefer instead to drive the three quarters of a mile up the side road to the car park; it’s on your left. From there, it’s about two thirds of a mile to the top of Ivinghoe Beacon but it’s an easier, flatter walk. If you can’t walk far at all, you can still get fine views from the grassy area by the car park. 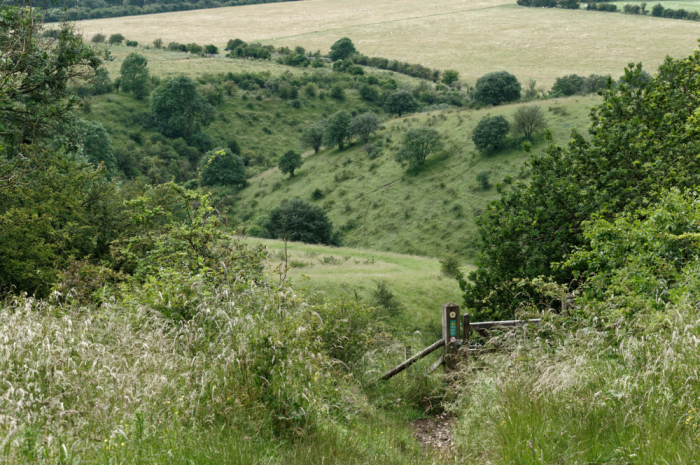 Incombe Hole. You can walk from here back into Ivinghoe.

There are more car parks further up the road. I went to the Steps Hill car park. It’s just a quarter of a mile further along Beacon Road, on the right just before the second cattle grid.

The car park has an information board with a map. The board says that Steps Hill took its name from deep parallel gullies created by erosion from years of cattle droving.

The board’s a bit vague about where they are and I couldn’t find them. My local man later told me that they aren’t very impressive, so perhaps that’s why I could not spot them. the rest of the board is quite helpful.

I took the path that starts by the board and leads through the wood, and found a great view of Incombe Hole below me, with Ivinghoe and the windmill beyond. There’s far more to see in these hills than I have room for here, so click on the link above for more information; it takes you to the National Trust website. 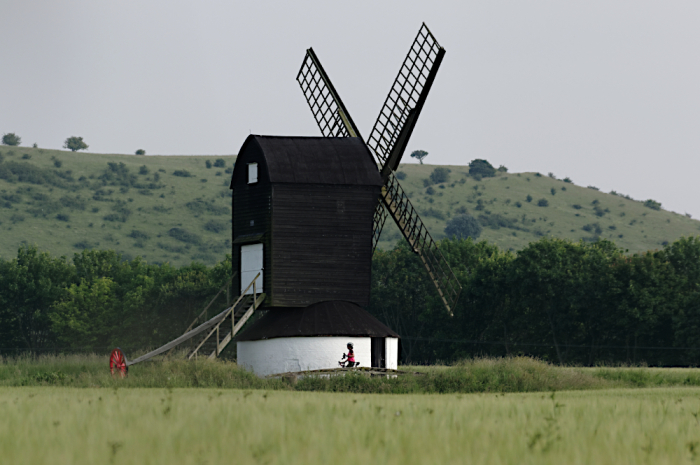 This is a post mill. The whole mill has to be turned into the wind by hand.

Pitstone is believed to be the oldest windmill in the British Isles. The date 1627 is the earliest one carved into the mill, but it may be even older; “1627” may have been carved there when the mill was refurbished.

Windmills lead a hard life so it’s not uncommon for them to have undergone extensive repairs over the centuries, and this mill suffered catostrophic damage during a violent storm in 1902.

After rotting in the fields for 35 years it was given to the National Trust. They eventually rebuilt it, and in 1970 it ground corn for the first time since the storm. But it can’t be run now because the sails cause too much vibration as they turn.

The mill is a one mile round trip across the fields from Ivinghoe, or you can leave your car in the car park just a few hundred feet from the windmill, on a corner of the B488. 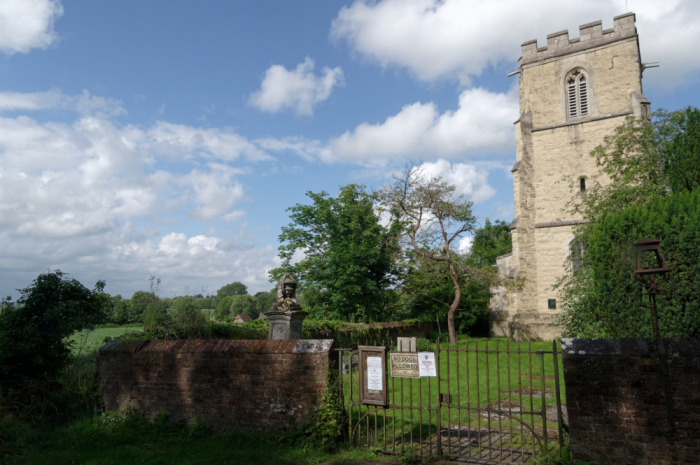 This 13th Century church sits on the hillside out in the fields and away from the new village. They have a Norman, locally made “Aylesbury” type font and Medieval floor tiles in the chancel. There’s also a Medieval chest and some nice carvings. I’m going from an old, probably 1970s guide here, as I wasn’t able to go in.

Judging by a plan of the church, the chancel doesn’t line up with the nave, being several degrees out. This isn’t uncommon in old churches, but nobody knows why.

The church is signposted off Church Road in Pitstone. They will be open on Sundays and Bank Holidays up to the 26th of September, from 2:30 to 5:30 pm. There’s a toilet on site that’s open when the church is. 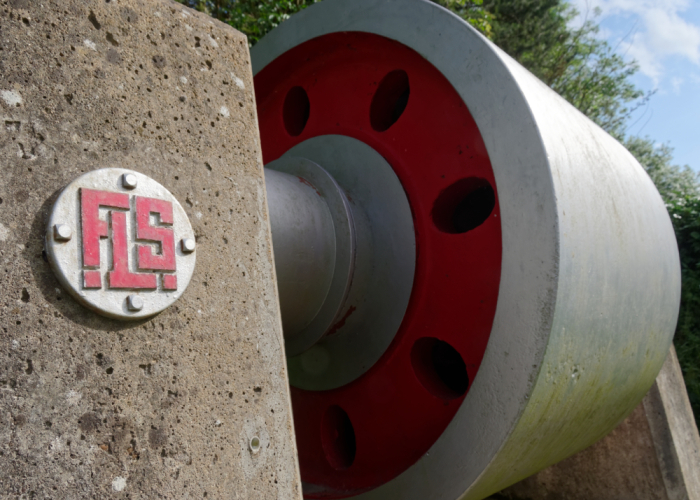 A six ton roller at the entrance to the museum.

This fine museum of rural life opens on one Sunday a month until October, and also opens on the August Bank holiday Monday. They say that a visit could keep you occupied all day. Sounds great!

It’s been a few years since I last went there and I found it was very good, but my local informant says that the museum’s changed a lot since then and it’s even better now.

The entrance is on the first bend going South away from the B489 roundabout in Pitstone and you can spot it by the huge roller by it, that came from the cement works. Hours are 10:30 am to 4:30 pm, and like Ford End Watermill, they welcome school groups.

If you don’t live locally, as there’s so much to do and see you might like to stay here for a few days. If you like camping, Town Farm has a quiet and simple campsite close to the town. They say that they pride themselves on their clean facilities but there’s no shop, cafe, or on site entertainment.

This doesn’t matter, because the centre of Ivinghoe is only a ten minute walk away through the fields, and in the town are a shop, a cafe, and two pubs.

I haven’t used this camp site, but I have done a lot of camping and it looks like a good site to me. They have plenty of good reviews, too. They welcome Duke of Edinburgh Award candidates and Scout groups.