Home Subscribe Affiliates Commenting... Contact About
Lights Round Milton Keynes
Is This a Gargoyle, or is it Just Grotesque? 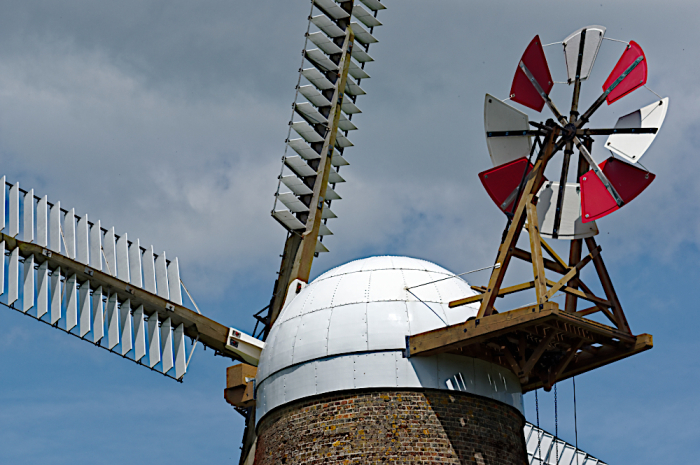 The cap and fantail of Quainton's windmill.

Quainton is very well known for its many half timbered buildings. I can’t tell you about you about all of them, but when you see them around the village, just assume they are 17th Century; you’ll almost always be right.

This walk is three quarters of a mile long mile, or a mile and a half if you choose to do the long version with the views. You can usually park on the Green (See the map), and this walk starts on the lowest point of the triangular grass part of the Green.

At your feet is a manhole. It’s not very old, but it’s where one of a system of village pumps once stood. If you listen carefully, you may be able to hear running water. The pump on this spot was the second one in line; you’ll find the first one on Church Street. 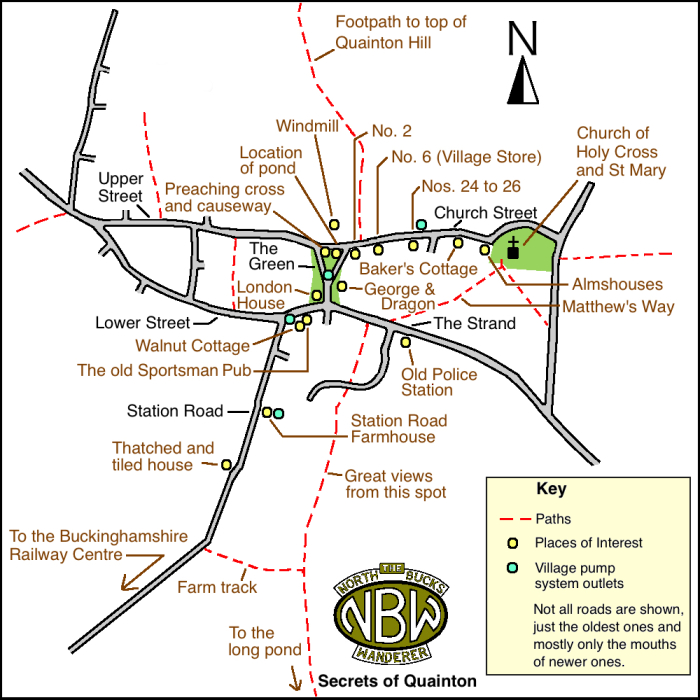 On the top edge of the triangle is the preaching cross, erected in the 14th Century by the Knights Hospitallers of nearby Hogshaw. Along the top edge of the Green is the Causeway. As far as I can make out, this is the largest visible remnant of an old system of paved paths in the village.

Until it was filled in around 1960, there was a pond at the top of the green next to the Causeway, and it’s possible to see where it was in the grass. Near the cross there used to be a whipping post, and there were stocks too.

The most obvious building in Quainton is the 1830 windmill. The tallest mill in Bucks, it’s a cap mill. The red and white fantail turns the sails and cap to face into the wind with a system of gears.

The windmill reopened on Sunday May 23rd from 10 am to 12:30 pm, so I think that means (they don’t say) that it will be open every Sunday from now on, at those times. 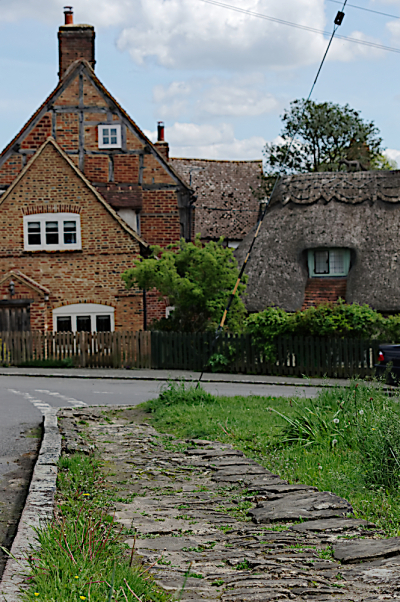 The Causeway on Quainton's village green. 2 Church Street is on the left in the background.

From the top of the Green, walk into Church Street. No. 2, the first house on your right, is one of the oldest buildings in Quainton; it dates from the 15th and early 16th Century.  On the bottom edge of the jettied first floor is a finely moulded bressemer beam. Originally, the first floor was all just one room. There’s a cellar too.

6 Church Street with the ammonites set in the gable end wall is the Village Store, and one of the few listed buildings in Quainton you can enter. The store sells pies and snacks and soft drinks. They are open every day, but close early on Saturday, and only opens in the morning on Sunday. The store also contains the Post Office.

Almost opposite is the bottom end of a public footpath that leads up to the top of Quainton Hill. You might like to take a walk up there, but be warned, there are tales of a headless horseman that haunts the hill; best to go in the daytime. 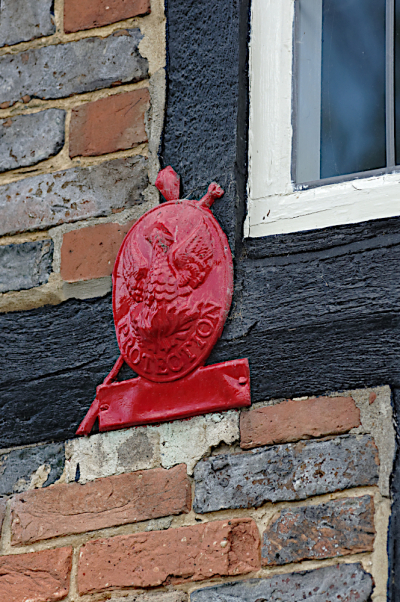 There’s no need to guess the age of 24 and 26 Church Street; the date is on the front wall. Above the date is a red painted Phoenix fire insurance plaque. Just past the end of No. 26 but on the other side of the road is the first village pump in the system, fed from a spring or springs up on the hill.

Underneath the pump is a reservoir. When it’s full, an overflow pipe takes water to the next pump down the hill; from here it’s to the one that used to be on the Green. When that reservoir is full, its overflow feeds the next one, and so on.

The next pump is at the top of Station Road, and the one after that was in the yard of Station Road Farm. The last point was for watering livestock, somewhere South of the farmhouse. Mains water came to Quainton in the 1930s and the pumps fell out of use.

No. 32 is Baker’s Cottage. Never a bakery, it was named for the generations of the Baker family who once lived there. 40 to 54 Church Street are almhouses. If you want to know a bit more about them, just read the plaque on the building’s front wall.

The church of the Holy Cross and St Mary dates from the 14th Century, though the nice simple tower is late 15th Century. I wasn’t able to enter the church this time due to the lockdown, but the nave is quite tall and elegant inside, and the church is known for its monuments.

One of Quainton’s stone paths takes you from the base of the church tower to a kissing gate at the edge of the churchyard. It leads into a field. 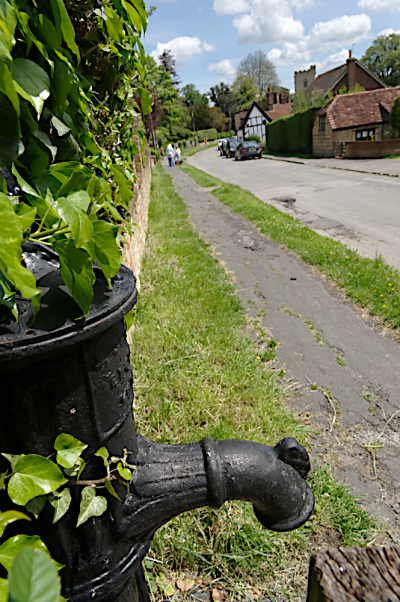 Church Street and the first pump.

In the field, bear right towards a wooden kissing gate. You’ll be walking down part of Matthew’s Way, a circular walk along public footpaths between North Marston and Quainton. It’s dedicated to young Matthew Lane, who died in 1996 at less than a year old.

This footpath has hedges on each side and I heard lots of wild birds here. When you come to a track that crosses your path, go through the kissing gate in front of you, into a triangular field. On your left beyond the hedge is a foursquare building; the old police station.

The end of Matthew’s Way brings you out on The Strand, next to the 17th and early 18th Century Pyghtles Cottage. From here, you can either walk past the Green to the top of Station road, or go into the fields to see the views, then return along Station Road. Going that way adds three quarters of a mile to your walk. 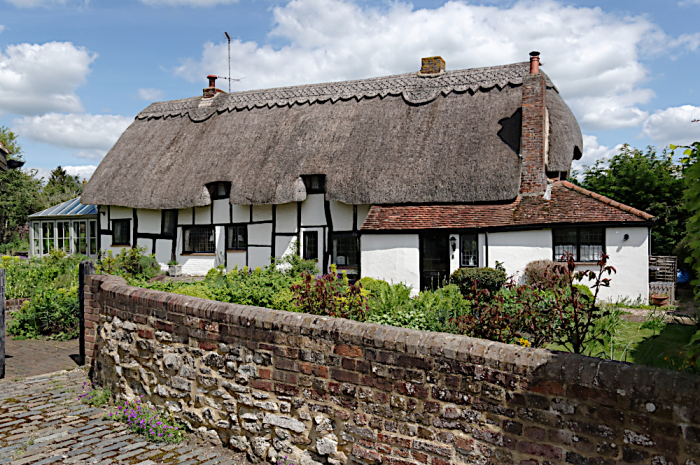 To reach the fields, take the footpath past the end of 6 The Strand. Keep going straight and the path will take you to another of Quainton’s many kissing gates. Beyond it is a long narrow field. Bear slightly left and head for the field gate at the far end.

About a quarter of the way through the field is a good place to see the views. Look back to see Quainton and the windmill, with the hill behind. Waddesdon Manor is on the wooded hill in front of you. In the distance on your left are the Chilterns.

I heard an impressive amount of bird song in this field. Red kites are common in this area, so keep an eye out for them too.

When you reach the field gate, turn right on to the track. It takes you back to Station road, where there’s a bench by the bus stop if you fancy a rest.

As you sit on the bench, the Buckinghamshire Railway Centre museum is half a mile down the road to your left, but to return to the start, go to your right. This part of Station road was known as Scraggs Hill, after Mr Scraggs who lived in a cottage on the hill.

There were once elm trees here and all over Quainton, all lost to Dutch elm disease. In the dip is a nice large white part thatched, part tiled house. Strangely it does not seem to be listed, so I know no more about it. 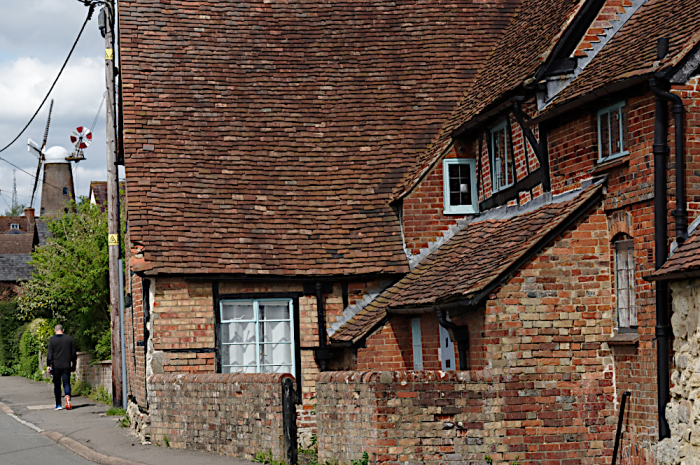 Before the railway came, Station Road was known as Hog Lane, so Station Road Farmhouse, built in the late 16th Century and much extended over the centuries, must have been known once by another name.

The farmhouse is half way back to the village from the dip. On the gable end that sticks out almost into the road is a brick at eye level marked G.W. 2010. It was put there a bit over a decade ago, when the building was under repair. In the farmyard behind was the fourth pump on the village system.

I’m told that with the pump was a well (possibly the reservoir) and a trough that was used on warm days to keep the milk churns cool.

The last point on the water system is harder to pin down, but I think it might have been Long Pond, a couple of fields further down from where you turned off the footpath and on to the farm track.

It’s dried up now, but it used to provide water for livestock from three different farms; their fields all met at this 36 feet wide, 360 feet long pond. 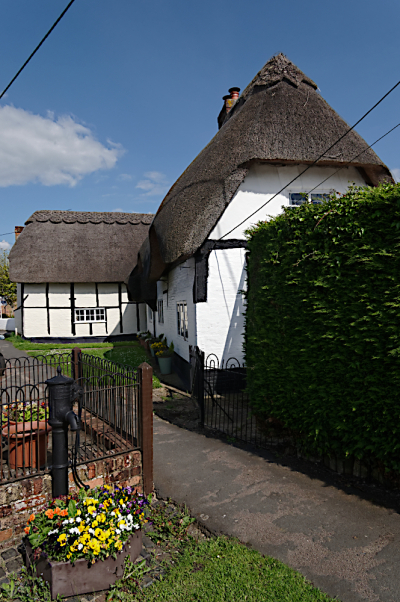 The third pump, Walnut Cottage, and in the background the old Sportsman pub.

At the top of Station Road, you’ll find the third village pump. It’s in Lower Street. Next to it is Walnut cottage, and the next cottage, with its gable end facing on to Lower Street, was once the Sportsman pub. They are both 17th Century.

Walk past the Sportsman, cross the road and head back towards the Green. On the bottom corner of the Green is a house, once a draper’s shop. It has a curved door on the corner with a big front display window either side. High above the door you can still read “London House”.

The George and Dragon pub (drinks, food, coffee, cakes) appears to be perhaps 18th Century, but if you look in the alley on the right hand side you’ll see that this is a later front; the pub has a timber frame.

There’s modernisation for you.

The way the village pump system works was explained to me a few years ago by my late father Victor Bradbury, who was born a Quainton man. My thanks for help with this walk go to my aunts Doris and Sheila, my dad’s sisters who still live in the village.

I've already published several other "Secrets of" guided walks, and more are being planned. Eventually there will be guided walks here from towns and villages all over the North Bucks area.