Nothing Left but the Tower 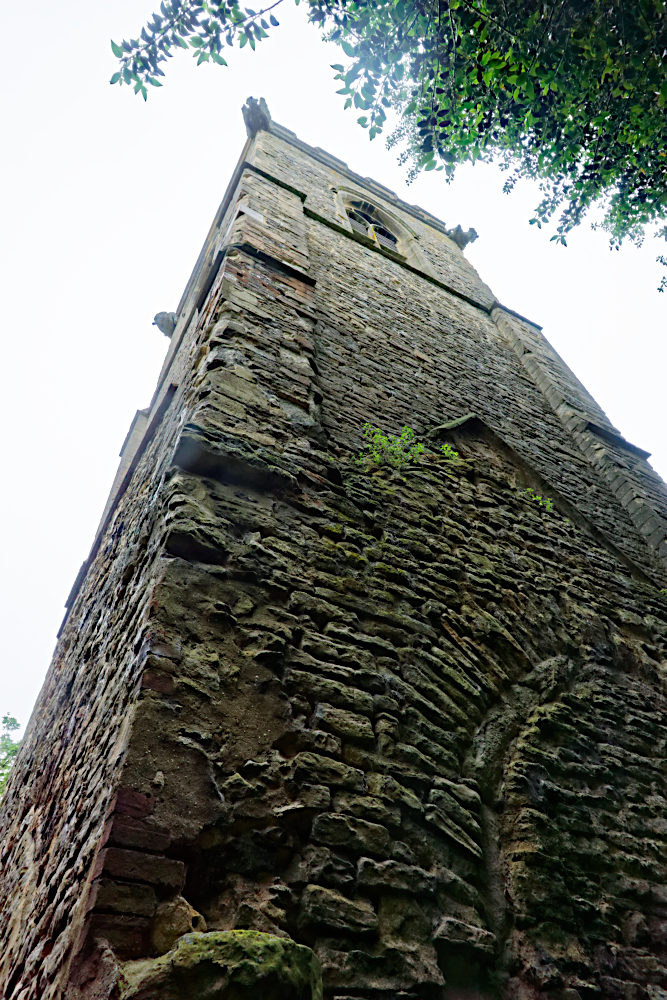 Hidden behind a car spares shop in Stony Stratford High Street, all that’s left of this church is the tower.

The rest of the 13th Century church burned in the town’s great fire of 1742. The remains were demolished. Only the tower survived in what’s now a disused graveyard.

The tower would be gone too, if it wasn’t for the local antiquarian Browne Willis. Four years after the fire, he spent nearly £30 of his own money on preserving the 15th Century tower.

He had the roof releaded, the walls repointed inside and out, and the two ground floor arches blocked up. One arch opened on to the nave, and you can see that arch in the photo. The other arch led into the South aisle.

Above the arch in the photo it’s still possible to see the line of the nave roof, and you can also see the gargoyles on the corners of the tower, at the top.

Inside the tower, the floors are gone (perhaps destroyed in the fire), and some of the spiral staircase remains.

The tower can be reached by an alley from the North end of the High Street, on the East side. The alley is right next to the MK Car Spares shop, and opposite what used to be the Cross Keys pub. You can’t get into the tower, but there’s always public access; the alley runs through the graveyard.

Aylesbury Vale in the Mist 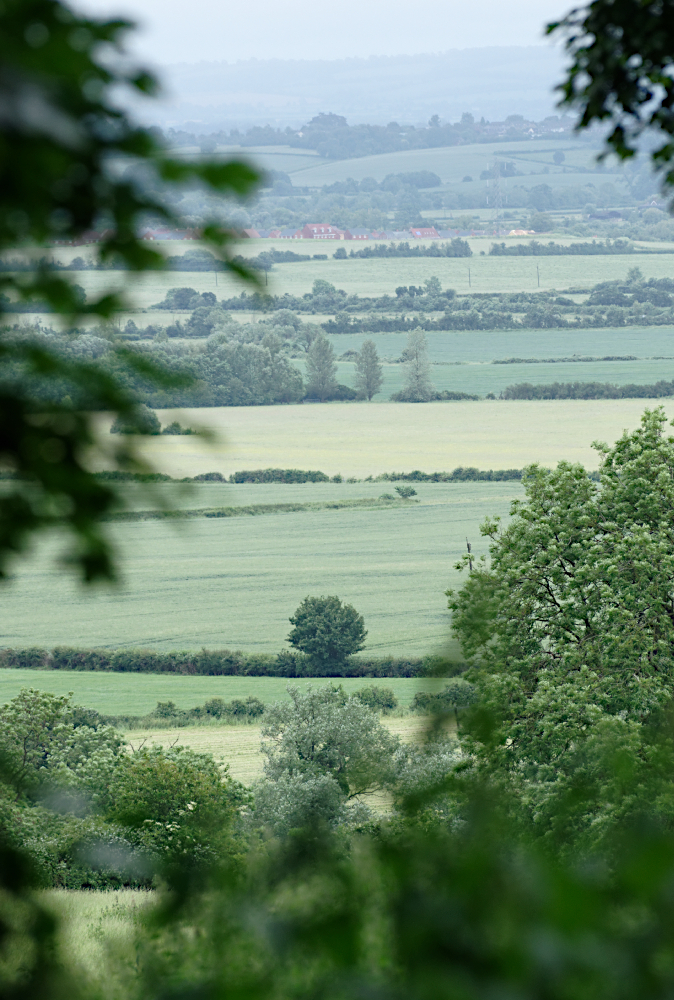 Some of the new estates at Aylesbury can be seen on the other side of the valley. The Chilterns are just visible in the background.

The wet weather last week foiled my plans to take photos for another Secrets Of… post, so I just accepted my fate and took photos of the wet weather instead.

I knew exactly where to go to get the sort of views I wanted; the back road from Whitchurch that runs West along the top of the ridge. 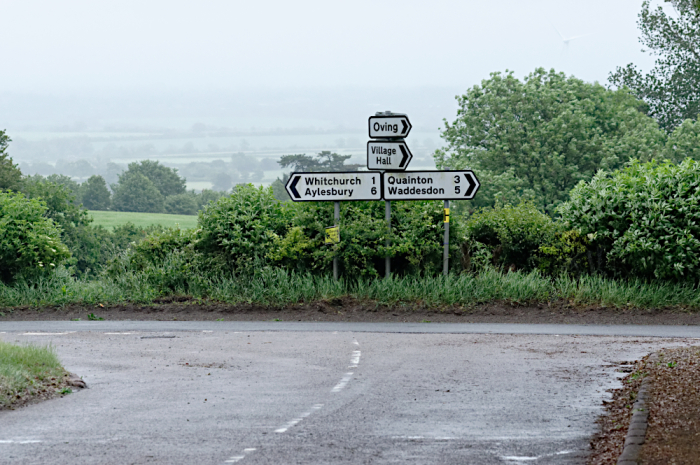 Even the trees on the other side of the field beyond the road sign are starting to disappear into the mist.

This hill is a watershed; streams on the North side feed into the Great Ouse and the water ends up in The Wash. To the South the streams feed the Thames; water from here will go through London. 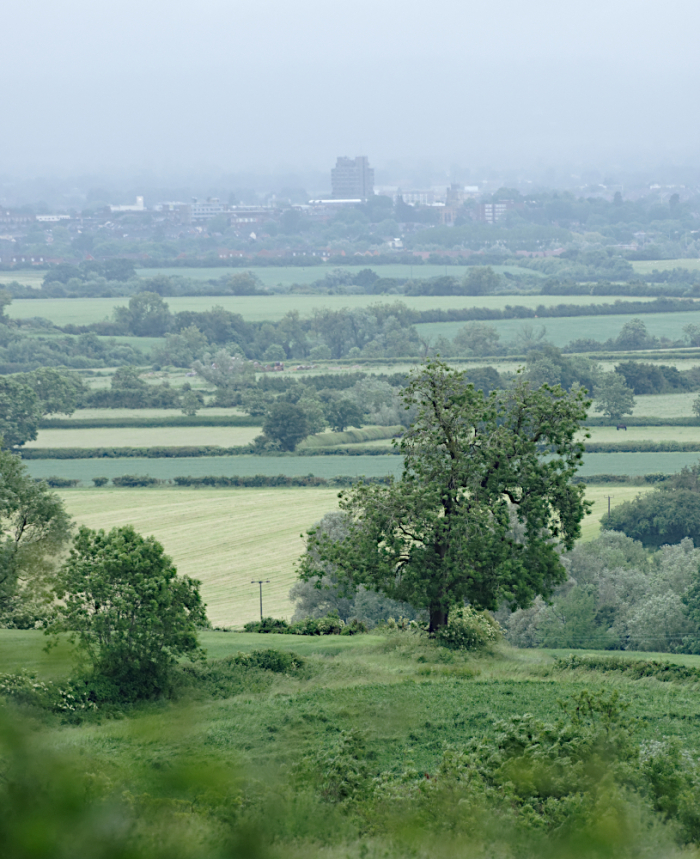 Aylesbury town centre is still visible through the mist, even though it’s five miles away. The solid block of the council offices is easy to recognise. 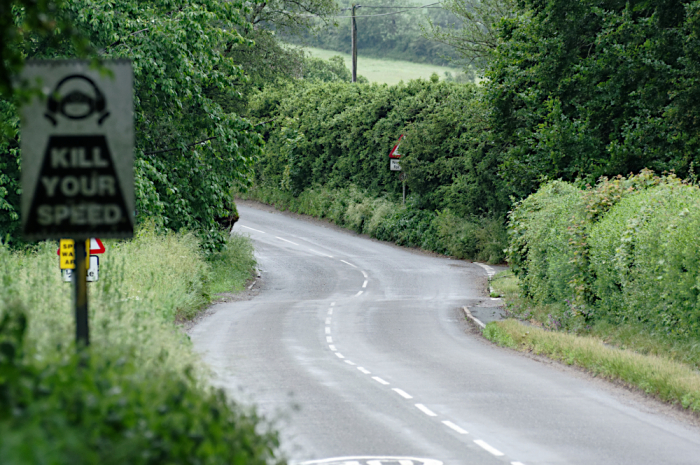 This narrow, twisty road lead to Pitchcott and Quainton. Part of this road (beyond the bend) runs along a Roman road. 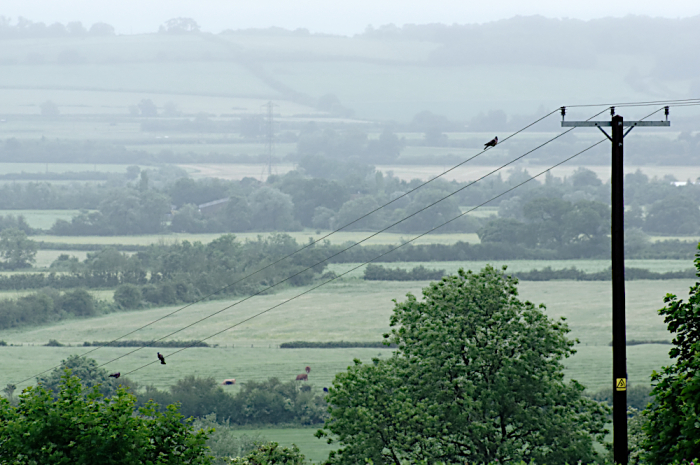 These 11,000 volt cables on wooden poles are common in Aylesbury Vale, taking power to farms and other rural locations. 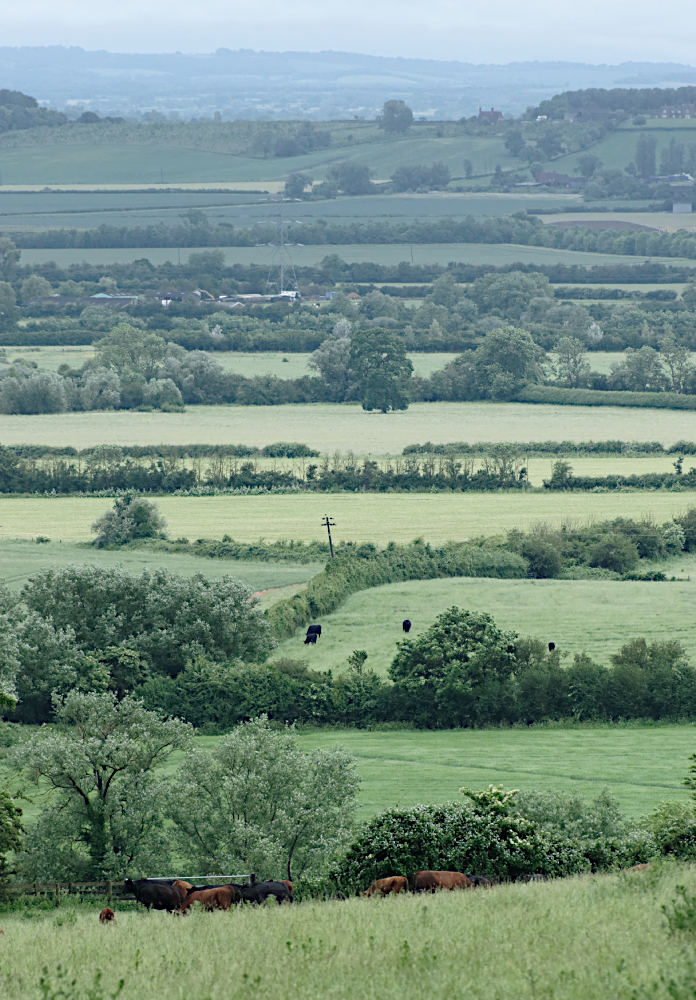 You might be able to make out a farm near the top of the picture in the hill top gap between the woods. That farm is near Waddesdon.

What’s On, and When? 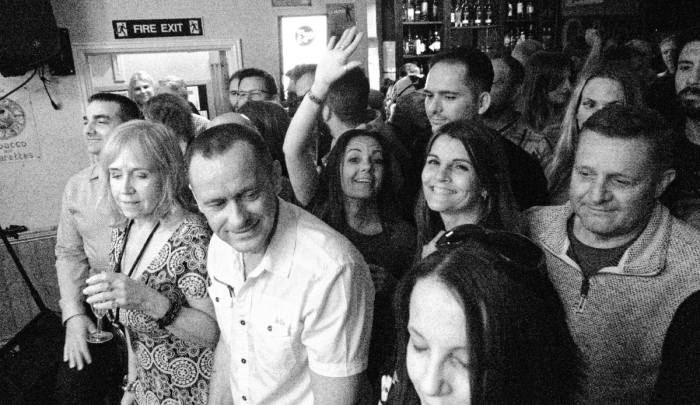 Stony Stratford's eight day Stony Live music festival and the Stony Classic vehicle show were all set to be held in the first full week of July, but the extended lockdown has meant both will now be held near the end of August.

Classic Stony will now be on Sunday 29th August from 9:30 am to 4 pm, with the various live music and cultural events of Stony Live now on between Saturday 28th August and Sunday 5th September.

As usual, Willen Hospice’s excellent used bookshop in the High Street will be open for the Classic Stony show. They say they “have a large collection of Classic car/cycle books & models”.

There may still be a few events still able to continue in the original 3rd-11th July slots; please support them. You can check which ones are still on by visiting the Stony Live website.

Regular readers will know that Stony Live and Classic Stony are favourite events for the North Bucks Wanderer.

Some events in North Bucks are completely cancelled. Folk on the Green isn’t going ahead, and neither is the Ludgershall Bike Night.

This photo above isn’t actually from Stony Live, though it is from one of the usual venues. It just seemed to be the right shot for today’s post. It was taken in 2017, when nobody knew what social distancing even meant. 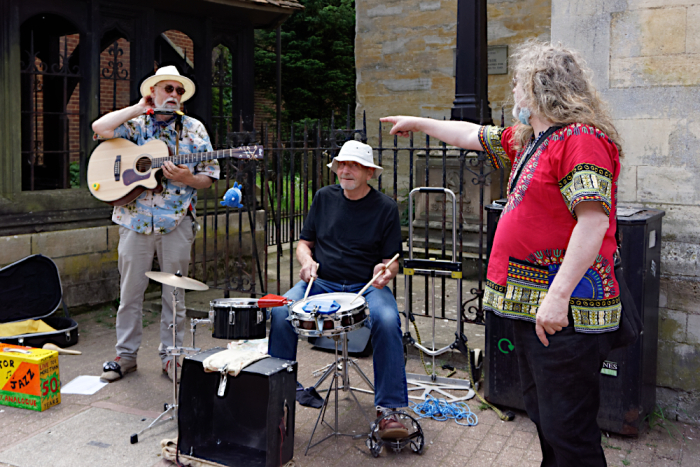 Stony Stratford is well known for its live music scene, though I haven’t seen a band playing there (or anywhere else) since before the lockdown began, all those months ago.

I miss it, so when I heard live music coming from round the corner in the High Street, I walked over to see what was going on. This is what I found; three real, live musicians; “Doctor Jazz”. It was great.

A Church in the Country 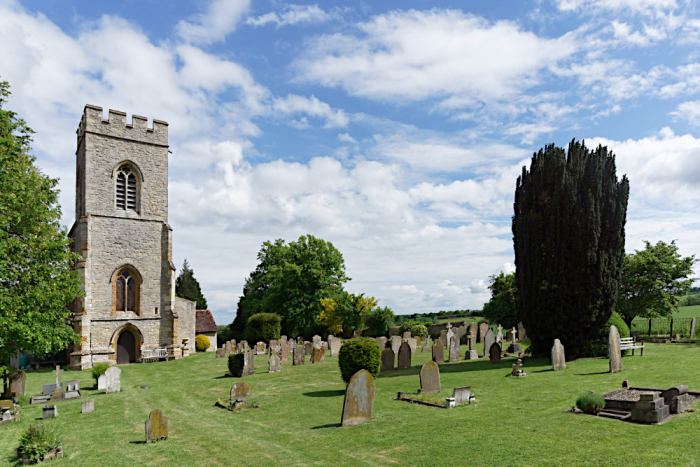 This is St. Peter’s church, at Stoke Goldington. It’s surrounded by fields and the only old buildings anywhere near it are those of Church Farm. The centre of Stoke Goldington is nearly half a mile away, so why is this church here and not in the village it serves?

It might be that the church was once in the village, but for some reason the village moved away.

Old foundations have been found near the church, and there are traces of an old manor house nearby, plus what seems to be a moat around the partly 16th Century Church Farmhouse, East of the church.

Moats are very much a Medieval thing and it’s quite usual for a Medieval manor house to be close to the church, both near or at the village centre. St Peter’s is a Medieval church, built by the Normans in the early 12th Century.

There are ancient tales of a fire that swept through Stoke Goldington, and that’s said to be the reason the village moved. It might also have moved as the climate changed and life turned out to be rather better down in the dip.

Whatever the reason, it was a pleasant place to visit on a warm June day. The tower is, like many, 15th Century. 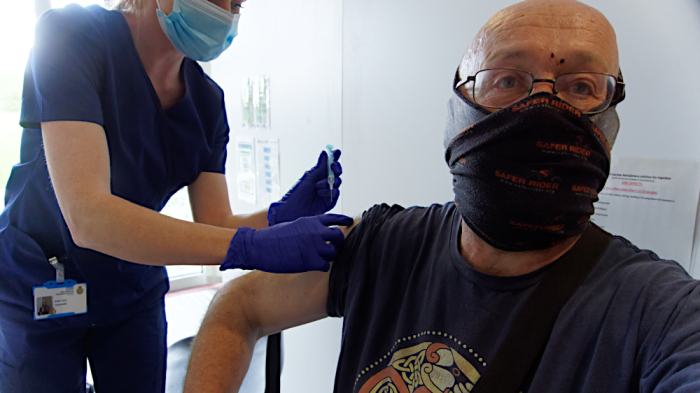 On Monday I cycled the short distance from my house to the Open University campus, for my second Covid jab, another dose of the AstraZeneca vaccine.

My first dose had been at Saxon Court in Central Milton Keynes, where I was not allowed to take photos. This time at the OU’s Michael Young building, the paramedic who injected me and the two guides out on the road were happy to help.

Continue reading "Getting the Needle" »