Norman is as Norman Does 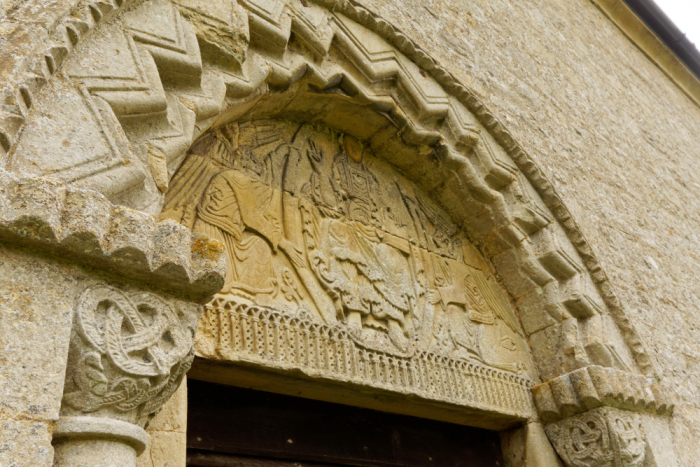 As soon as I saw this arch, I realised I was looking at a Norman church. The giveaway is the three rows of concentric zigzags or chevrons around the edge.

But really, I thought it might be Norman as I rode past it on my motorcycle, just yesterday. The church’s solid, compact and simple appearance made me turn the bike round and park up for a better look. This is St Giles’s church, in Water Stratford.

That semi-circular panel between the arch and the door lintel is called a tympanum, and the carving is of Christ in Majesty. This doorway, and the nave it’s in are believed to have been built in around 1135.

There’s another tympanum on the other side of the church, above a door in the chancel.

The lintel is carved with a miniature blind arcade, and if you want to see a full sized blind arcade you can find one on Stewkley’s Norman church.

Those knotted designs on the tops of the door pillars (the capitals) are carved with the cable motif. Those horizontal slabs between the ends of the arch and the capitals are the imposts, though I don’t know what the motif carved into them is called.

The church is very simple. There’s the nave, a tower that used to be much taller, and a chancel. The whole building is not much more than about 75 feet long. Of course, I couldn’t go in and didn’t try. I look forward to the time when I can go into a church and look around inside again; shouldn’t be too long now.

Water Stratford used to be called West Stratford until around 1436, and “Stratford” means there was a ford for a Roman road near this spot. The Roman road ran between Bicester and Towcester, but another one branched off it to Stony Stratford, from just North of the village.

It’s amazing what you find if you have your eyes open.