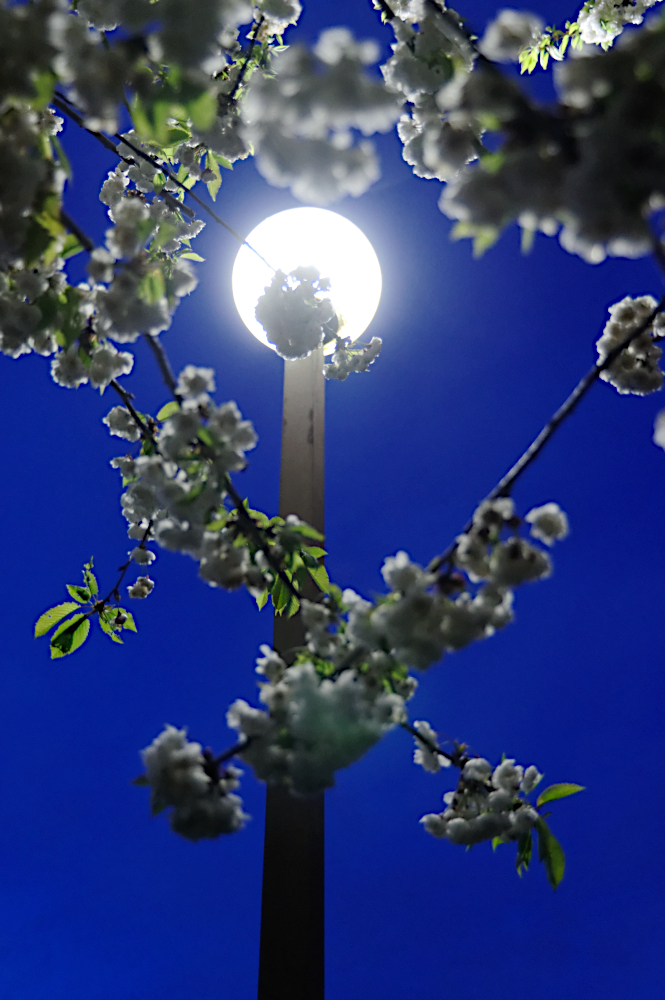 This is one of the original street lights designed for Milton Keynes. Part of a complete system of street furniture for the new town, lights like these began to be installed in the new estates around 1975. This one is in Woughton on the Green.

This is the type used on smaller estate roads, so it has a square brown column with a globular lantern on top. There were several designs; all pretty similar on the outside, but with various different internals.

Main estate roads had globe lights too, but they were mounted on an arm that stuck out sideways from the square brown column.

To produce a cohesively designed town, in 1978 the Milton Keynes Development Corporation produced a brochure with diagrams and plans for lighting, signs, bus shelters and seating. Everything was designed to be durable with easy maintenance.

One design example is MKDC’s park bench. All steel and painted black, it has a single tube at each end, bent to form the legs and the end of the seat and backrest. A single sheet of perforated metal stretches between the tubes to form the rest of the bench. The thousands of round holes means the seat will not hold rainwater.

As you travel around Milton Keynes, keep an eye out for the street furniture that was part of the original new town. There’s still quite a lot of it. 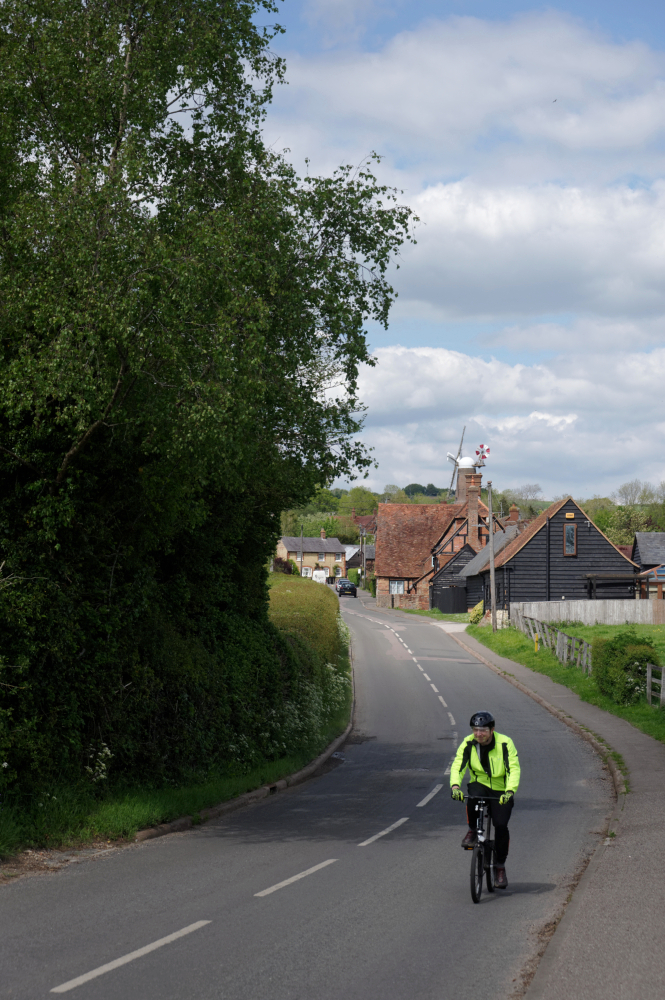 Folks, it's been quite a week and I've had to deal with family stuff, so there's no Thursday post this week. You might have guessed this, as it's now Sunday morning.

So this week's Thursday post is being held over until next week, and it will be one of the "Secrets of" series. The photo above is a clue to where it will be; can you work out where this is?

The Flag of Tibet Tibetans are not allowed to raise their flag in their own country, Tibet being occupied by Communist China.

But once a year the flag is flown in Milton Keynes, and this year, as before, it was raised in the garden of the Buddhist temple at North Willen lake.

Usually 70-100 people attend the event but because of Covid this wasn’t possible. Only six people could be in the temple, and only six runners could take a flag each around the lake. This man was one of them.

The Tibetan flag is full of symbolism. The six red bands on a dark blue sky are for the six original tribes of Tibet, and a pair of fearless snow lions represent Tibet’s unified spiritual and secular life. The lions stand on a great snowy mountain, the great nation of Tibet. Between them they hold two jewels; symbols of reverence to Buddhist principals.

At the peak of the mountain is the sun, shining over all. The yellow border represents the spreading teachings of the Buddha. The flag was designed by the previous Dalai Llama, the 13th, in 1916.

The ceremony took place on Sunday 16th May, the day before the social distancing rules were eased. I don’t know yet how the relaxed rules have now changed for religious events. 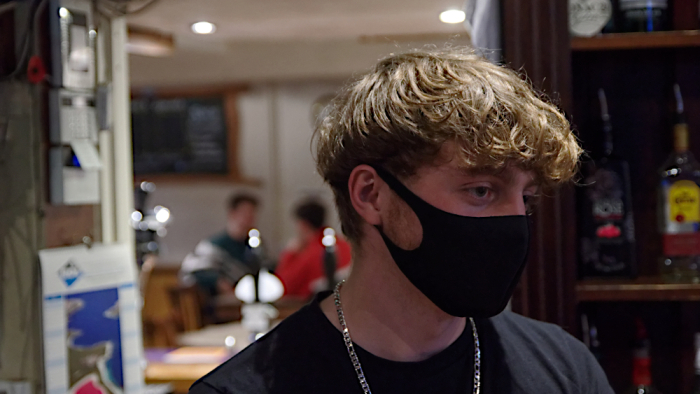 I went to my regular pub on Monday, the Fox and Hounds in Stony Stratford. I haven’t been in this pub for over a year. It’s been closed; I think you know why.

Not sure what to expect, I turned up, ordered a pint and the barman brought it to my table, along with the card payment machine.

I didn’t have to wear a mask while drinking, but the barman and landlord both wore masks.

It’s been so long since I’ve been in the Fox that I couldn’t remember what I used to drink, but the off duty barmaid sitting at a table in one of these photos recognised me instantly, remembered what I drank (pint of Tribute) and which night I usually came in (Friday).

I'm doing family stuff this week, so the usual Thursday post is going to be a couple of days late.

Gotta look after the family, folks.

It’s Grand on the Canal 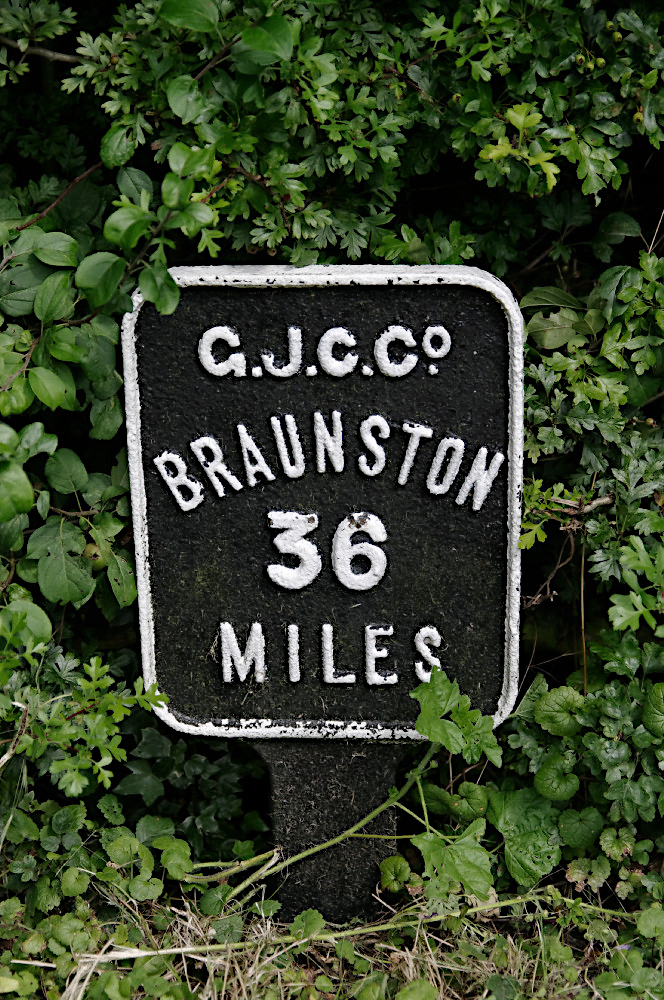 This cast iron sign is on the towpath of the Grand Union canal, at Woughton on the Green, Milton Keynes. But what does G. J. C. Co. stand for?

This was the Grand Junction Canal until 1929, But when the railways took away much of the canal trade in goods transport, It was taken over and became part of the Grand Union canal, in a merger of several other canal companies.

This stretch was built at the end of the 18th Century. It ran from Braunston in Northants, down to the Thames at Brentford in West London.

Canals follow the hill contours, so you might think that canals take a very indirect route. But it’s not much further to Braunston from here than the same journey by road, at 36 miles instead of 32. As the crow flies, it’s under 28 to the junction at Braunston.

Boaters can get a good idea of how long a canal journey will take. To work it out they assume an average speed of three miles an hour, and add to that ten minutes for every lock.

At three miles an hour those 36 miles to Braunston will take you twelve hours. The 21 locks you’ll pass through on the way will take you 210 minutes, or three and a half hours.

Altogether you’ll be looking at a total of sixteen and a half hours; a two day journey if you don’t stop.

By the modern road you could easily get there in an hour, but it would have taken a lot longer by road when the canal was first built, especially in the winter.

I wonder how long it would take to do the trip now, by bicycle along the towpath.