Home Subscribe Affiliates Commenting... Contact About
Fifty Years Since We Stopped Wing Airport
Norman is as Norman Does 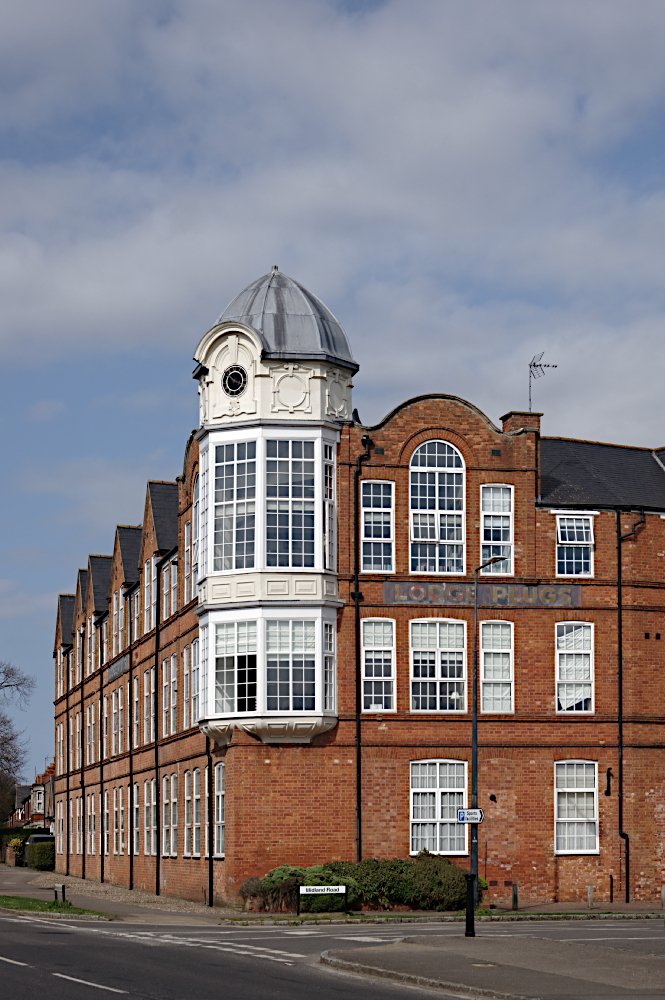 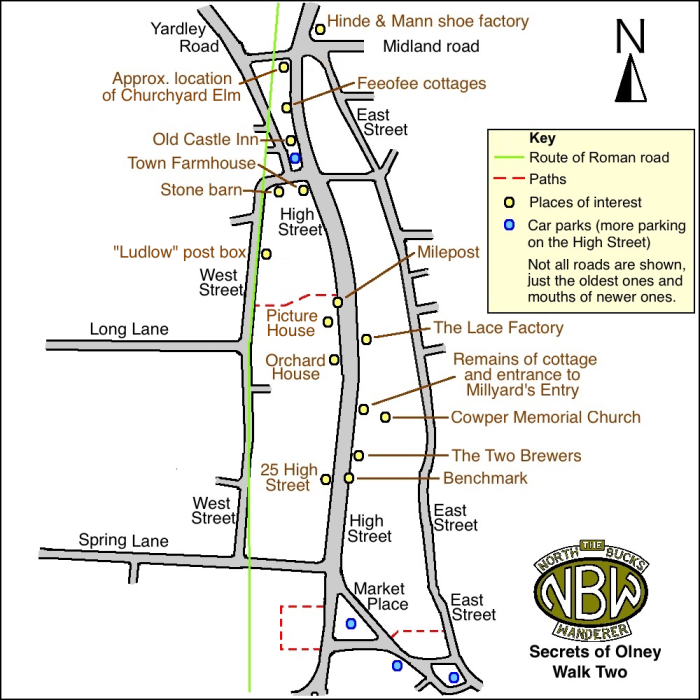 From the Market Place, go over the Pelican crossing and head North, on the West side of the High Street.

See how the plots the buildings are on are quite regular in size? This is because they were laid out, most likely in the early 13th Century, as Medieval burgage plots. It was an early example of town planning.

These plots were a form of rental property, the owner being a lord or monarch and typically are long and narrow. West Street and East Street were the rear access lanes. 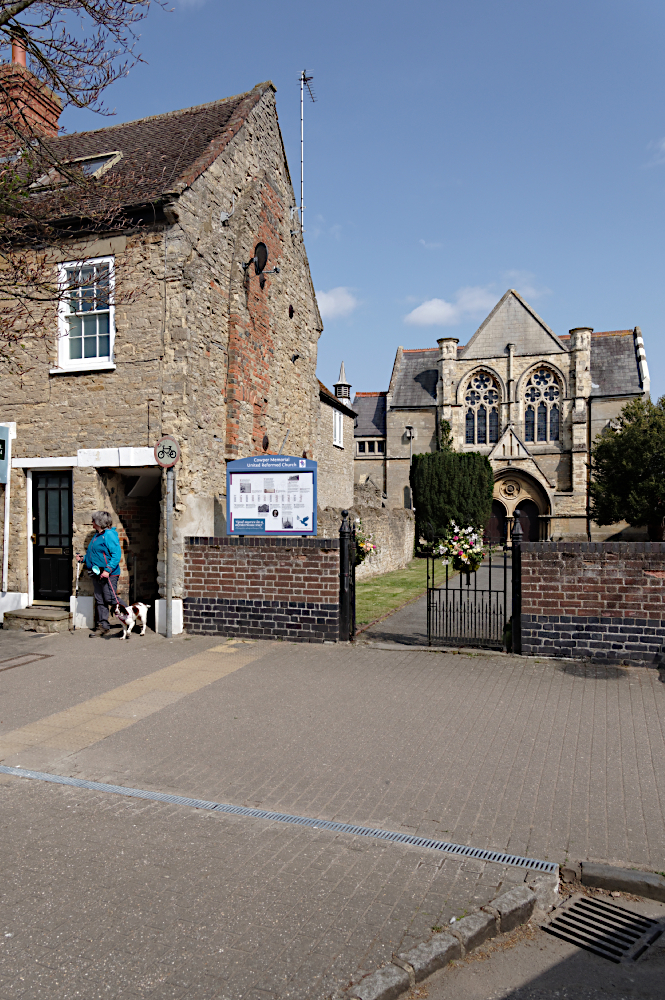 Millyard's Entry and the remains of a cottage.

The High Street is very wide, and that’s good; during your walk you can get a better look at the buildings on the other side of the street. It’s wide for three reasons.

First, streams ran North from Spring lane and South from Yardley Road along the West side of the High Street They joined somewhere just to the North of The Two Brewers pub, and flowed towards the river. Willow trees grew on the stream banks along the High Street.

Second, on the East side was a track for wheeled traffic. Third, between the two ran a wide raised causeway for pedestrians, banked high enough to remain dry when the stream flooded. I suspect the streams still flow, out of sight in stormwater drains. 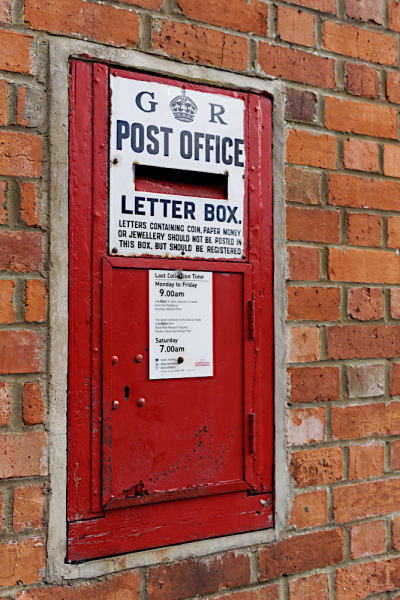 25 High Street has an engraved stone high up that says “This house was rebuilt by the Feeofees for the towne of Olney 1694” The Feeofees were a charitable organisation who used the income from properties in the town like this one for charitable works. I think the cast iron sign next to the stone is a Fire insurance plaque.

Further along the High Street, Orchard House has an ornate doorway and front railings with orchard trees. It was converted from two 18th Century houses (Nos. 67 and 69 High Street) in 1904 for Joseph William Mann, who with his partner William Hinde owned the shoe factory we shall see later.

In the back garden and not visible from the highway is a small brick built generator house; in 1904 Orchard House was the first house in Olney to have electricity.

A little further along is a house set back from the road behind a wall, called The Picture House. From 1919 to 1952 this was Olney’s cinema and showed films like Gone With the Wind and the 1938 version of The Lady Vanishes.

Keep going along the High Street until you see a ‘Hovis’ sign sticking out over the front of a shop; this building of course was once a bakery. I don’t know when that ended but it was inoperation during the 1930s and 40s.

Just beyond the shop is a mile post. It’s made of steel and is one of the “Bucks Pressing” type, which means it’s from the late 19th or early 20th Century.

Just beyond is an archway which once led to Cobbs Garden, one of several courts of tenement buildings that often housed large families in cramped conditions. The tenements were demolished in the 1960s.

Walk through the archway, and  when you reach West Street turn right. 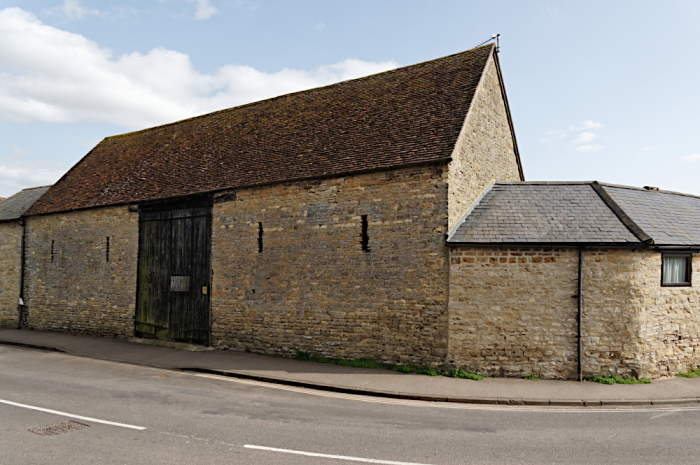 The stone barn in West Street.

About half way to the corner, by the entrance to the Olney Centre, is a “Ludlow” post box.  It’s named after the company that made this type and unusual because it’s mostly made of wood, instead of the usual cast iron. It was installed between 1910 and 1936,  during the reign of George V.

As you approach the corner you’ll find yourself behind what was once a farmyard. Around the corner is a big 18th Century barn, complete with a full height cart entrance and slit openings in the wall on each side. As you approach the main road, the gable end of the large and impressive Town Farmhouse is on your right.

Cross the end of West Street and walk past the right hand side of the Maya restaurant. This building used to be the Castle Inn, built in the early 18th Century. Behind this spot lay the ancient village of Olney.

The row of six cottages on your left as you walk along the main road were part of the Feeofee Estate, and when they were rebuilt in 1881, human remains were found that indicated a Christian graveyard.

To confirm this, a bit further on and opposite the Queen Hotel there used to be an ancient tree known as The Churchyard Elm, or Church Elm. It died in 1935, but its decayed ten foot high stump  was still there in the 1950s.

Once you get to the bus stop you will be able to see a large building with “Lodge Plugs” written in big letters, across the junction. This fine building was once the Hinde and Mann shoe factory, and opened in 1894.

They built shoes there until 1932, then in 1940 it became a shadow factory making spark plugs for Spitfires and other RAF planes. It’s now divided up into flats.

Cross over the main road at the Pelican crossing and head back down the High Street. 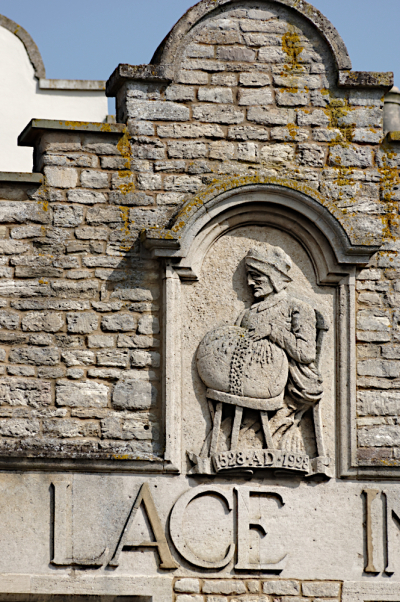 A little further along is The Lace Factory. Set back from the road, it has “BUCKS LACE INDUSTRIES” carved into the front, with a carving of a lace worker above. Built in 1928, lace was never made there, but from here, lace collected from the local area was packed up and sent all over the world.

A little further along, also set back from the road, is the 1880 United Reform Church, that replaced an earlier chapel built in 1762. A cottage that blocked the view of the church was demolished when the new church was built. Remains of the cottage are visible on the wall of the house to the left.

The passage underneath the end of that house leads to the sports grounds and the river; it’s called Millward’s Entry. It’s a nice quaint alley to walk up but there’s not much of historical value at the other end.

Somewhere between here and The Two Brewers pub was High Arch, where the two High Street streams joined and ran East towards the river. Let’s walk down to the pub.

The 18th Century Two Brewers has a carriage arch, the main route into the High Street for the fire station that lay behind the pub in East Street.

In October 1940 a German bomb landed on the far side of the river. the blast from it was so strong it travelled up the pub’s back yard, through the carriage arch and across the road to the shop, where it blew out both plate glass windows.

A little further on, just past some tall gates set in stone pillars, is an Ordnance Survey benchmark. It’s set low in a house wall, looking a bit green and corroded. It and thousands others were installed as a fixed point to take measurements from, for map making. 1796 is not the year it was first used, but its serial number; it was installed in 1915 or early 1916.

This is the end of the second of the Secrets of Olney walks. Return to the Market Place for a cup of coffee or tea; you’ve earned it. There are plenty of places to buy food and drink in Olney.

I've already published several other "Secrets of" guided walks, and more are being planned. Eventually there will be guided walks here from towns and villages all over the North Bucks area. 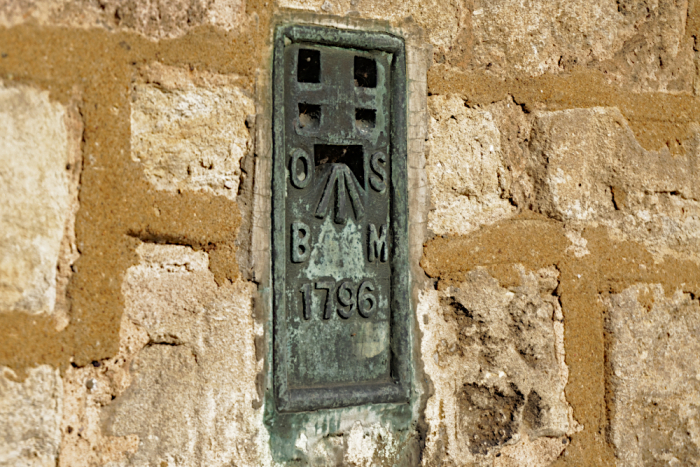