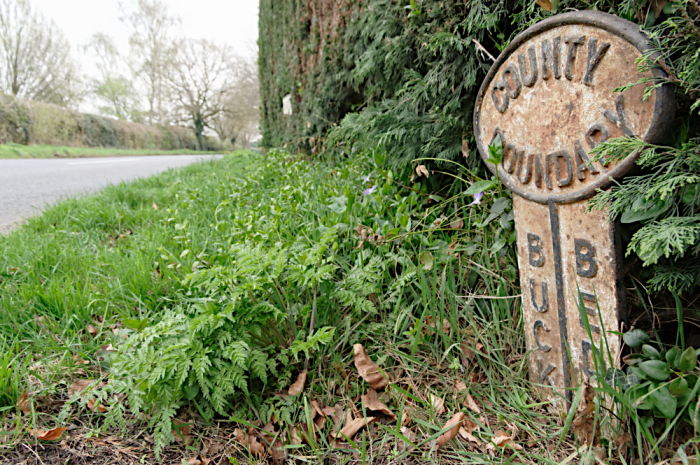 I’m just outside Buckinghamshire here, but only just. I’m close enough to reach out and lay my hand on the edge of the county, and I know this because this cast iron sign tells me so.

It’s a county boundary post, probably erected in the 1930s. South of this spot, the border between North Bucks and Bedfordshire zigzags away along hedgerows until it meets a stream.

It follows the course of the stream for a while, then turns off along the line of what used to be the edge of a field but is now the back fence of several houses.

When the boundary hits Station road in Woburn Sands, it turns ninety degrees and runs right across the front face of the Weathercock Inn.

You can see here that the boundary runs right across the bottom of the photo. What you can’t see is that at the base of the post, the border also turns sharp right and goes past the camera and my right elbow; I’m in a corner of Bedfordshire.

The boundary crosses the junction and goes along the edge of the road. This means that the houses here (this is Lower End) are in Bucks, and the road is in Beds.

From Lower End, the boundary follows the Cranfield Road and crosses the A421 and the M1. The A421 is being dualed now and last time I was there, a new bridge was being built to take the Cranfield Road over the new dual carriageway.

There are 18 boundary markers still known to exist around North Bucks, and most of them are in this ‘lollipop’ style.

I think I’ll see if I can find a few more; it’ll be somewhere to go on the motorcycle now that’s allowed again. A journey with a destination, no matter how insignificant, is always better for you than just going out and travelling randomly.

By the way, there's a few more Tales From the Edge in the sidebar.