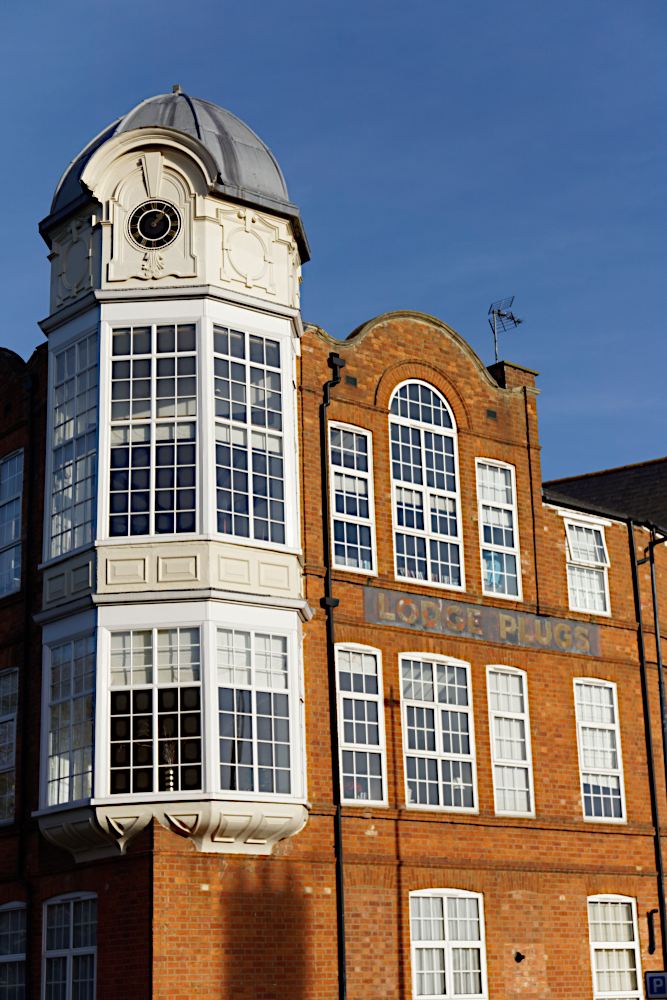 This fine building is now divided into flats, but it was built as a shoe factory over 120 years ago. In the 1940s it played an important part in the war effort, but not by making shoes!

Hinde & Mann’s two storey shoe factory on Wellingborough Road in Olney opened in 1894, and the firm did so well that later they extended the building upwards or outwards three times.

By about 1909 their high quality boots and shoes could be bought in every large town or city in the UK, and as far away as New Zealand. They also made boots for the army in the first World War.

When the recession hit in the 1920s and 30s, the company struggled when cheaper and lower quality shoes came on to the market, and the factory closed in 1932. But the firm carried on in other buildings in the town until the 1970s.

In 1940 Lodge Plugs, who made spark plugs for all sorts of military engines in their Rugby factory, were looking for somewhere they could use as a shadow factory.

This factory had to be away from the big towns and cities to avoid the bombing, and together with their main site at Rugby, it would allow Lodge to increase their output; sorely needed because of the war. Olney was ideal, and the Government requisitioned the disused shoe factory for the production of essential war material in August 1940.

Lodge were already making plugs for the RAF, but they had technical problems to overcome; aero-engine development advances quickly under wartime conditions, and the existing types of spark plugs were failing, lasting no more than a few hours.

So Lodge developed spark plug electrodes made of platinum instead of nickel, and by 1942, even in the highly tuned Merlin engines in Spitfires and Hurricanes they would last more than 300 hours.

When America entered the war, their Liberators and Flying Fortress bombers suffered from the same problems with spark plugs the RAF had seen. Lodge designed a special plug for the American engines, and it became the rule to fit this design of plugs to American bombers as soon as they reached Britain.

Three quarters of Lodge’s output went to the RAF and the American Army Air Force, and after the war the company bought the factory and made spark plugs there up to the 1950s. Around 1970 Pergamon Press used the building to store and distribute their educational books and magazines, and in the late 1990s the building was sold to private developers.

Lodge Plugs eventually became Lodge Ignition, and is now called Vibro-Meter UK; they make ignition systems for industry. I suspect that the Lodge Plugs signs didn't go up until after the war to keep the factory a secret; perhaps somebody can tell me if I’m right.