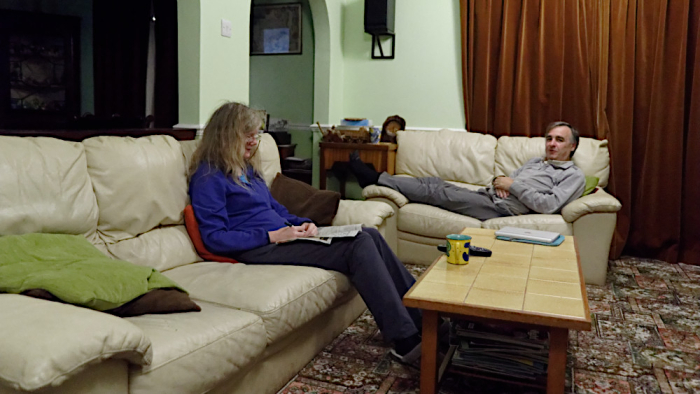 In the warmer months when we were allowed to meet in each other’s back gardens, my brother and his family would visit me once a week. You can see the project photo here. But now the evenings are darker and colder that’s not so practical or pleasant.

The Autumn weather is probably one reason the rules were changed, so that we could meet up in each other’s homes. Here, the two boys are back at university so there’s just the three of us, but now I go to my brother’s house; my place isn’t quite right for remaining socially distanced. Before Covid-19, we would sit close together on these two settees.

There’s no sign of the lockdown going away; in fact it’s been tightened in some areas, though here in Milton Keynes and Buckinghamshire we are still at the lowest level of restrictions. Let’s hope it stays that way.

For a long time, for months and months, I did not go into anybody else’s home. I was slow to change, and it was some time after we were officially permitted to visit other people inside their homes that I started doing so.

So far I’ve been into three other people’s houses. I’m due to visit a couple more this week, but that will probably be it, for now.

I’ve been to the pub a couple of times, The Barley Mow at Cosgrove. Though I got some good shots for the project, the pub is in Northamptonshire so I can’t show you them here.

But how do I feel about the lockdown? 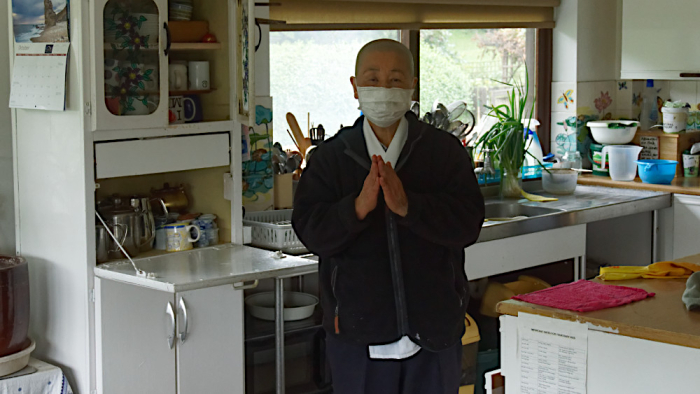 At the Buddhist temple in Milton Keynes, Sister Maruta wears a face mask in the kitchen. I photographed the temple’s very much changed and reduced Pagoda ceremony and Hiroshima Day ceremony for the project. The temple is not open to casual visitors during lockdown.

Well, I’ve spoken to two people who have had Covid-19. Both spent five or six weeks in hospital, both suffered from hallucinations and delirium, and both took weeks to get back to their previous level of fitness after they left hospital.

I had a similar experience in 2011, but that was with septiceamea. It’s harder to catch than Covid-19, but half of all those who get it do not survive. I was pretty lucky that time; I nearly lost an eye, but that was nine years ago and now I’m 61; not so able to fight off serious illness as I used to be.

So you’ll understand that I don’t want to repeat the experience and that I take social distancing seriously.

So how does this square with going out photographing people out during lockdown? Firstly, going out with the camera was my allowed bit of exercise.

And before I even took one photo for this project I did some calculations to work out how far away I could be from my subject.

The plan was to have two metres between the subject and the edge of the frame, on each side.

I also wanted to take my photos from a low angle and I’d go down on one knee.

And with my face closer to the ground I wanted to be far more than two metres from my subject, as the virus drifts downwards over distance.

With the lens I chose to use, I found I would be about four and a half metres away from my subject if it was just one officially sanctioned exerciser, or around five metres away if there were two of them from the same household, stood together.

Fair enough. I would be happy with that distance, and so would my subjects; I didn’t want to make them nervous by being too close, and the chances of infection either way would be very, very slight. 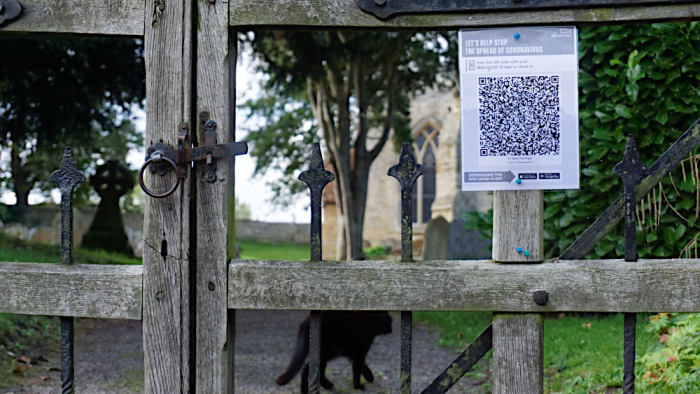 This is Clifton Reynes church. QR codes at venues and other places are now common. The idea is that you download an app onto your phone which means you can be automatically contacted, if you have been present at the same time as somebody who has been found to have the virus.

Photographing the QR code, a different one at every location, allows your phone to log where you’ve been, and phone detect each other at the location via Bluetooth. This cat didn’t seem to care and just waltzed right in. But as was soon established at the start of the pandemic, cats and other animals can not catch Covid-19. 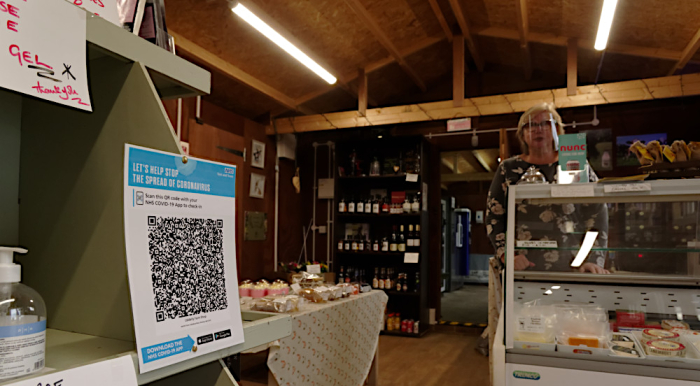 At the Udderly farm shop near Winslow the QR code is just inside the shop, with a bottle of antiseptic gel ready for customers to use. The shop has recently introduced a one way system for customers; we now leave by the room at the back where we buy the milk. I’ve been buying eggs and milk from here since the start of the lockdown, although it’s not the closest shop.

I eat a lot of eggs, and when the panic buying was going on eggs were very difficult to get hold of. Rather than go round two or three supermarkets every week trying to find enough eggs, I decided to drive a few more miles to the Udderly shop. That meant I would get all the eggs I needed, with the minimum of contact with other people. I buy the milk while I’m there because I like it. 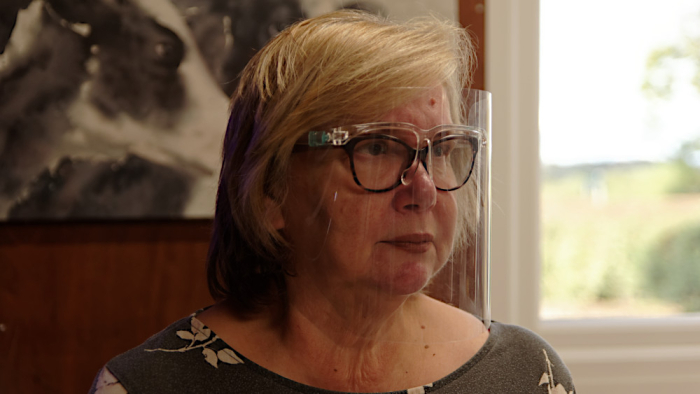 This is Jan, one of the owners of the North Hill farm, home of the Udderly farm shop. She wears this face shield when working in the shop.