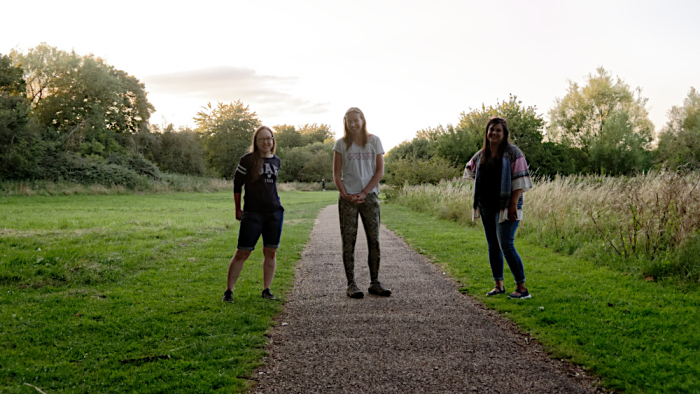 Three girls out for a walk. Permissable now if you live in different households. 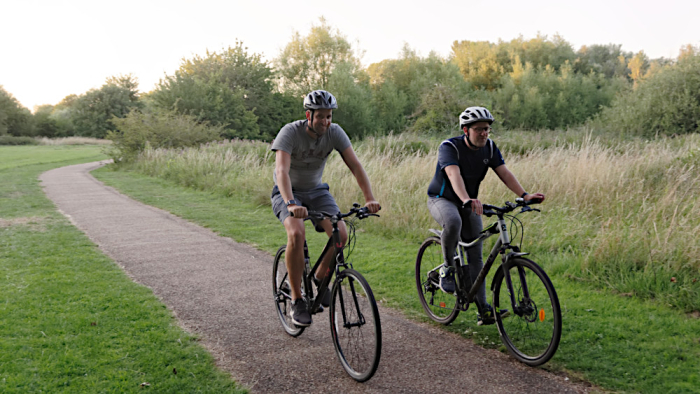 Two cyclists. Also permissible if you don’t share a home.

Right at the beginning of this project, the lockdown was very strict. It seems a world away now, but we were allowed to go out once a day for exercise, but only with people we lived with. Everyone else? Two metres away, please; at least.

I photographed one pair out on their permitted daily walk then who from what they said did not share the same house, and they made sure to be a good two metres apart when I took their photo.

When they approached me they were chatting together and were maybe not quite as far apart as they should have been. It was really a slight bending of the rules. It’s been common all along, I’m afraid.

The rules have changed, and now it’s okay to meet if you are from other households, though of course the minimum distance still applies.

We have now been under lockdown for six and a half months. But what’s happening with the figures? At its peak in mid April, the moving, seven day average number of fatalities peaked at 943 per day; the lockdown had started three weeks earlier.

After this peak, the restrictions began to take effect. In mid August, deaths were down to a seven day average of just 7 per day, but now they have risen again to 53.

All the figures above are from the Worldometers site, and we can see from these figures that fatalities are increasing again, perhaps mostly due to those areas where the lockdown has now been applied more strictly.

But as you know in most places restrictions have lifted and it is pleasant to meet friends in the pub; I hadn’t realised how much I missed it.

I’m going to a pub next week, but I have to sign in to their track and trace system, wear a mask until I am seated, and remain seated at the table apart from calls of nature. It will be table service only.

At first I thought we would be under lockdown until mid July but there’s no real sign of an end date. It’s going to be a Christmas with Covid; let’s hope it is a happy one.

The two photos above were taken in early September, and I omitted to ask, but I think the people in these two photos did not share a house; the captions reflect this assumption.

The photos below were taken yesterday, and if there were several people in one photo, I did find out whether they shared one home or not. 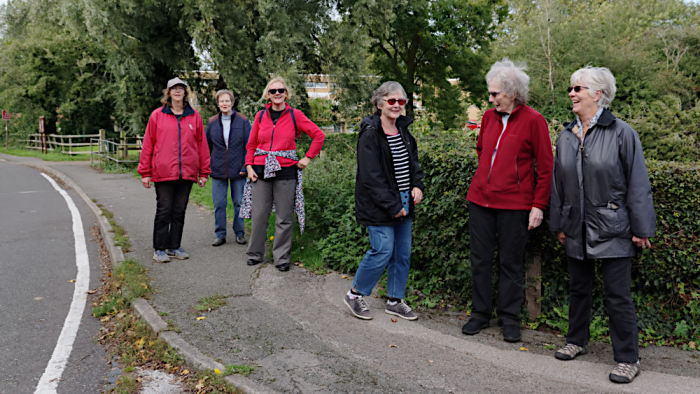 These are the Wednesday Walkers. A couple of these ladies are from Woughton Park and have appeared in the project before. Note that there are six of them, the maximum permitted. 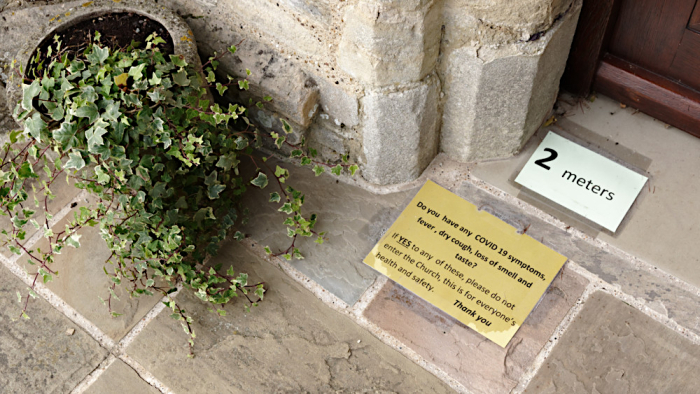 Woughton on the Green church. Through a window in the locked porch door I saw similar signs, just in front of the door into the church. More “2 meters” signs were set alongside the churchyard path. 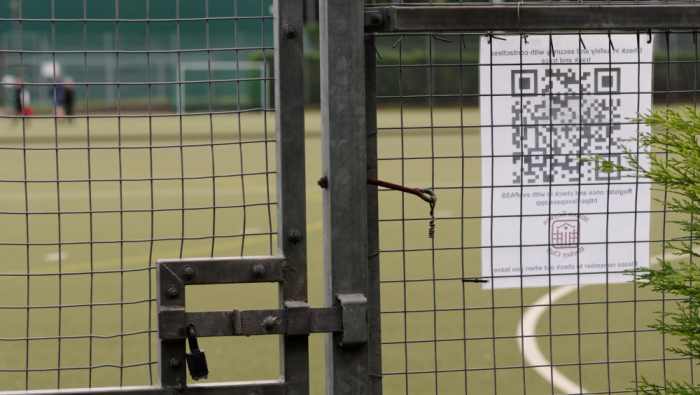 At the all weather pitch in Woughton on the Green, the Milton Keynes Hockey Club have put up this track and trace notice with a QR code. 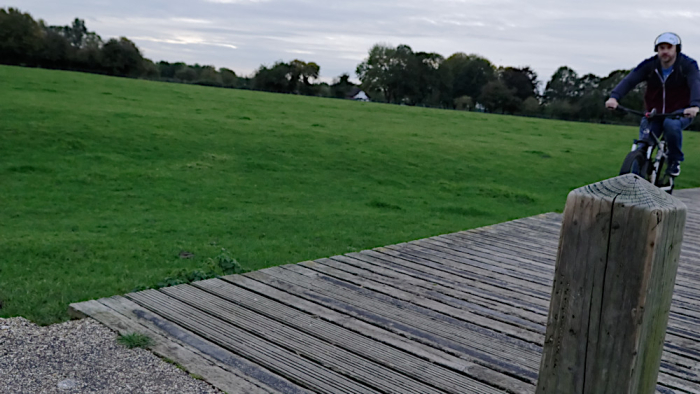 In the Ouzel Valley Park, I stepped to one side of the path to allow this cyclist to cross the bridge first. It isn’t wide enough to keep two metres apart. 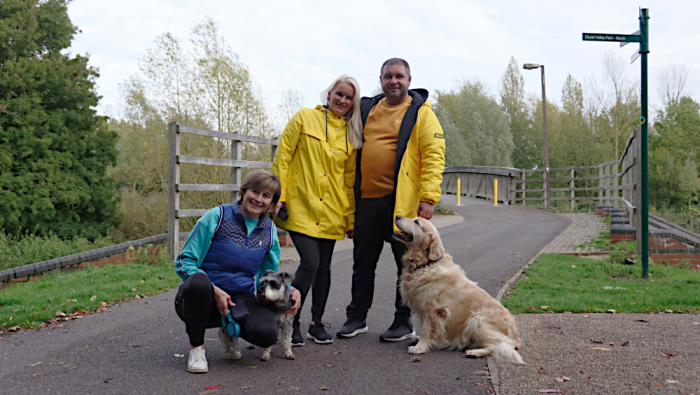 These three dog walkers from two different households were out yesterday. The man said, “We don’t believe in Corona. We think it’s more political”. 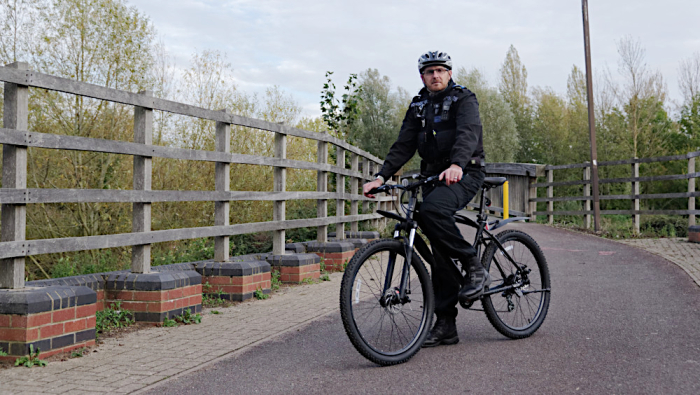 This PCSO told me that his job is now pretty much as it was before lockdown, though he has to wear a mask in confined areas. PCSOs were all wearing gloves long before Covid. He had to advise people to follow the Covid rules at the start of Social Distancing, “But not so much now”.