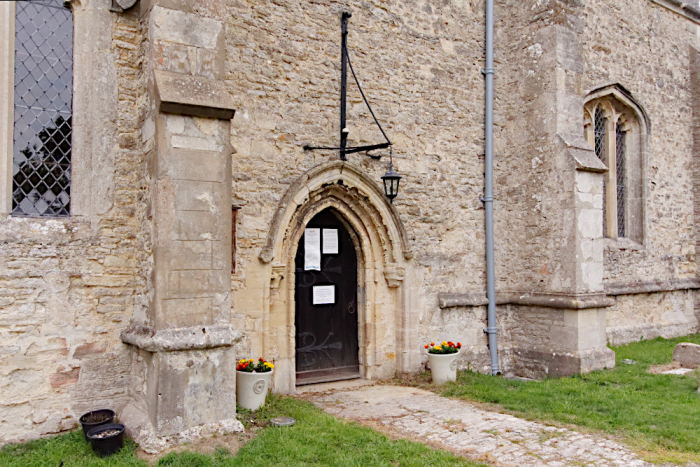 But it should say, Shakespeare had a few lunchtime pints and dozed off in the wooden porch that once sheltered this door, in Grendon Underwood church.

It’s said that he was found asleep there by the two village constables. The constables shook him awake and roughly turfed him out of the porch. One of them was the Rector’s son, a Mr. Josias Howe.

As Shakespeare stood there, both half sober and half awake, they accused him of stealing from the church, but our William took them inside and pointed to the wooden chest there. “Go and see”, he told them. They looked in the chest, but they could find nothing missing. “There!”, said Shakespeare, “Much ado about nothing!”

It all seems a bit of an unlikely tale, but it’s quite possible that Shakespeare was thinking of these village constables when he wrote the unflattering parts of those two fine men of the watch, Dogberry and Verges. Of course in his play Much Ado About Nothing.

Shakespeare stopped overnight at Grendon Underwood several times on his way to and from Stratford-Upon-Avon and London, and stayed in the half timbered inn The Ship, not far from the church. It’s now a private house.

In Shakespeare’s time this area was more heavily wooded, and the village lay on the forest tracks used by gypsies and strolling players. ‘Grendon Underwood’ means ‘Green Hill under the wood’.