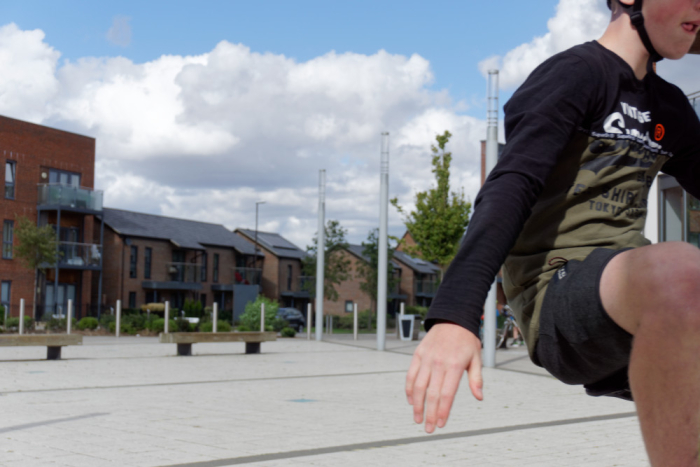 Saturday the 22nd of August was World Street Photography day, but what is street photography? It’s the photography of people in public places; mostly in the streets, but it could be on the beach, at the railway station, or in any public place.

The very best street photography shows us something of life. It isn’t an easy thing to do, and there are many failures. A fraction of a second late, this week’s photo would have been a failure. As it is, it works.

The boy’s tongue is curled in concentration. The straps of the bicycle helmet, the bicycle seat, his raised knee and his hand out for balance all tell the story, but if I had missed the tongue, the photo would have been useless.

I’ve just had a look at last year’s photo. The subject is going left, not right, but until this moment I hadn’t realised how similar the two photos are!

The idea of the day is that photographers go out and attempt some street photography. It’s not the taking of a good photo that’s the idea, but just to get out and try to get a good one, even if you don’t succeed. So out I went. I enjoyed it.

I used to do quite a lot of street photography, but I hadn’t really done very much in years, apart from a few for The Distance Project (see the previous post). I think I’ll do some more now.

The 22nd of August was chosen because it was the birthday of the most famous and accomplished of all street photographers, Henri Cartier-Bresson.

Cartier-Bresson was born in France in 1908. He took up photography seriously in 1931 and bought one of the new Leica cameras. Compact and discreet, it was just right for taking unposed photos on the streets.

The point of taking unposed pictures is not to catch somebody out, it is so that they act unselfconsciously. Only then can a true picture of them be made.

The photographer also has to take a nicely composed and well timed photo, or people will not bother to study it.

Older street photography is also a valuable historical record; think of all those street scenes you sometimes see from only 25 or 30 years ago. Only when you see them do you realise how much has changed in the street and the people.

Cartier Bresson passed away in 2004 aged 95, but street photography still goes on. 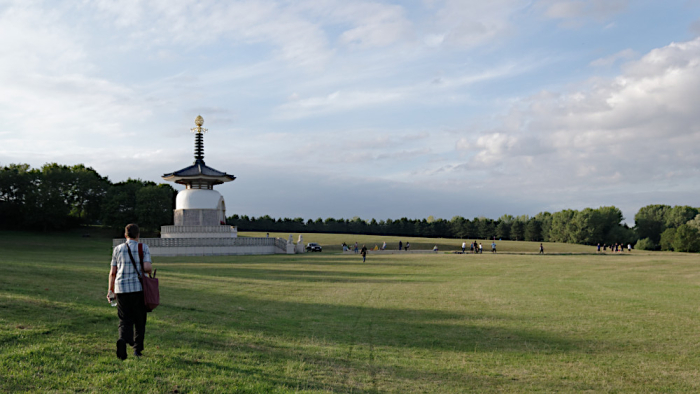 The Day the Bomb Dropped

After prayers and chanting, peace lanterns are carried down to the lake and floated out across the water as the sun sets behind the pagoda. The light in each lantern is meant to, aided by prayer, guide the souls of victims in the right direction, in order to ease their suffering.

Six weeks earlier, I’d gone, for the Distance Project, to see what would happen on the day of the long planned 40th Peace Pagoda Ceremony. I was surprised and pleased to find a very small, invite only ceremony, although the event had been officially cancelled because of the lockdown. It was all they could do.

I expected a similar scene when I went to the Lantern Ceremony and that’s what I found, but a few more people had turned up to the pagoda on the off-chance, too. Still, there were nowhere near as many there as usual. All around were other groups and small gatherings doing their own thing; exercising or picnicing in the public park.

All the posts from the Distance Project can be found here. The project is to photograph what people are doing differently under lockdown. 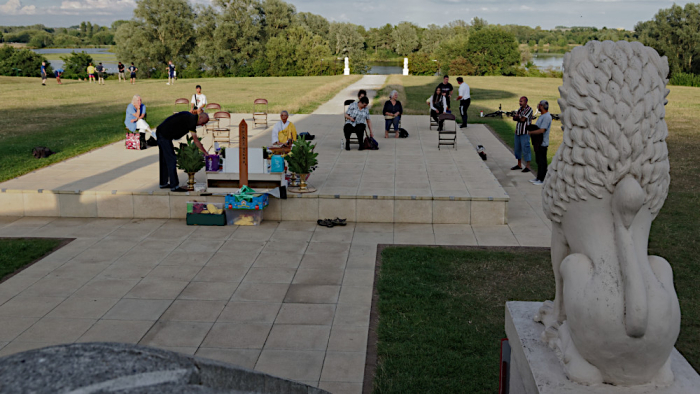 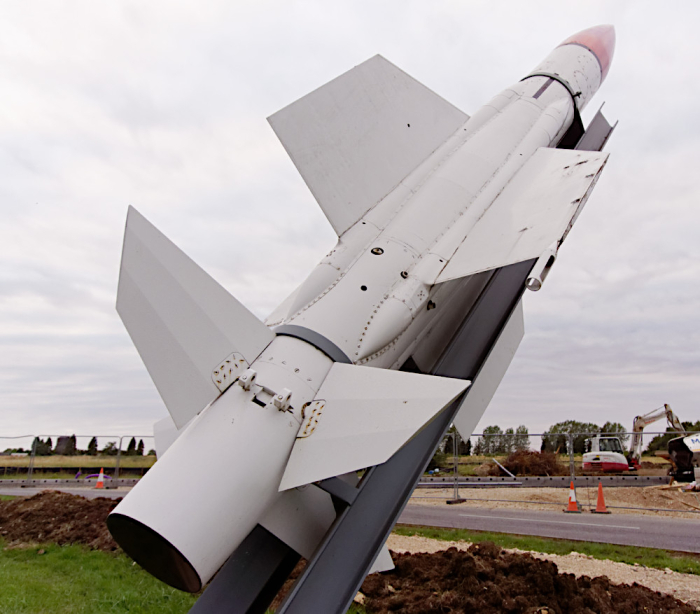 This is a twenty feet long guided missile, but what is it doing in a business park at Westcott?

This business park used to be the Rocket Propulsion Establishment. As a boy I could sometimes hear rocket motors being trialed at night, miles across the fields in Winslow.

Everything that happened there, apart from the very obvious noise of testing, was extremely hush-hush.

The English Electric Thunderbird guided missile, and this is one of them, was in service with the British army from 1959 to 1977. It could shoot down aircraft up to 30 miles away and get to the target at Mach 2.7, and at least some of its development was done at Westcott.

I can’t say for sure how much, because people still aren’t talking.

The Rocket Propulsion Establishment was set up in April 1946, and ran until the mid 1990s. Before that is had been RAF Westcott.

Like every other RAF airfield in North Bucks, it had been an Operational Training Unit. Here, Wellington bomber crews were trained in navigation and leaflet dropping (often over enemy territory) and in night bombing.

In the last few days of the war in Europe and just after, RAF Westcott was part of Operation Exodus, where former Allied prisoners of war were brought home from prison camps in Europe.

RAF Westcott received 50,000 ex POWs, part of a total of over 354,000 men returned by plane, some after four or five years of captivity and isolation from their loved ones. Some men wept when they got back to England.

I think this is the first version of the missile. An improved missile, introduced in 1966, was known as Thunderbird 2. But I always thought that was a big green aircraft flown by International Rescue…

How to Start a Photo Project 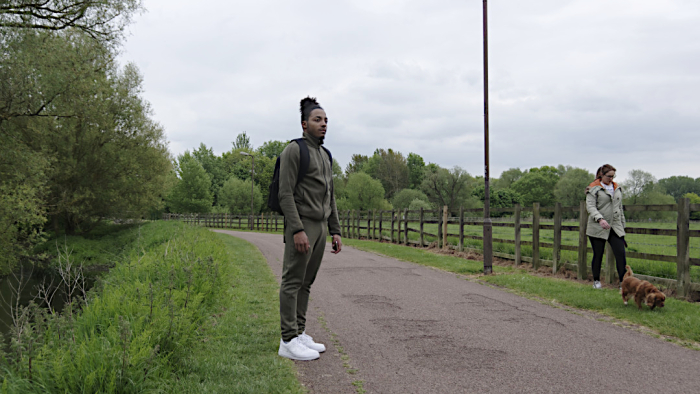 From The Distance Project 1. Note how the dog walker takes a wide berth from my subject. There's two metres between the main subject, and the left hand side of the frame. This could have been taken with almost any camera, but I used the K3 and 16-50mm zoom lens.

It’s been over three and a half months since I started The Distance Project, and it's going well. If you want to start on your own photo project, you need just two things: a camera, and a clear idea of what you want to do. Perhaps you want to document a year in the life of your garden, or of your grandparents.

Any camera at all can be used. What sort of camera it is might make a difference to what you can photograph, but the vast majority of pictures in this project could have been taken on almost anything.

So first I’ll talk about the idea.

Continue reading "How to Start a Photo Project" » 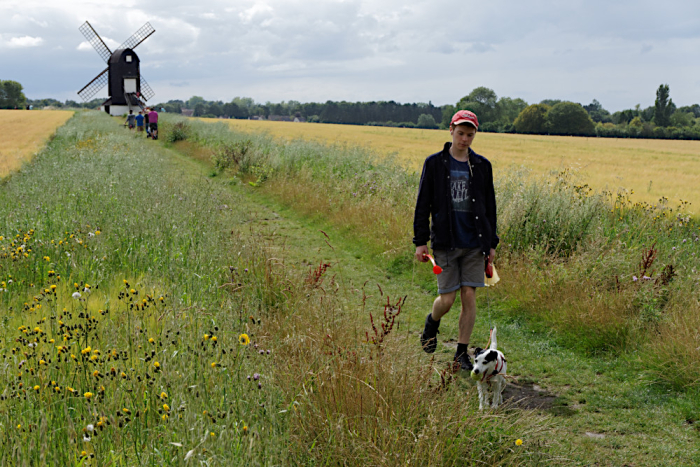 This is Pitstone windmill. It's the oldest windmill in the British Isles, and there are several ancient dates carved into the mill. The oldest is 1627, but the mill may be even older. It’s a post mill, turned into the wind on a great central post.

Unlike Quainton’s windmill, where just the top turns automatically into the wind driven by its fantail, the miller at Pitstone had to turn the great bulk of the mill by walking around at ground level, pushing on the tail pole.

You might just be able to see the red painted wheel it ran round on, in the photo.

Not facing in the right direction led to the mill being wrecked in a violent storm in 1902. Damaged beyond economic repair, it rotted in the fields for 35 years, then it was given to the National Trust.

They eventually rebuilt it, and in 1970 it was once again able to grind corn. But now, fifty years later, the sails cause too much vibration when they turn and the mill can’t be used.

In normal times, Pitstone Mill is open to the public. But there’s not much room inside a mill and social distancing must be impossible. However, as you can see, visitors do visit the mill. But they can’t go inside. 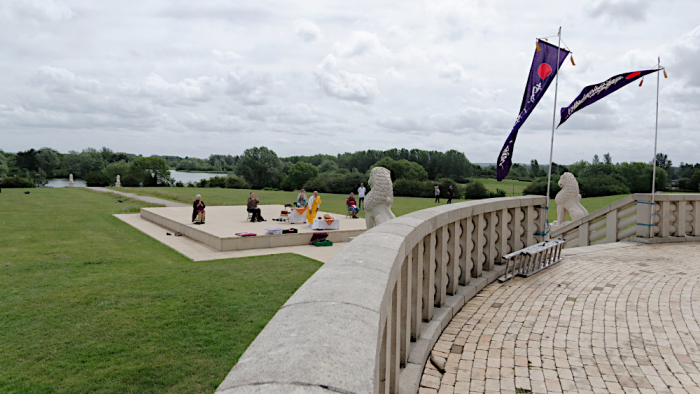 If the ceremony had gone ahead as planned, this scene would have been packed with hundreds of people. The low platform, recently rebuilt for the ceremony, would have been filled with Buddhist monks and nuns, some from Japan or other countries with peace pagodas.
The man beyond the platform wearing dark trousers and a white shirt is from the Parks Trust; it’s their land. Like me, he was there to observe, but not participate. Anyone else you can see here is just a passer by.

It’s been forty years since the Peace Pagoda in Milton Keynes was finished. This year’s ceremony, the 40th at Willen, was planned to be an important milestone event. Hundreds of people from all over the world would attend and I was looking forward to it.

But the lockdown put paid to that idea. Officially, there was to be no ceremony at all this year. But I turned up to take photographs anyway, to see if anything would happen.

I thought I would perhaps see a monk or a nun chanting for a few minutes, or I would be sat there all afternoon on my own. Either way, I would take photos, if only to record an absence.