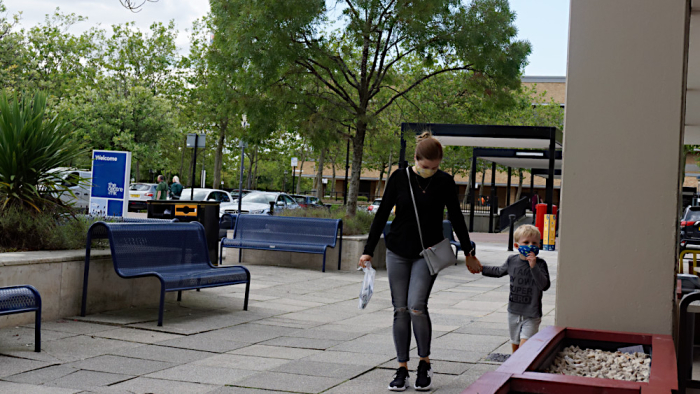 Approaching the Centre:MK shopping centre, a woman and child already have their masks on.

I had a book to collect, so I drove up to Central Milton Keynes, with my mask and some book tokens.  New rules about wearing a face covering or mask had come in on the 24th of July, four days earlier. Shop workers are not required to cover their faces, but sometimes they do.

Like the majority of people there, I wore my mask all the time I was in the shopping centre. We are required to do so under the rules.

By the way, some bookshops will accept book tokens on their websites; I ordered another book online and it arrived today, paid for by book tokens. Also, Waterstones will accept their own gift cards as payment online.

It's thirteen weeks, three whole months I've been on this project. I’m just numbering the photos I show you here as I go along, and the last photo here is number 120. But I have many more photos that I’m not showing you.

Sometimes photos won’t come across well on the blog because the relevant detail can’t be shown here clearly enough; the blogging software compresses photos and they lose fine detail.

Other photos may repeat something I’ve already shown you, but they need to be kept, to preserve as complete a record as possible. All the previous posts on the Distance Project can be found here. The project is to photograph what people are doing differently under lockdown. 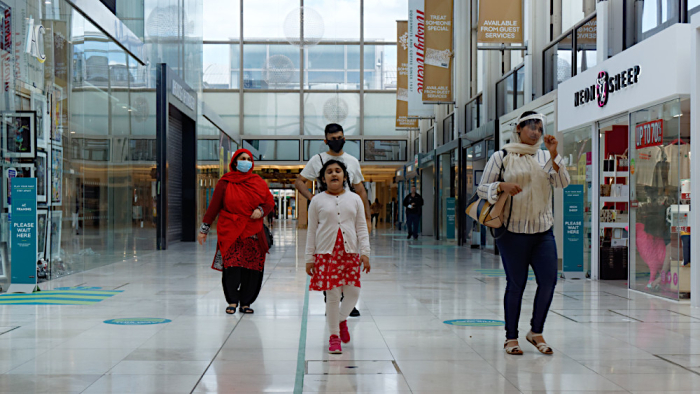 This family group in the Centre:MK wore a variety of face coverings. Children under 11 like this girl do not have to wear a mask.

I'm running late this week, so the usual Thursday post will be up some time tomorrow. Sorry about that folks. 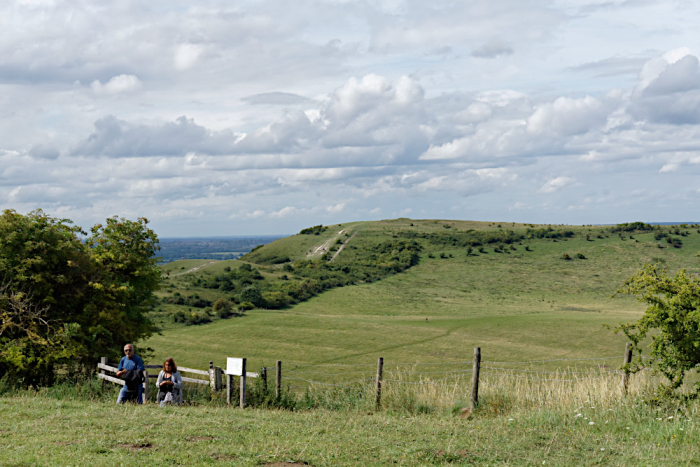 This is Ivinghoe Beacon, a steep sided hill that peaks at 756 feet above sea level. It’s not even the highest hill in the area, but it does have the best and widest views.

There’s a car park three quarters of a mile up the narrow lane that twists up the West flank of the beacon. The lane leads towards Ivinghoe Common and some woods belonging to the National Trust, with another car park.

I stopped at the first car park and took this photo from the picnic spot next to it. This is a popular spot but there’s plenty of room. The ice cream van was doing well and quite a few walkers went through the gate that leads to the beacon, half a mile away.

I haven’t been to Ivinghoe Beacon in 25 years. Last time, I parked at the bottom of the beacon and walked over and round the East side to the woods. Scenes from the film First Knight were being filmed behind the beacon.

The set was in a large clearing at the edge of the woods, three quarters surrounded by trees. I looked at the Saxon village the film company had built, and at the back of one of the cottages where the cameras couldn’t see, I noticed gas pipes ready to produce flames above the roof top when the cameras were rolling.

I sat and watched as the crew set up for the next shot, then I noticed something in the grass nearby. I reached over to find a bit of a film prop; a rubber arrow head, lost from its shaft. I still have it.

Filming began. The gas jets fired up, and I saw another gas jet at the window of the Saxon church. Horses and riders milled about, but I was a bit too far away to recognise the actors. They stopped filming. There was a bit of a problem; somebody had set light to a cottage they shouldn’t have.

That seemed to be it for the day, so I walked back over the hill to my car. The location is quite close to the car park I stopped at yesterday, but I don’t think it was there when the film was being made. There’s nowhere else to stop on this narrow lane.

After a quarter of a century, the clearing is difficult to pick out. I’m not even sure I found it, but it was nice to go back to the Beacon after all these years.

Ivinghoe Beacon is the site of one of a network of warning posts set up in Elizabethan England, to summon men if the Spanish invaded.

Local men kept a 24 hour watch, observing the next beacons in the chain in either direction, to see if they were lit. If they were, their own beacon would be started and the message passed on. They did not use bonfires, but instead set alight pans filled with pitch.

Centuries before the warning beacon in the late Bronze age and early Iron age, there was a hillfort on the top of Ivinghoe Beacon. There’s not much left of the ditch and bank, but there are numerous barrows (burial mounds) on and around the Beacon. There’s a visual reconstruction of the hillfort here.

Ivinghoe Beacon is a National Trust site. The lane that goes to the car park is a turning off the South side of the B489, which runs along the foot of the Beacon. The nearest postcode is HP4 1NF. 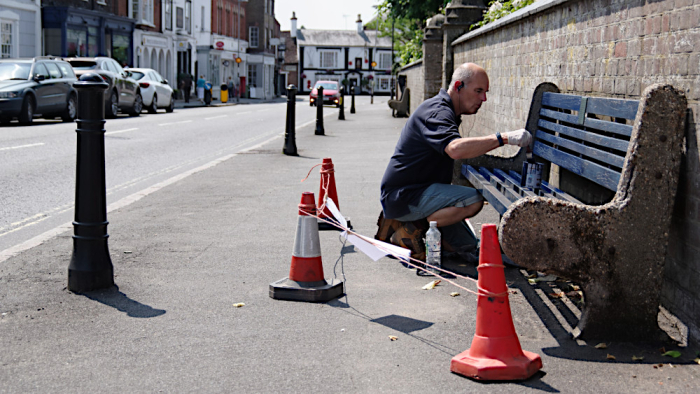 In Winslow High Street, the painter has put these cones up to encourage people to keep some sort of distance. It’s difficult; the High Street is on a main road and the pavement isn’t very wide.

Wednesday is market day at Winslow, in the square. They have a system in place with separate entry and exits points. I parked in the High Street. As elsewhere, there’s a semblance of normality in the town.

A couple of pedestrians gave me a tip about a cluster of paintings and drawings in house windows, in a side street off Verney Road. After I had finished at the square, I drove up to see.

As ever, you can find all the previous posts on the Distance Project here. The project is to photograph what people are doing differently under lockdown. 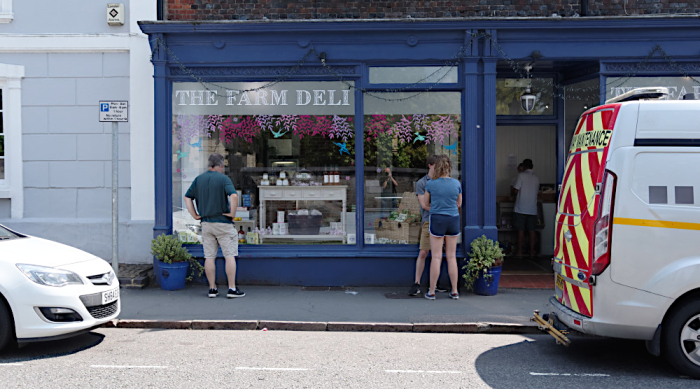 Queueing at the Winslow deli, almost opposite the benches. 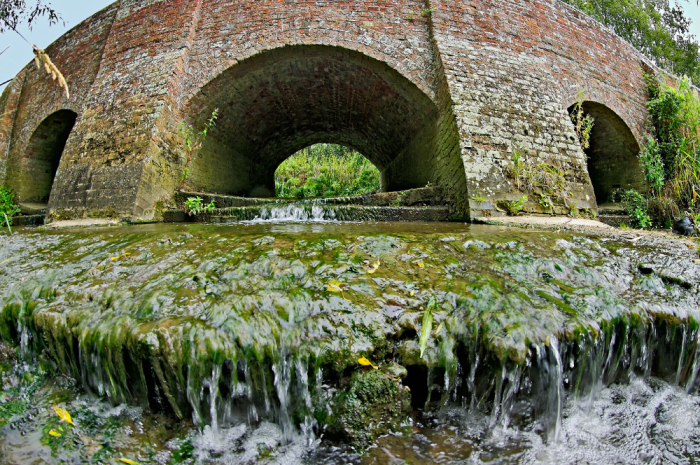 This is where we used to go as kids, to fish for sticklebacks. It’s the bridge that carried the new 1722 turnpike over Shipton Brook, just outside Winslow. On summer days we would paddle around with our jam jars and nets, just here in front of the bridge.

The old turnpike didn’t go through Winslow. The closest it got was East Claydon.

This is the downstream side. On the upstream side, you can still make out the route of the ford, gently sloping towards the brook.

The bridge hasn’t been part of the main road since 1937, when a new bridge was built and the road was straightened.

It wasn’t the first time the road had been altered at Shipton. At the top of the rise, where the road now sweeps round to the left, was a ’T’ junction. Part of the ’T’ junction remains as the first right angle bend in the side road through Shipton.

The two timber framed cottages set back on your right as you drive up the main road were once right against it. Other houses on the other side of the road, and there wasn’t a huge gap between them, were demolished in 1822 when the main road was altered.

From there, the brook heads West, then joins another brook near Padbury. Then the bigger brook flow North and under the ancient bridge at Thornborough.

I still visit the bridge at Shipton brook when I’m passing. 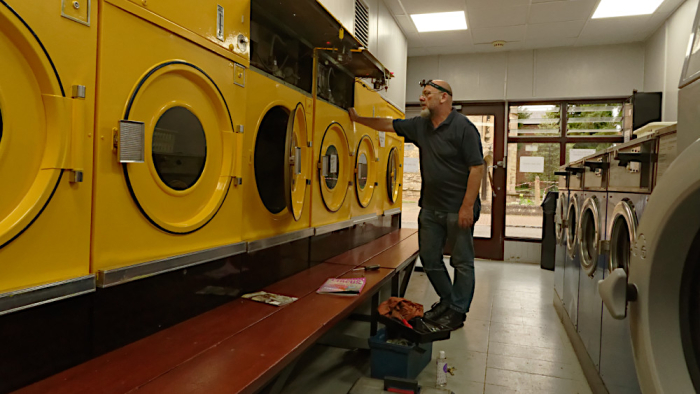 With my electro-mechanical hat on instead of my photographer’s one, I maintain and fix the machines at the Washeteria launderette in Church Street, Stony Stratford. Here, I’m checking to see that a dryer is working okay. Since the lockdown, If I work there it’ll be in the evenings, when the launderette is closed. There are no issues with distancing then; I’m on my own.

More From Stony Stratford, and what I’ve been up to under lockdown.

Many of these photos of Stony Stratford were taken back in mid June, and some lockdown rules have been changed since then. There’s also some shots from my own life, to show you how I deal with social distancing.