Signs of the Times. 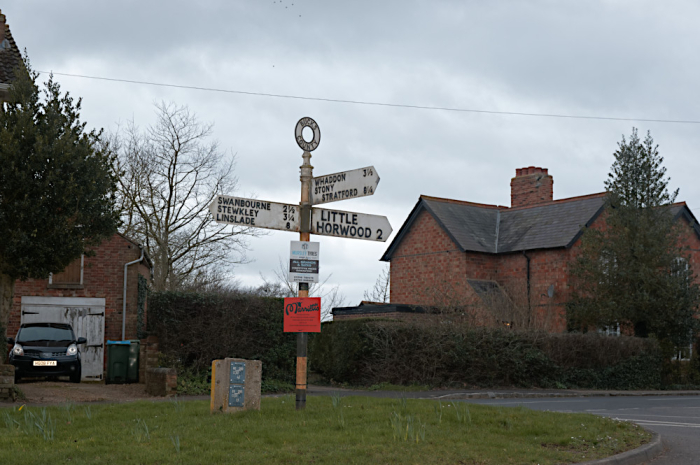 In the middle of March, I started a photo project about a small area of Buckinghamshire. Wary already of Covid-19, I began to take photos; not of the people, but of the places. I started here, in Mursley.

Ten days after I took this photo, we were in lockdown and the project ground to a halt; I haven’t taken a single photo for that project since. Instead, I have been busy with my Distance Project, far more relevant for now.

This is a finger post. Sometimes they are called guide posts. Dating from the early 1920s, there are hundreds of these cast iron signs all over mainland Britain. Most of them have this same circle on the top, with the name of the council that looked after the roads, but some used a different design.

Dorset and the Yorkshire West Riding areas both had a bar across the circle with the name of the parish; it looks a bit like a white version of the London underground sign. Somerset County Council’s signs have a four sided pyramid with SCC on each face.

Design guidelines were issued by the government in 1921. The posts and fingers were to be white, the letters upper case, and two and a half or three inches high.

But on this finger post, the letters that spell “Little Horwood” are much bigger than three inches, though it was probably the smallest village of the lot. I think it’s to fill the finger, which has to be the same size as the other side because of how the clamps work.

In 1930, the font was changed and the posts had to be painted with black and white bands, but I can’t work out when this particular sign was erected. All I know is, it’s not the first one on the junction, as late 19th Century maps show the letters G.P., for guide post.