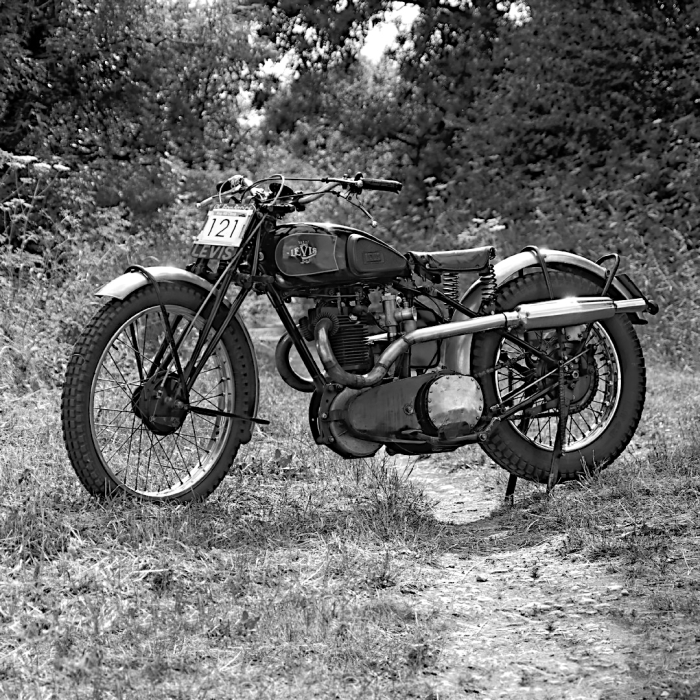 It was July 2010. I had borrowed this bike from its owner Graham and ridden a short way up this track at Clifton Reynes, which leads to footpaths that go across the river to Olney.

I wanted to photograph the bike for a range of biker’s greeting cards I later went on to produce.

I moved the bike around a couple of times, then settled on this composition for the card. To get a nice low viewpoint I lay in the middle of the lane. I thought I would be safe enough as the track doesn’t see vehicles from one month to the next.

Then from behind me I heard another bike. Two vehicles in one day! It was Graham. Some comedian we both knew well had told him that I had a tendency to fall off borrowed bikes (a lie!) and as I’d been gone quite a while, Graham rode up to see that all was well.

He was very relieved to see that we were both okay. I had already got my shot, so we rode back down to the pub garden where we’d started.

Graham tells me that the bike is a 1932 Levis (pronounced Le-vis, not Lee-vize like the jeans). It has a 350cc 4 stroke, single cylinder engine with overhead valves; quite high tech for the times. You might have noticed that has two exhaust ports and two exhausts, even though it’s a single cylinder engine. This was quite common on bikes between the wars.

The bike was built by Butterfields of Birmingham, who made bikes between 1911 and 1940. They built competition winning 2 strokes up to 1928 which did very well in road racing, including the TT, while the 4 strokes took to the mud with trials and scrambling.

This bike was hill climbed with great success by Pete Robson from Market Harborough.

Pete competed in motorcycle trials and scrambling all his life, and was a leading figure in the Vintage Motorcycle Club before his death a few years ago.

Graham still has this Levis and it’s close to 90 years old now. But remember, we don’t own old motorcycles, we just look after them for a while.