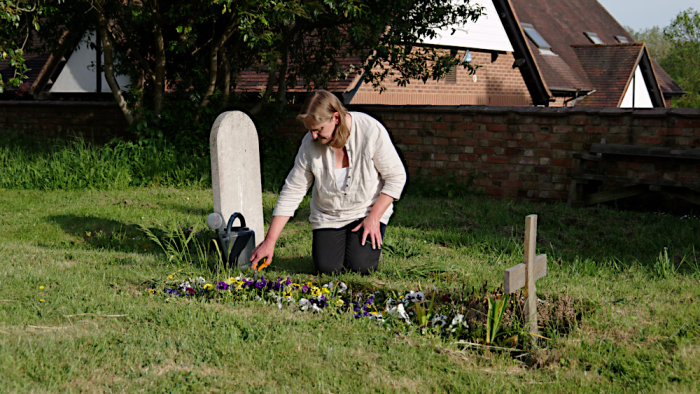 Charlotte Hall has come to the churchyard to tend a grave for her neighbour, who is unable to leave home during the lockdown.

This week’s photos are mostly from out in the countryside, and from the park by North Willen lake in Milton Keynes. While some businesses are able to carry on with restrictions, others remain closed. But it’s now okay to travel further to get exercise and fresh air.

All the other photos from this project can be found here. 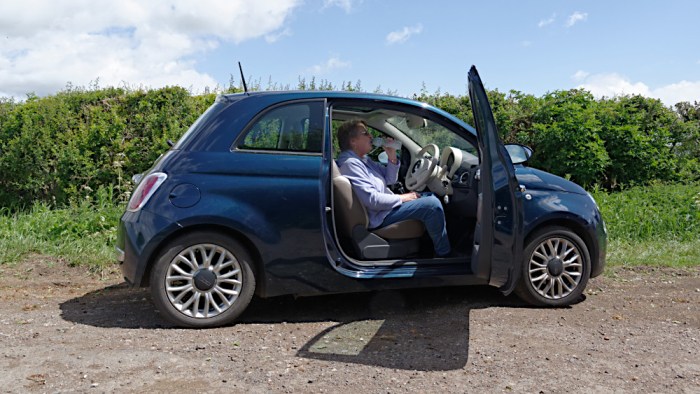 Bessie Davis came from Steeple Claydon to walk along footpaths between Botolph Claydon and Granborough, but it was so windy she decided to stay in the car. It was a wise decision. Half an hour later she would have been caught in a short but heavy shower. 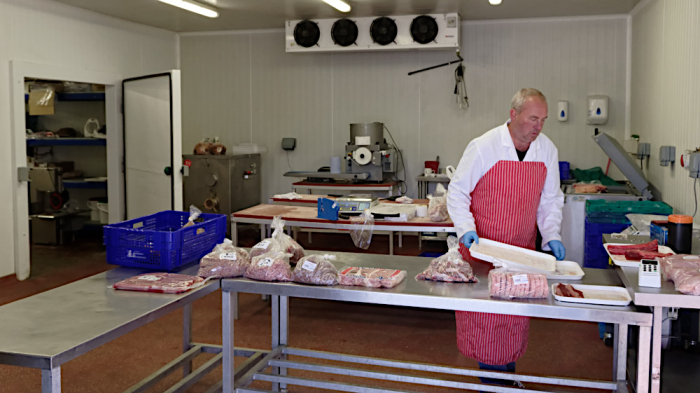 In J.C. Meat’s farm unit at Hogshaw, Charlie the butcher puts away meat on Saturday lunchtime after the shop has been open all morning. The shop has been opening as usual on a Saturday but they’ve now set up an ordering scheme. It takes just a couple of minutes to collect and pay for your order; cutting risk to a minimum. They’ve also started making Friday deliveries to help those who have to socially isolate. 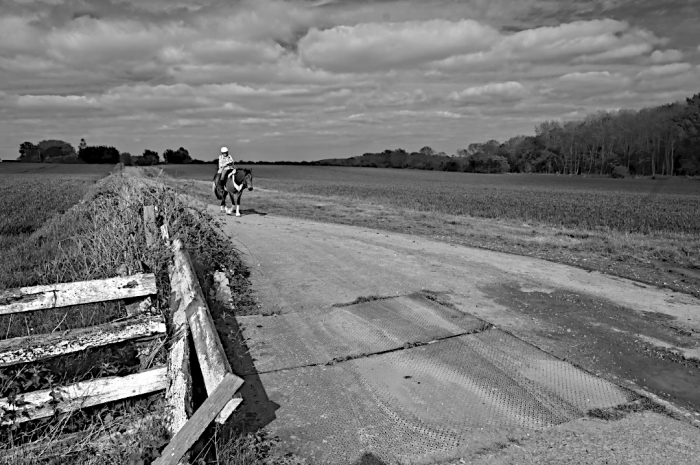 This is ancient Weasel Lane. We are out in the countryside just North of Mursley, but the lane stretches all the way from Bletchley to Winslow, and is part of National Cycle Route 51.

At Bletchley the lane starts from the old Buckingham Road, opposite one end of the golf course. Don’t confuse Weasel Lane with the blocked off turning at the other end of the course and close by the roundabout; that’s part of the old road to Buckingham.

From Buckingham Road, Weasel Lane cuts across the fields, crosses the road not far from Newton Longville, and less than a mile later, passes the spot where this picture was taken.

Behind the camera, the lane (and the cycle route) cross the disused railway line and a few miles later reach Shipton, just outside Winslow.

National Cycle Route 51 runs from Felixstowe to Oxford, and Weasel Lane is a five mile stretch in the middle of the route. The lane get its name from “Was Hael”, a Saxon Salutation between travellers. All the playgrounds at South Willen Lake are blocked off.

This photo project started very simply, as posed photos of people exercising under social distancing restrictions in my local parks in Milton Keynes, but I’m now expanding the scope of the project to other areas of life under efforts to fight the pandemic.

I’m also able to go further afield now there’s been some relaxation of the lockdown. Recently I’ve been to Willen lake, Woughton on the Green (both not far from where I live), Newton Longville, and Whaddon.

All the other photos so far can be found here. 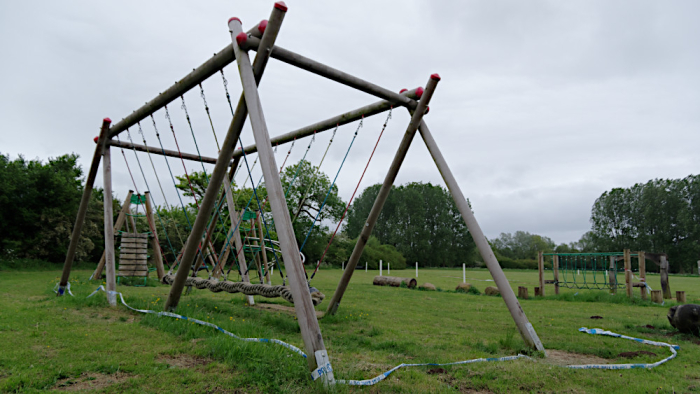 This play area at Simpson had been taped off because of concerns that the Covid-19 virus could be picked up from the surfaces. 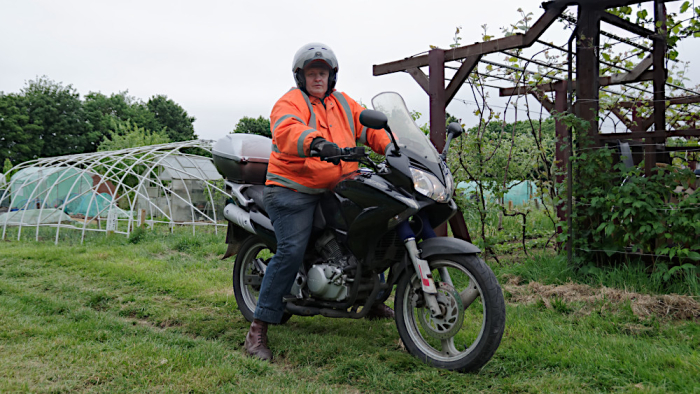 This rider had come to the allotments at Woughton on the Green to look after a friend’s plot. The friend is stuck abroad because of lockdown restrictions.

A Visit From the Boys 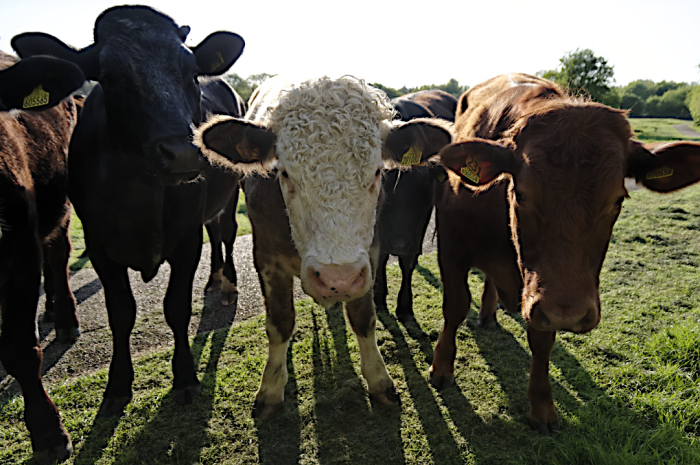 I walked across the field to the Hawthorn trees in the corner. They were on the river bank. It was a warm sunny evening. In the field, bullocks were calmly feeding. I had come to photograph the May blossom for last week's Monday Photo.

I concentrated on photography, my back to the field. I could hear the bullocks moving around as they cropped the lush grass, but I took little notice.

A few minutes later I felt a snort of warm breath. I turned round to see a bullock having a good sniff at me, his huge white head not an inch away. Around and behind him, every other bullock in the field had come with him to see what I was up to.

He sniffed at me again, and as I looked at them they drew back a little. I began taking their pictures, but with me now facing them they soon drifted away and left me on my own.

I turned back to the Hawthorn blossom and raised my camera again. 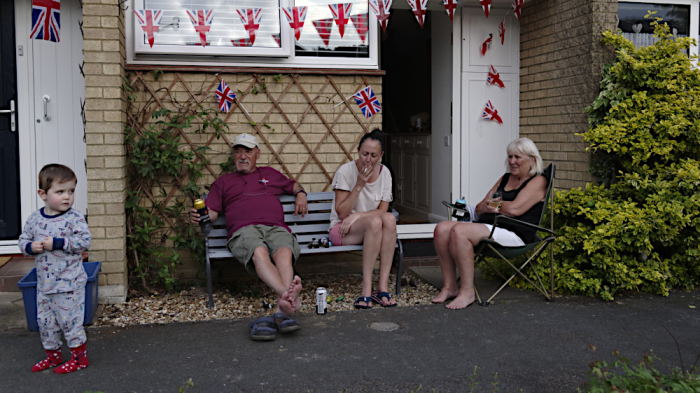 The 75th anniversary celebrations of the Victory in Europe were not meant to be like this, but I still found celebrations going on under the lockdown. In the last photos here, taken as night fell, the residents of a close came out to sing along with Vera Lynn. They finished of course with We’ll Meet Again.

More from the Distance Project next week.

All the photos from the Distance Project can be found here: 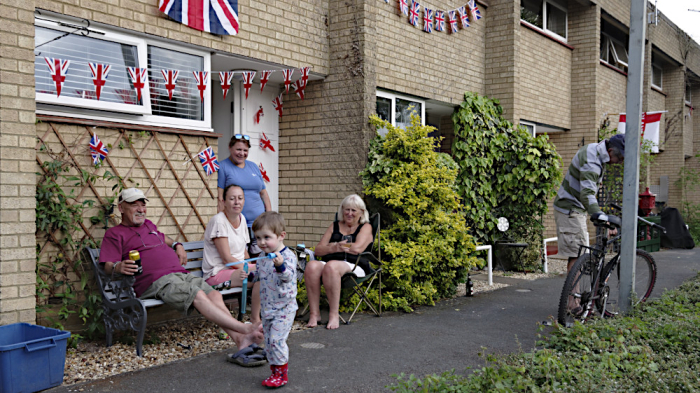 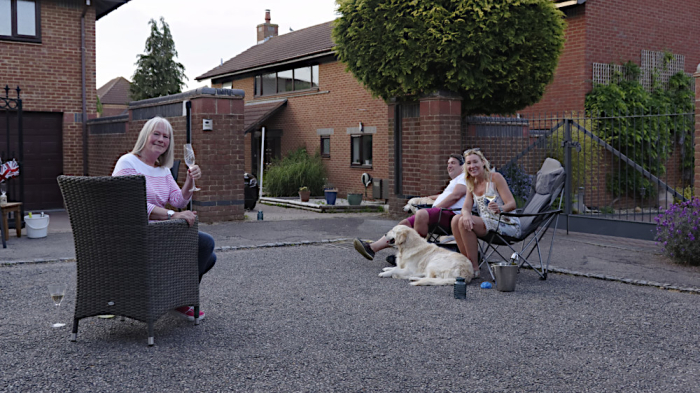 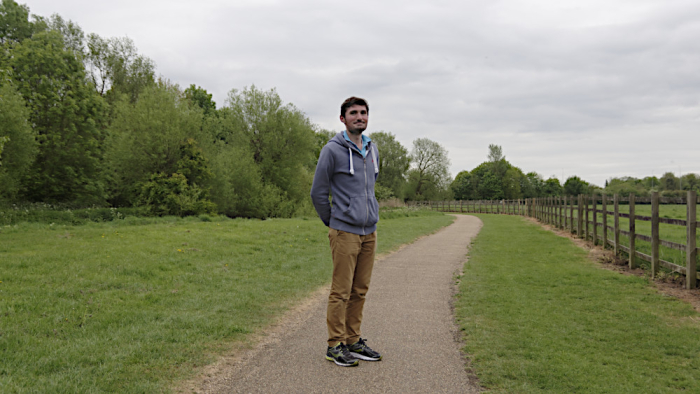 Dogs, walkers and looking after mum.

I have a lot of photos from my Distance Project to show you this week, so I’ve put some of them in this extra post. As before, most of the photos are composed with a good two metres between the subject and the edges of the picture.

In the usual Thursday post, I have photos of Friday’s 75th anniversary VE Day celebrations under lockdown.

More photos from the Distance Project can be found here: 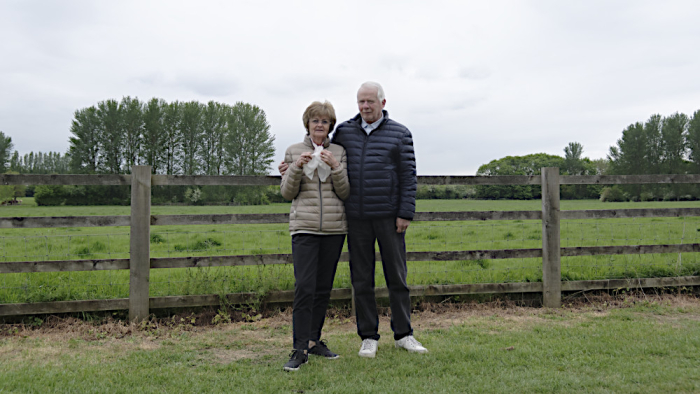 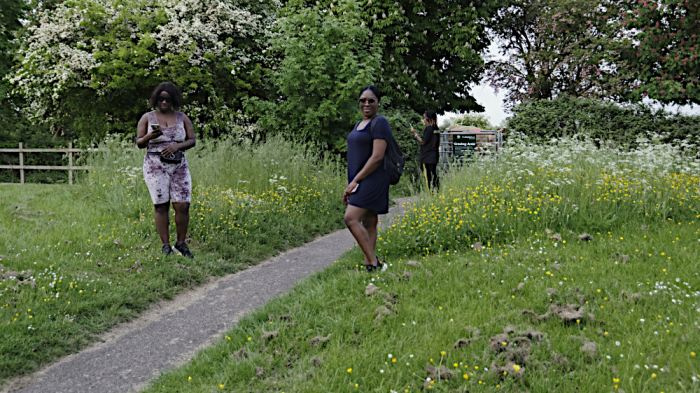