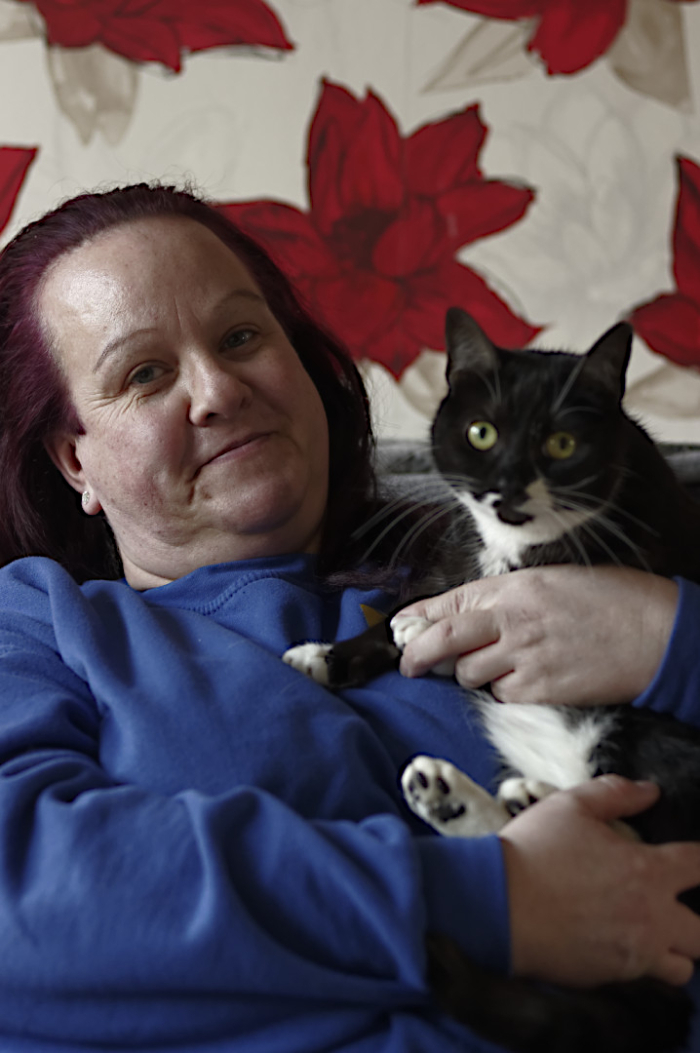 Before everything could be arranged to do this, Sarah went to visit her brother at his house. But when she arrived at the house, she discovered his body. Mark had died of pneumonia; he was just 46.

Mark had loved cats, and at his house were a pregnant cat and a mother cat with kittens.

It was a bad time for Sarah, but the cats had to be looked after. At first, the police would not allow her back into the house, and before she could get back in, the pregnant cat gave birth. Now there were two adult cats and two lots of kittens.

Aimee, now the branch coordinator, found some temporary indoor pens. When the police let Sarah back into Mark’s house she was able to rescue the cats and kittens, and look after them at her home. When the kittens were old enough, Sarah found every one, and the two mothers, new homes, except one kitten who she named Millie.

She still has Millie now, and Sarah is still in contact with some of the adopters. Sarah has been fostering cats ever since. 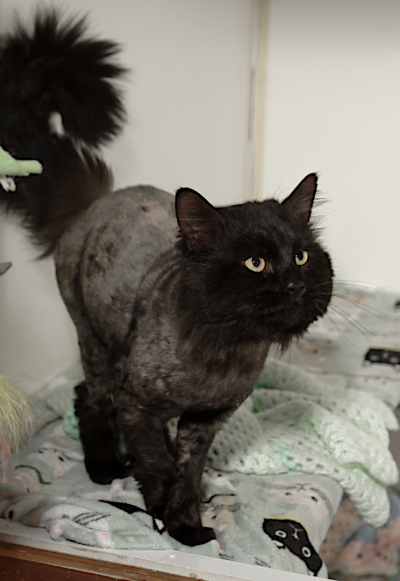 Because she has five of her own cats in the house, Sarah has to foster cats separately, in pens in the garden. She has one or two at a time, and the pens are heated in bad weather.

In one pen was Mr. Binx. He is a very large, long haired black cat, but he had been living on the streets and his fine coat had been badly matted; a whole kilogram of fur had to be shaved off. His head and paws didn’t need to be shaved, and the rest of fur is growing back nicely.

Despite a life on the streets, Mr. Binx is very affectionate and likes to give head bumps. He is about three and a half years old, and is now up for adoption.

In the other pen I met Tinkerbell. She is a small tabby cat, just six months old, and by the time you read this she will be adopted and in her new home. She likes a fuss too. 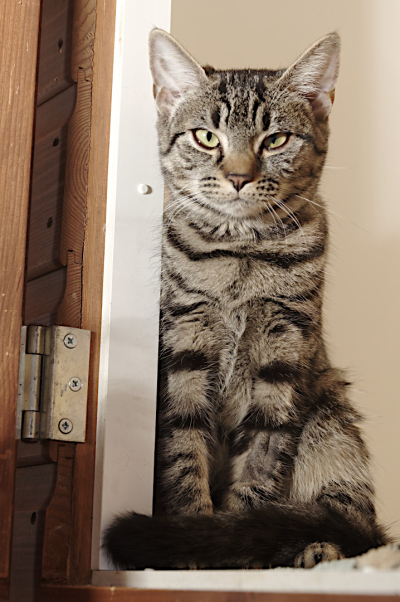 Tinkerbell in her pen.

Another rescued cat is Sasha. Nobody wanted to adopt this nine year old cat that had a serious heart murmur, so now she lives permanently with Sarah and her other four cats.

There are two other charities involved with Sarah and Cat Protection. One is a rolling programme of Duke of Edinburgh Award candidates to help her with the fostered cats. Four times a week, different candidates come in for an hour each to clean the pens and do other jobs to help Sarah.

Once a week, a girl comes to visit Sarah and the cats for a couple of hours. She is brought by the MacIntyre charity, who support people with learning difficulties and autism.

At first, the girl was timid and would hardly speak, but it’s been over twelve months now and she will happily hold a conversation with Sarah. It’s great progress. 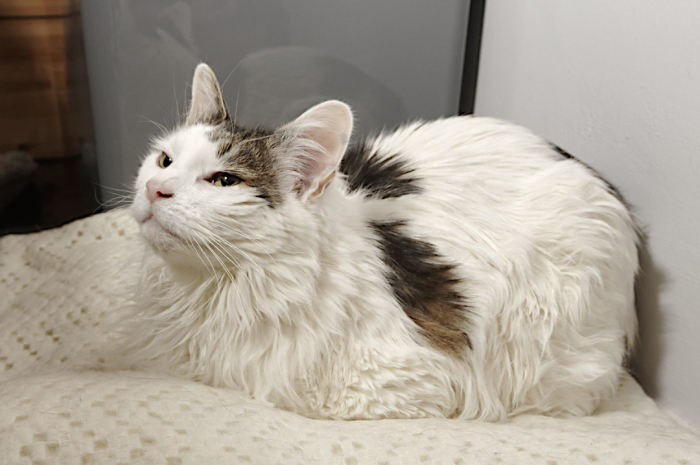 Sasha spend most of her time in the bedroom.

How to Adopt a Cat
The first thing is to go to the Cat Protection website, (this is a link to the Milton Keynes and District branch) and find a cat you like the look of. A home visit officer will come to your home and check that it is suitable; it shouldn’t be right next to a main road for example.

Some cats don’t like children, and others dislike men or women, so this all has to be considered. Once this hurdle is crossed, the home visitor contacts the fosterer who will get in touch with the potential adopter, and arrange for them to view the cat.

If there are children in the adopter’s house, they should come and view the cat too. If the viewing goes well, the potential adopters are given a 24 hour cooling off period.

If they still want to adopt, and 98% do, the cat can be adopted almost straight away.

Friday is a good day to adopt, Sarah tells me, as the cat can have the whole weekend to settle in.

“The Branch adoption fee is £65.00 for each cat, which includes one month’s free insurance. For this, the cat or kitten will have had a full vet health check, a course of vaccinations; been neutered, if required; had a microchip implanted, and received regular flea and worm treatment whilst in our care.”

Cats are fostered outside the immediate area, so a cat like Mr. Binx will not be adopted in Milton Keynes. But a cat from Winslow, for example, can be adopted by somebody in Olney. These towns are both in the Milton Keynes district of the charity. There are ten other fosterers in the district.

There are other districts, and you can find them on the main Cat Protection website, here.

Adopt a cat; they’re great company. My own cat was a rescue cat, though he came to me via a different, personal route. Cat Protection do a great job so if you see them at a local show, please support them.