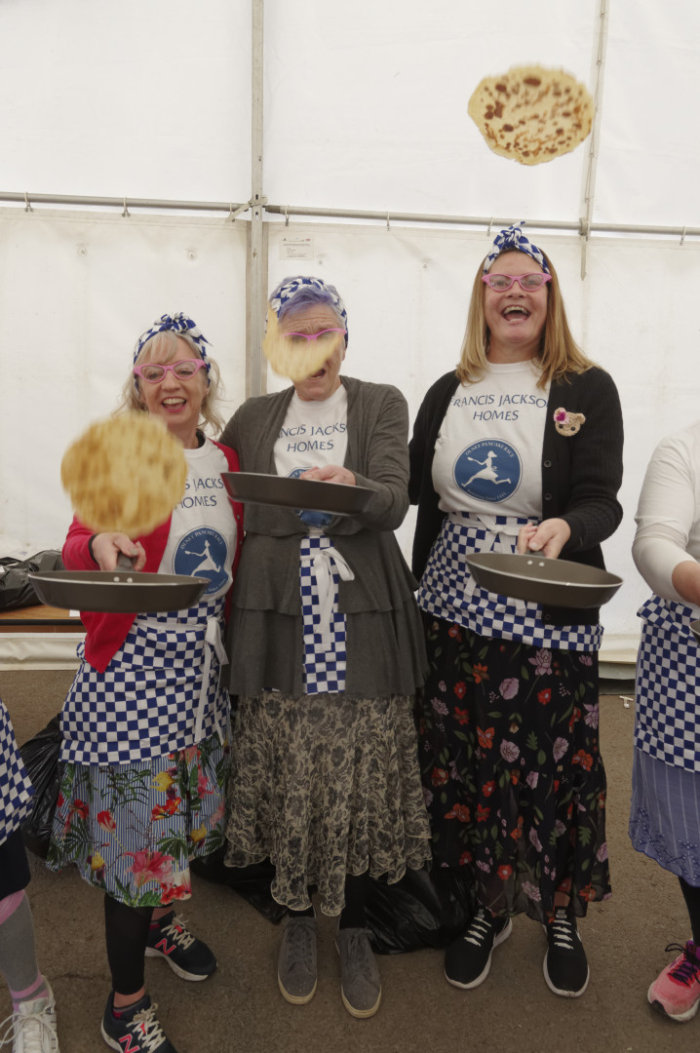 If it wasn’t for the old vicar of Olney, the town wouldn’t have its yearly race on Pancake Day. Back in 1948, the Reverend Canon Ronald Collins found some photos from the 1920s or 30s in an old cupboard.

The pictures showed women running down the street with frying pans; they were running in the pancake race. He decided to revive the old custom and called for volunteers.

On that year’s Shrove Tuesday thirteen women lined up at five to twelve and the 415 yard race began. Nellie Bosworth was the winner, and the Olney Pancake Race has been held every year since. 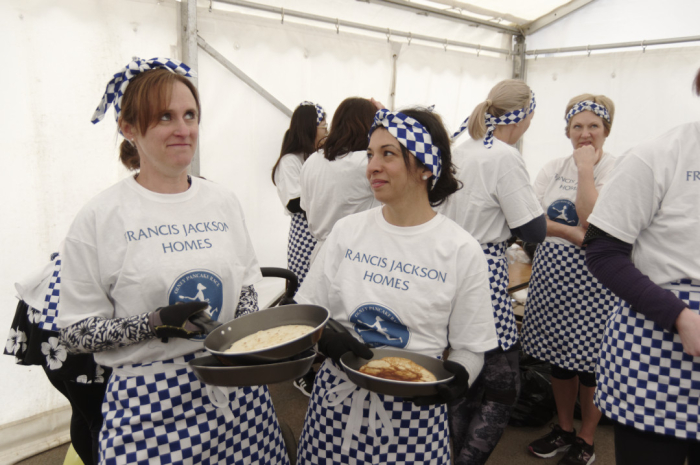 In the marquee, waiting to race.

In 1950, Olney was challenged to an international pancake race match against the city of Liberal in Kansas, USA. When it’s tea time in England but still at five minutes before Noon their time, they run a course that’s the same length as the Olney one. The two towns, over 4,600 miles apart, have now been competing for 70 years. 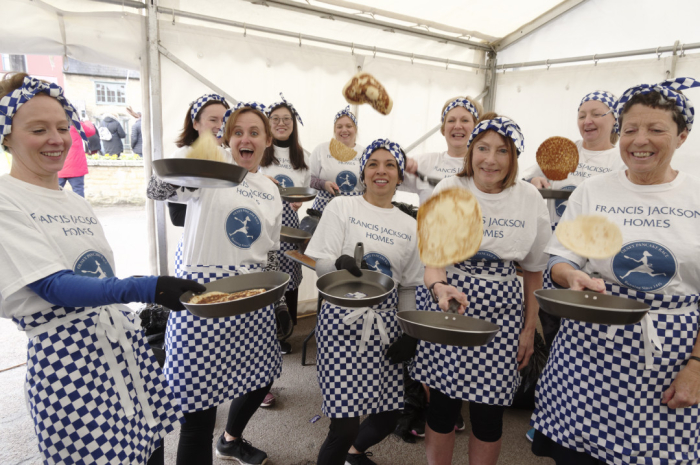 Pancake tossing practise before the start.

This year, Katie Godof pipped the second placed runner at the post to win at Olney with a time of one minute and six seconds. I would love to tell you who came second and third, but nobody’s telling; I can’t find the information anywhere.

In Liberal this year, Whitney Hay came first with a time of a minute, nine seconds.; Olney had won this year’s international competition by three seconds. The score now stands at Olney: 31 wins, Liberal 38. In 1980 it was a draw. 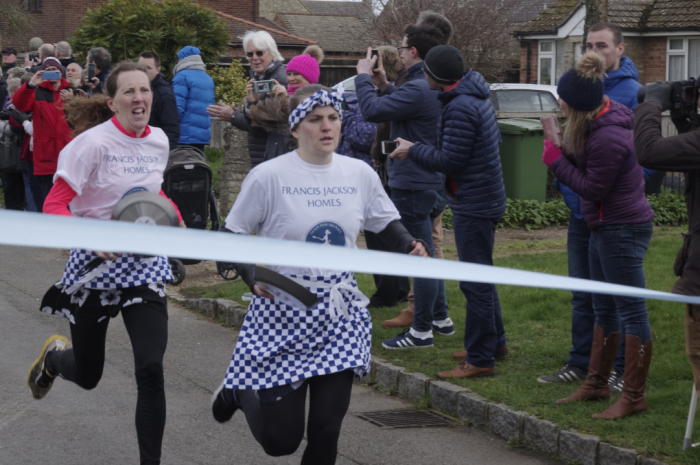 Katie Godof (left) coming up to overtake the 2nd placed runner just before the finish line.

According to tradition, the Olney race was first run in 1445. Although the tradition may have lapsed and been revived a few times it was never quite forgotten, and this is the 73rd year the race has been run since it started up again.

The race is always held on Shrove Tuesday, and next year it will be held on 16th February.

If you are female, live in Olney and are over eighteen, you can compete next year. Here are the official Reminders for Runners. 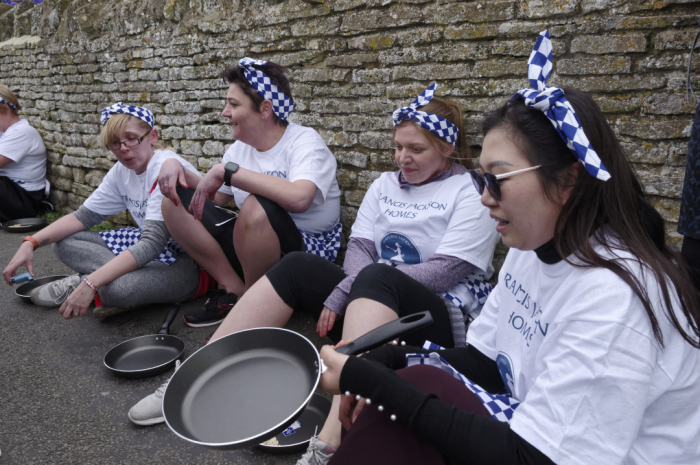 Runners get their breath back by the churchyard wall, after the race. 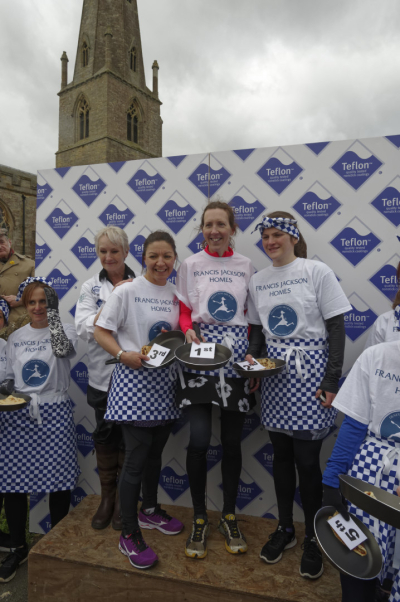 First, second, and third placed runners pose for the cameras. 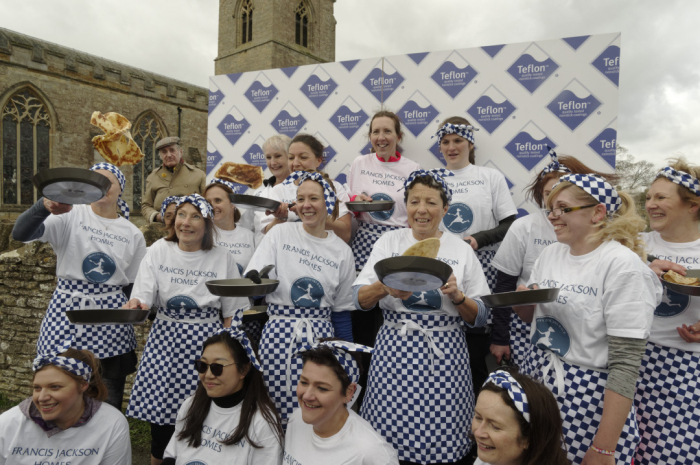 This year's competitors just before they went from the finish line to the shriving service, held in the church behind them.