The Railway That Nearly Was. 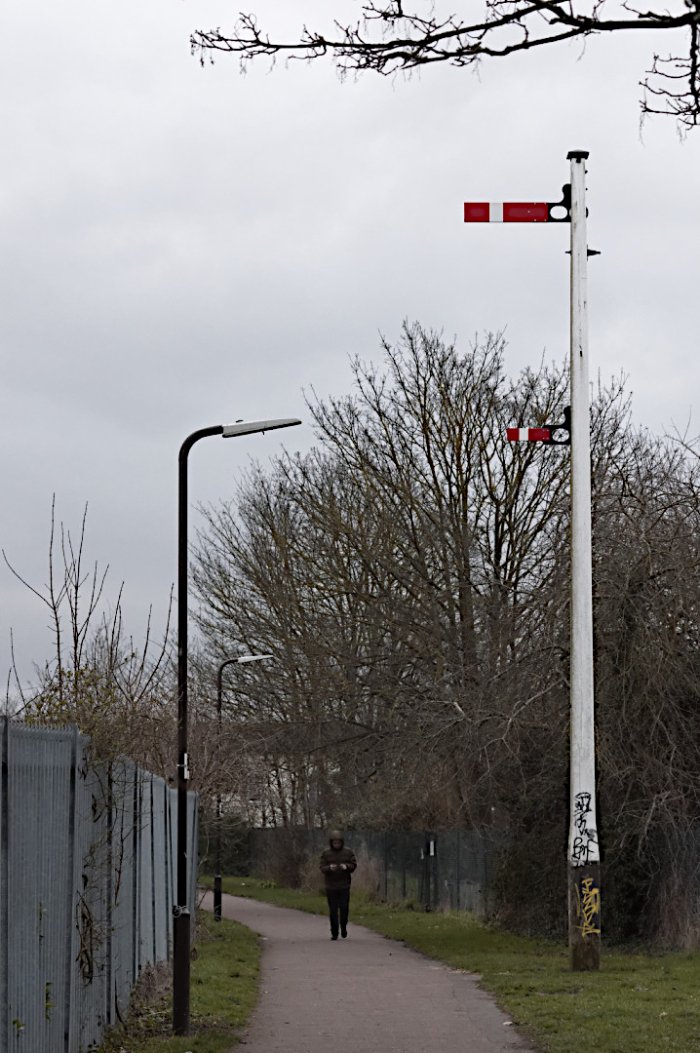 This home signal is all that remains of the last station reached; Newport Pagnell. The goods yard and station site is now under houses.

When you travel the back roads or footpaths between Olney and Newport Pagnell, you may notice long banks or hollows in the fields, crowded with trees. They are the remains of a railway that nearly came to run from Wolverton to Olney, and was planned to go even further.

Only the first four miles of the line was ever finished, less than one fifth of the total scheme. Who knows what other changes might have happened if the line had been completed?

But it had started well. In 1866 a branch line from Wolverton to Newport Pagnell opened, part of the London and North Western railway (the LNWR).

Already plans had been made to extend the branch line to Olney, and then to Wellingborough to join another part of the LNWR there.

Contractors started work on cuttings and embankments between Newport Pagnell and Olney in 1865, almost as soon as their work on the Newport Pagnell line had finished. A bridge was built over Wolverton Road the next year. It would take the line North through what’s now the police station.

But work stopped; the project had run out of money. There’s no sign of the bridge; it was demolished in 1875, and the bricks used to build cottages nearby. 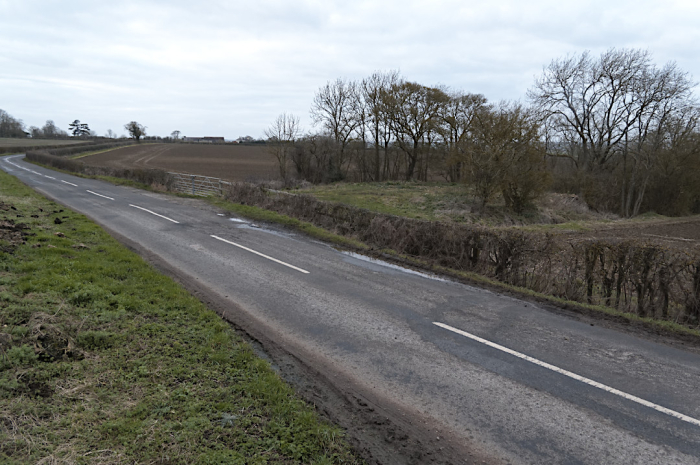 Until some time after about 1960, maps show a bridge and a cutting here. You can see where earth was piled into the cutting to make a ramp for access through the double gate, which is about where the bridge would have been. The trees to the far right are in the cutting.

There are shallow earthworks on Bury Field in Newport Pagnell, and a wooded embankment to the West of Sherington. It’s likely that a station would have been built at Sherington; many of the inhabitants were employed at the railway works in Wolverton.

About half a mile along the Filgrave road from the A509 had been a bridge. There had been a short section of cutting to the South, (now filled in) but on the other side of the road the cutting still extends down the slope of the hill, then becomes an embankment.

This is the longest section of earthworks remaining; it’s over half a mile long. By the road, soil has been poured into the cutting to create a ramp for access to the fields either side.There is no sign of the bridge that appears even on 1960s maps, but I think it’s still there, buried.

At Emberton is another cutting, not far from the village. I expect another branch line station would have been here. 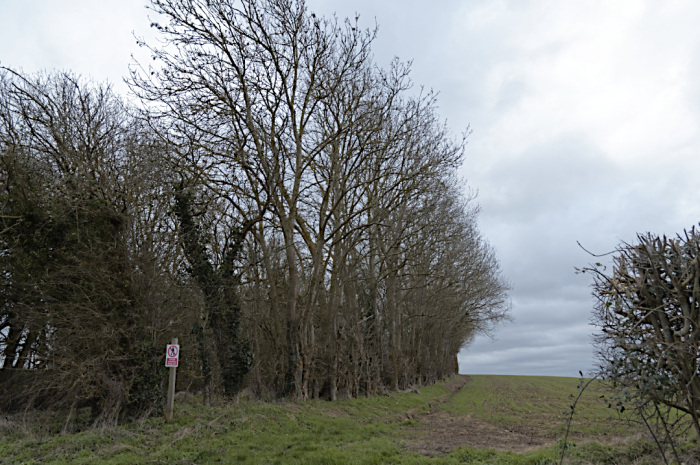 This row of trees mark the edge of the Emberton cutting that took the railway through the brow of the hill. The cutting is now full of trees and is utterly unphotogenic, which is why I didn’t take a photo in there. If Emberton had had a station, I think it would have been just behind the camera position.

The last piece of Earthworks on the way to Olney is in Emberton Park. Up to a dozen feet high, it’s now part of a play area, with a long slide and a twisty tube to whizz down. A gap in the embankment shows where a farmer’s bridge was due to be built. 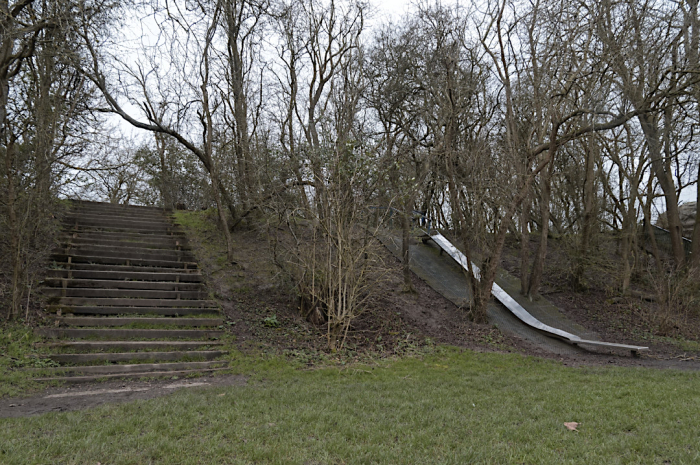 The embankment in Emberton Park is still at least a dozen feet high, and was the most Northern of all the earthworks constructed when the project halted. It’s part of the playground now.

From here, I think the line would have crossed the main road just South of Olney, and swung around the town to the East. Where the station would have been, I can’t say.

There had been a Station at Olney, but it was part of the Bedford to Northampton line, and once that opened in 1872, any chance of a railway being built between there and Newport Pagnell had gone. 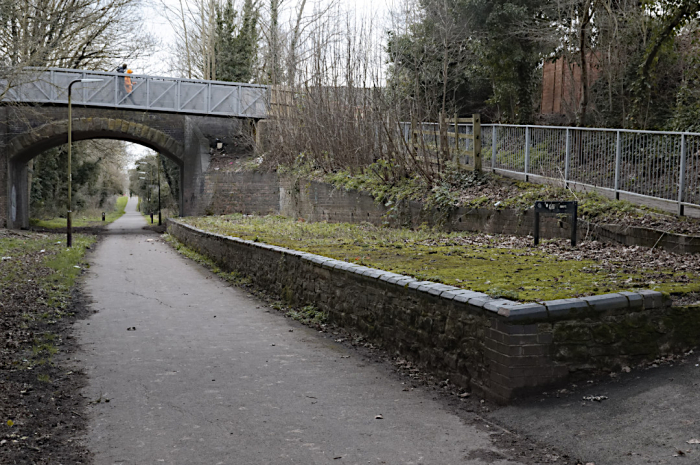 The first station from Wolverton was New Bradwell, on Bradwell Road. The village used to be called Stantonbury, but that's now the name of the estate at the top of the hill.

Access to the section of the route that was built is easy; nearly the whole of it is part of the Milton Keynes redway; the cycleway and footpath network.

At the Wolverton end, the path leaves the line to follow the canal, but most of the two cuttings that curved North and South on to the main line are still there, on the other side of the path to the canal.

The station platforms at New Bradwell and Great Linford are still there, but the site of the Newport Pagnell station is buried under housing. All that remains is the surprising tall home signal, beside the redway. 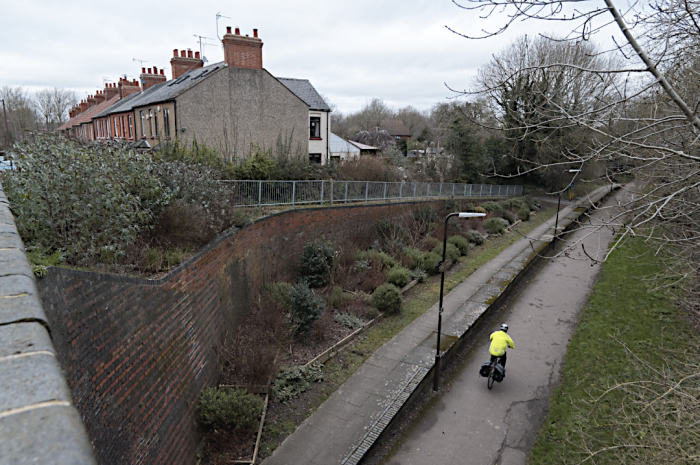 The Great Linford station was on what we now call Marsh Drive.

The last passenger train left Newport Pagnell at 5:34 pm on 7th September 1964, though goods were still carried until May 1967. The track was lifted later that year, the branch line a victim of Dr. Beeching’s cuts. This bridge near Newport Pagnell carried the M1 over the railway, after the motorway was opened in 1959. The branch line would be gone in less than eight years.

Very informative as usual. Can't believe you didn't pop in for a cuppa if you were over this way!! Have you ever considered doing guided walks for a select few?

Pauline
I would have loved to pop in for a cup of tea, but I was due back at Newport Pagnell, where somebody else had already promised me a cuppa. A bird in the hand and all that...

Yes, I have thought about doing guided tours; perhaps when the weather improves.

With regard to the earthworks in Bury Field NP, 30 years ago there was a small arched over bridge in the middle of the field. Has this been demolished, I can't see anything obvious from current satellite imagery? I used to live in Westbury Lane between 1984-87.

I haven't been to Bury Field for quite some time, (there's not much to see of the proposed railway there) so I had a word with a couple of people who have gone there quite often, but only in recent years. Neither of them know of a bridge.

My only thought was that there might have been a small bridge over the stream, but that's at the far edge of the field, not in the middle. That's all I know!

I run along the 'old railway walk' frequently and I noticed some photos online by the station at New Bradwell, and nearby to the windmill there was a spur off towards the North. Do you know what this spur was meant to serve?

Hi Alex
this spur served lime kilns not far from the canal. A map from around the beginning of the 20th Century shows three “Old Lime Kilns” and names the spur as Bradwell Sidings; it forked into two and the longest one stopped next to the kilns, just 60 feet from the canal. From the map it seems that the lime kilns and quarries were then disused.

The kiln used limestone from shallow workings on that side of Old Bradwell Road, and from a deeper quarry on the other side.

The map shows a track that connected with the deeper workings. It ran from the kiln and sidings and along the side of the New Inn that faces the canal. It continued on the other side of Bradwell Road, right next to the uphill side of (I think) that odd looking building that now has the tower and railings.

The lime kilns were in operation years before the railway, and I expect their lime was then delivered by canal. The spur you spotted is one of the few remaining signs this operation ever existed.

Thanks for flagging this up; I completely missed the spur.

Aha! Ok, that's really interesting to find out. So are you saying that a line went along the canal, between it and the New Inn? I can't think of where that odd building with the tower and railings is.... Did this line cross the canal?

Perhaps I should have said lane instead of track. The sidings stopped pretty much at right angles to the canal; they didn't cross the canal or the road.

That odd building is just across the road from the entrance to the New Inn car park. The tower (or turret) is set back from the road on its left hand side.

Aha. I visited some of the early 20th century maps and understand now. I took some pictures on Saturday which are on my instagram feed @solidpr0 if interested. I missed the turret tower though and will look for that this week.

I ran the almost entire length the other day including the fork just across from Grafton Street, which forks into Blue Bridge. I'm fascinated as to how the traces of the line continue today as footpaths or redways!