Stewkley church is one of the most complete and remarkable Norman churches in the whole of England.

Unlike many other churches, it has retained its original layout and small Norman windows, and although it was restored in Victorian times, they carried out the work with a light and sympathetic touch, even removing some dubious earlier additions.

The result is a church that looks very much as it did when it was first built, in the late 12th Century. 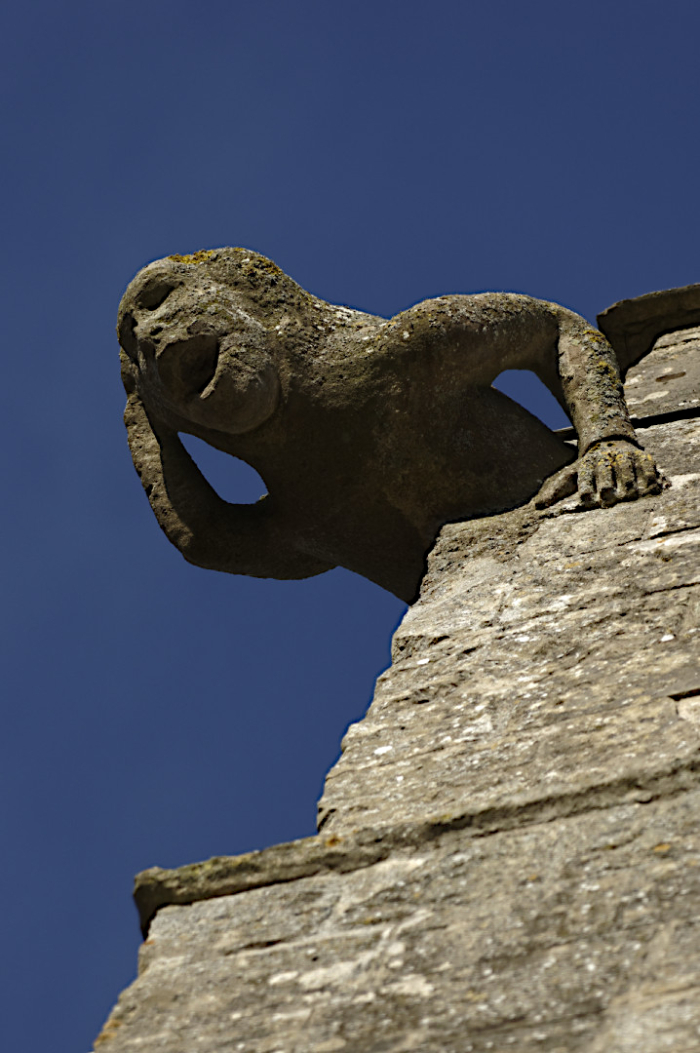 This is one of eight carved figures at the top of the church tower. I don’t want to call them gargoyles because they contain no water spouts (the word comes from the French “gargouille”, meaning “to gargle”) .

But I hesitate to call them grotesques, the other term, as half of them represent the four evangelists, saints Matthew, Mark, Luke, and John.

This carving might be a portrait of a local; it was often the case. 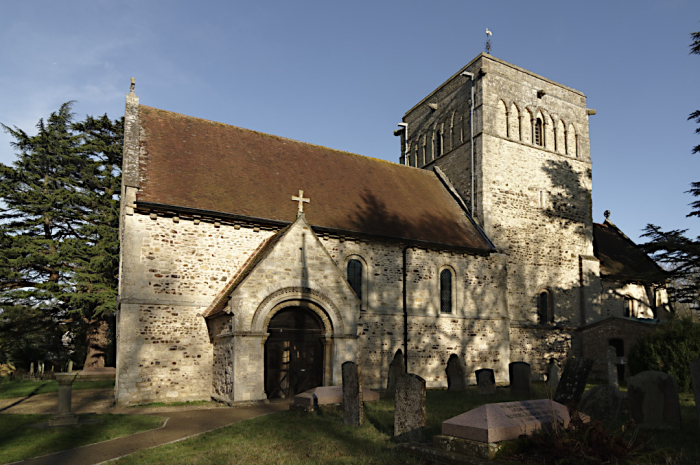 The massive shape of the tower, the round topped window arches, and the blind arcade of overlapping arches around the top of the tower show us right away that this is a late Norman church. If you were not too sure, another clue is the chevron (or zig zag) pattern around every arch.

There have been some changes. A parapet was added to the top of the tower in the 14th Century, with a pinnacle on each corner. Perhaps it was at the same time that a short narrow spire was added.

I’ve seen engravings of this version of the church, and it just looks odd. The engravings also show how the roofs had been changed in 1684 to ones with a very shallow pitch and the end walls made to shallower points, though still higher than the new roofs.

When the church was completely restored in 1862 the steeple was removed, the roofs restored to their original height and pitch, and the brick buttresses on the chancel were replaced with stone ones.

In 1867 the present porch was built, designed to unobtrusively match the original building. It replaces one built in the early years of the 18th Century. Inside the porch, look out for the cat’s head on the base of the original Norman door arch.

The vestry was added in 1910, joined to the church by a short passage so that the original fabric of the building was changed as little as possible.

The pinnacles became unsafe and were removed in 1964. The parapet was much lowered, probably at the same time. Apart from the porch and vestry, the church had nearly changed back to its original appearance, though it is very likely the roofs were originally thatched. 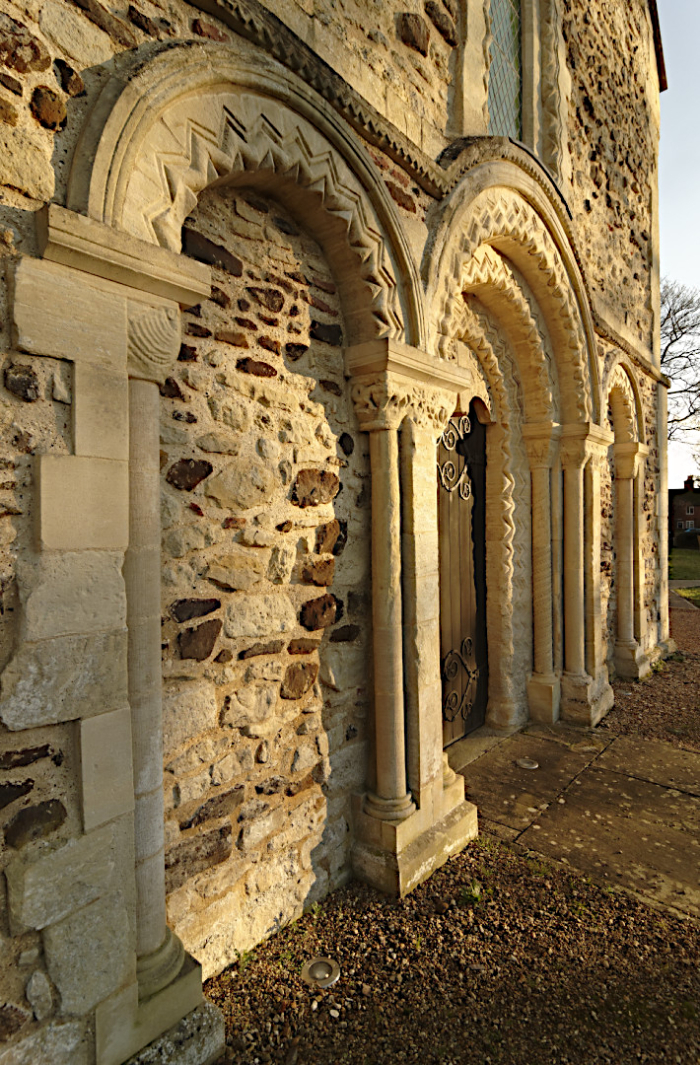 The West front faces into the prevailing wind, so it has suffered more weathering than other parts of the church. You can see where some of the stonework was replaced in 1975.

The chevron pattern around the two blind arches and in concentric arches around the door are typical late Norman work. The tympanum, under the door arch but above the door, has a pair of Nordic dragons. A chevron string course above the arches goes all round the building. 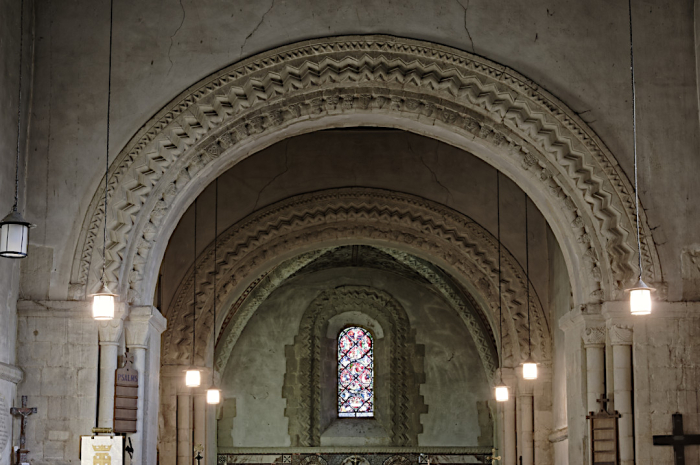 Inside, the original layout is unchanged. These two arches support the enormous weight of the tower. Between them is the chancel, in the base of the tower.

You can see cracks above both arches, but I think they’ve been there a long time. There are 37 beak head carvings on the nearest arch alone. Beyond is the sanctuary. 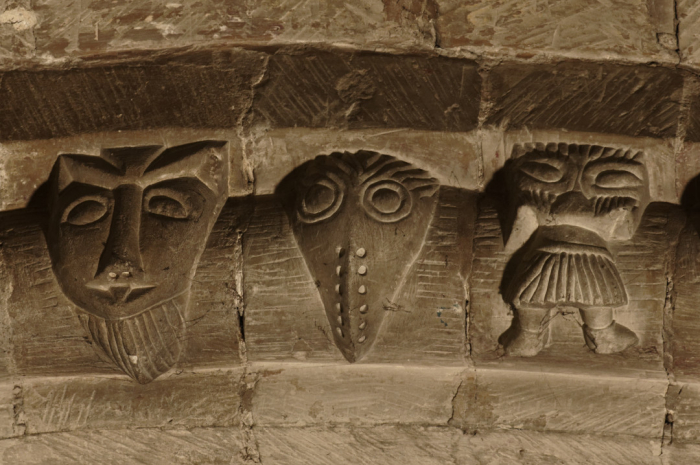 These beak head carvings (many are faces with beaks) were carved one at a time at ground level; each one is on a separate stone. Untold hours went into the decoration of this church. 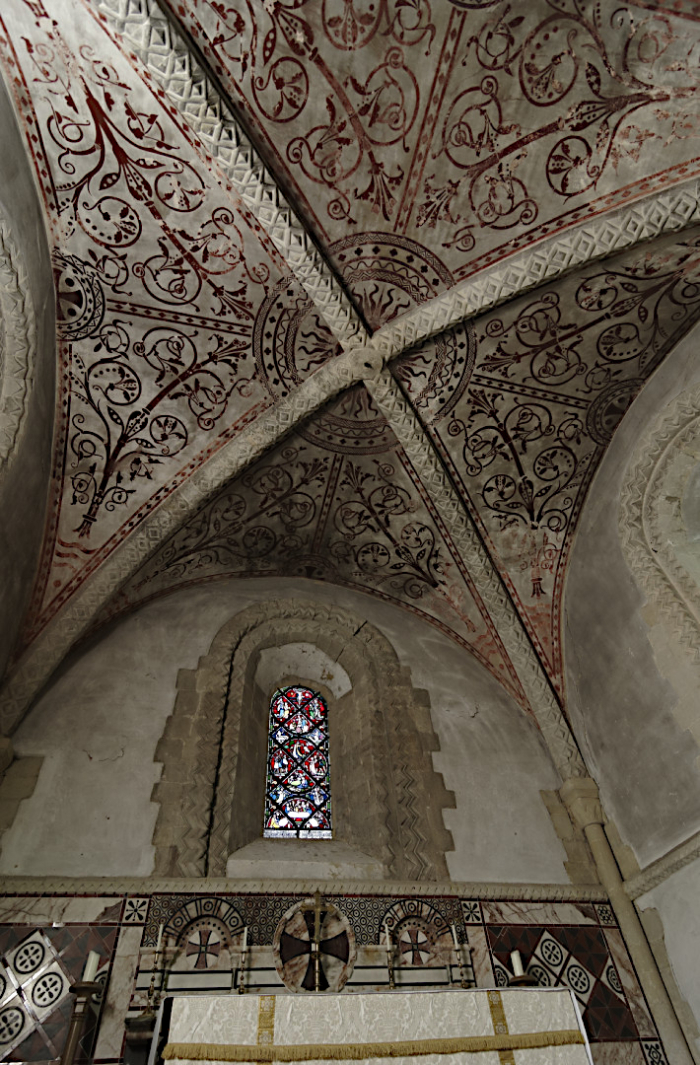 In the 18th Century, the East wall of the sanctuary was found to be leaning dangerously outwards, and buttresses were installed; the East wall is in the lower half of this photo.

It didn’t solve the problem. The original stone vaulting was removed in the 1862 restoration to reduce the weight that was forcing the wall out, and replaced with a much lighter brick vault. New buttresses were installed, the third set.

The original Norman ribs were retained, and the new vault decorated with a painted design. The remedial work seems to be working well. 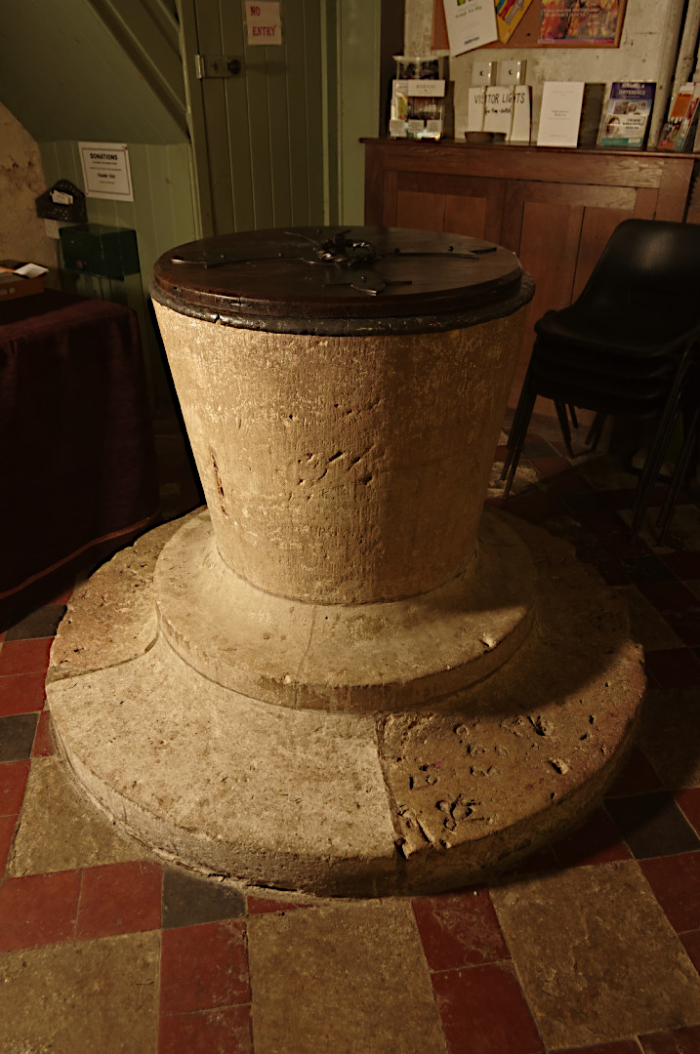 Although this is the original font, it is remarkably plain compared to the rest of the church. But it does have a restrained elegance.

The font is mounted on a later base, and in the base are the outlines of fossils from the Upper Jurassic period.

Visiting
Stewkley church is usually open every day. It’s a gem, changed remarkably little over the centuries. If you want to know more about it, there are guide books in the church, and the Stewkley Local history Group have published an 18 page booklet on it.

When you visit this or any other church, please help to preserve them by leaving a donation. To choose where to go, the book England’s Thousand Best Churches is well liked and praised. Of course, Stewkley church is in there.