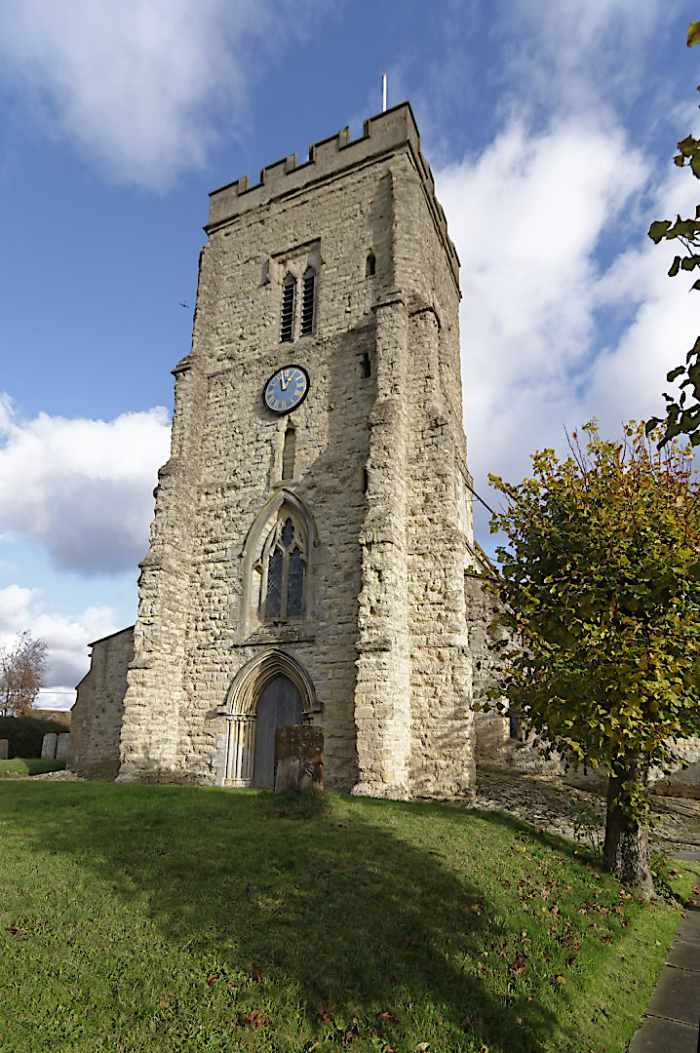 The church, at Whitchurch.

There’s more to the ancient village of Whitchurch than you might think, if you are just passing through. Amongst other things, hidden away are a secret World War 2 workshop, a castle, and a Tudor house that’s in disguise.

I parked on the High Street, facing towards Winslow, a little way North of the petrol station. I was right next to a post box. If you can’t find a spot there, try the side streets on the South (Aylesbury) end of the village.

Keep on the same side of the road and walk North towards the Winslow end of the High Street. There’s a long half timbered house on your left, just after the gentle left hand bend. This 16th Century house is now known as Winster Paddocks, but it was once a coaching inn called The Cock Inn, and from 1914 to 1989 It was a butcher’s shop.

Walk further along, and just past a modern phonebox is The Tudor House. We think of Tudor buildings as being timber framed, but this one is rendered all over and painted cream. But look again, and you’ll see there’s the typical jetty on the front and side of the house, where the first floor overhangs the ground floor.

Did you realise you’ve just walked past a mile stone? It’s under the parish noticeboard. Stand right next to it, and you are 45 miles from London. 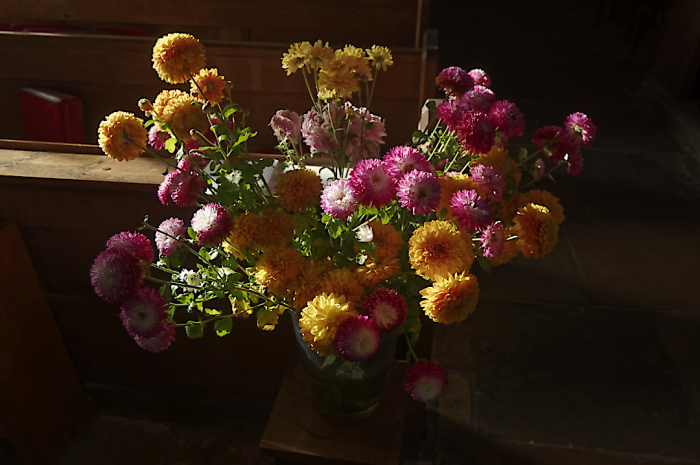 Behind the phone box is a footpath. It takes you down the hill. The footpath turns right several yards in, but straight in front of you, next to Spring Cottage, is Whittle Hole. It looks like a square pond, but it’s really a spring that used to be the main source of water in the village.

I couldn’t work out if the spring is part of Spring Cottage’s garden or not so I didn’t approach it too closely, but I’ve heard that tea made from the spring water is very nice.

Follow the footpath from where it turns right. Wet leaves made the path a little slippy when I was there on Monday. You’ll come to a small gate, with a sign asking you to keep to the path, as you are now in somebody’s garden.

Go through the gate. When you leave the garden you will be in a small field. In the far left corner there’s a couple of stiles which take you into a bigger field. Follow the path as it bends right and up the slope.

If you turn round, you can look across to Aylesbury and the vale, and the Chilterns beyond. It is rather muddy here, but we’ve had a lot of rain recently. Once you are through the gate, you’ll find the moat and bank of Bolobec castle are on your right. A spring fed the moat.

At the end of the path take the right fork, Castle Lane, and walk up to the public footpath gate. It lets you into the field with the castle motte, on your right.

There was once an impressive stone keep and walls here, but where did it all go? There’s plenty of evidence in the village that the stones were used as building materials. But the earthworks are in good condition and there are some buried foundations remaining.

I found some very inquisitive sheep there the day I visited. On the other side of Castle Lane is the castle bailey, now a private garden. 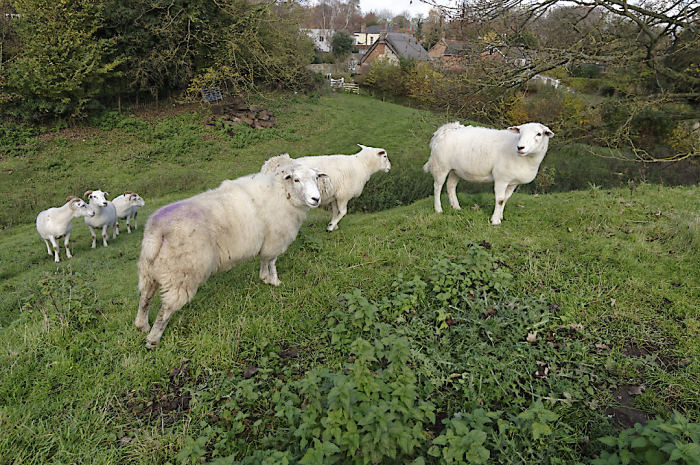 On the motte of Bolobec Castle.

Bolobec Castle was the largest of the 18 castles in Bucks, and named after it’s builder, Hugh de Bolebec. The six acre motte and bailey castle was built in 1147. Cromwell gets the blame for its destruction, though it was already abandoned and in poor condition well before the Civil War.

Keep going along Castle Lane and join the end of Market Hill. This was once the old main road through the village, perhaps until the Aylesbury to Buckingham turnpike (the main road) opened in 1721.

Cross the modern main road here, to walk up Church Headland Lane. The first building you come to is The Old House. It is believed to have been built in 1400 by monks from Woburn Abbey when they took over the parish church.

Further along the lane by the road sign that warns of “no turning area” take the short alley that leads into the churchyard.

Whitchurch was a Saxon village; ‘hwit cirice” means “white church”. Perhaps it was made of the pale local Portland limestone, like the present one. It’s believed that the Saxon church was on the same site as the modern church, and up above the low built Saxon houses it would have been a good landmark.

St John the Evangelist’s church dates from 1220, but the first rector in the village started before that, in 1189.

The church was open when I visited the village. Inside, the tower is massively built but not very tall; it was meant to have a spire. If you stand quietly in the bottom of the tower, you can hear the church clock. From the back of the church, look at the columns in the nave. Can you see that they all lean to the left?

Outside, there’s a big sundial on the tower. Walk out through the gate and down Church Lane. At the bottom, look back at the church. Imagine how fine it would have looked with a spire. 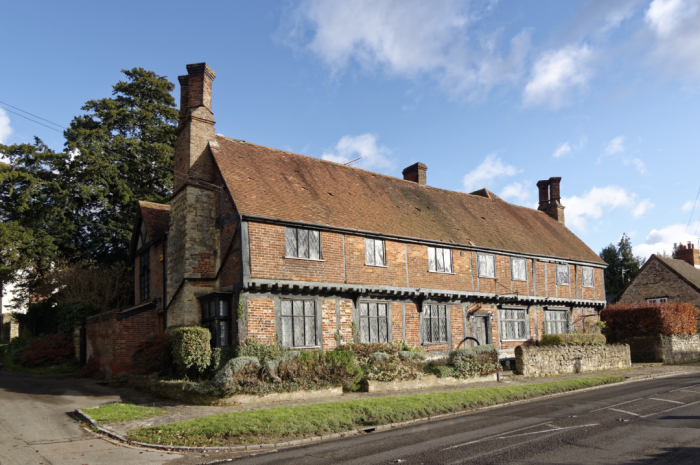 Now look right. This fine, red brick and tile wooden framed building is the Old court House. It was built in the 15th Century. (but some say 1360)

A large part of the middle of this house was a great open hall, until a floor was inserted in the 16th Century. Have a look at the old board and studded door and frame in the middle of the front face of the house.

Walk past the Old Court house and along the High Street. Just before Beech Tree Court is a quaint 17th Century house with some nice herringbone brickwork.

In comparison, the next few houses along the High Street seem quite modern, though the youngest must be over a century old. Cross the main road somewhere here, and walk past the petrol station up to the side road called Little London.

There’s an entrance in a brick wall on the other side of the junction with the main road, for a big black and white house called The Firs. This house was home to “Churchill’s Toyshop” during World War 2, but known officially as Ministry of Defence 1, MD1.

Only a dozen miles from Chequers and with a secure high brick wall all around, the house was perfect for MD1, who carried out weapons research and development. More than 250 staff developed over two dozen different sorts of weapons.

This was the last stop on my route, which is just under a mile and a half long. I’ve arranged the route so you only have to cross the main road twice. It’s a circular walk so you can start at any point.

The White Swan is across the road from The Firs if you need refreshments.

Love the photo of the old court house - well composed.

Perhaps I shouldn't give away all my secrets, but to take this I had to wait until there was both a gap in the clouds and a gap in the traffic; it's on the main road!

Welcome the info on the walk at Whitchurch as I am researching my family history, who came from Whitchurch back in 1550 and a possible link back to 1538, so I am planning a visit there once lockdown finishes.

Glad it was helpful. Researching your family history back to the mid 16th Century is pretty impressive; I think we know my family's history as far back as the early 18th Century.