A waxed wooden plug goes into the touch-hole.

It’s Noon on Monday, the 11th of November and half a dozen loud bangs echo across Fenny Stratford. St Martin’s church have fired their ceremonial cannon again.

The six small cannons are the Fenny Poppers. The poppers have have been fired on the 11th of November, St. Martin’s Day, since around 1740. I went to watch. At the far end of the graveyard off Manor Road, four men were preparing the poppers. 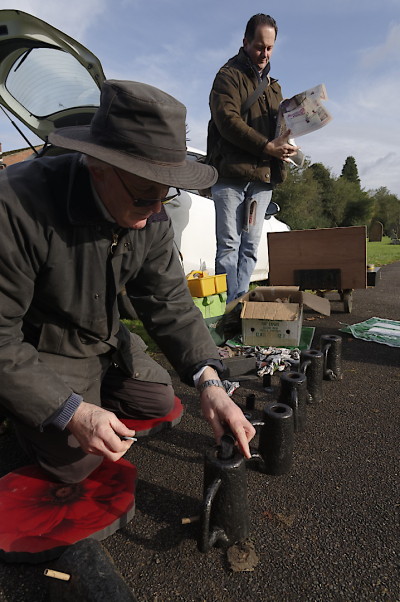 Just under an ounce of Pyrodex is poured into the cannon by Peter White.

Each one is shaped like a tankard, but they are made of gun metal with thick walls. There’s a touch-hole near the base for the fuse. Each popper is just seven inches long, but weighs 19 lbs.

Peter White of the church loaded them one at a time with just under an ounce of a gunpowder substitute, Pyrodex. It’s more stable than gunpowder, but like gunpowder it produces quite a lot of smoke when it goes off, as we will soon see.

Peter had already put a waxed wooden plug into the touch-hole to stop the Pyrodex from escaping. Next, screwed up newspaper is pushed into the bore and rammed down with a wooden rod and a hammer until the bore is nicely packed. 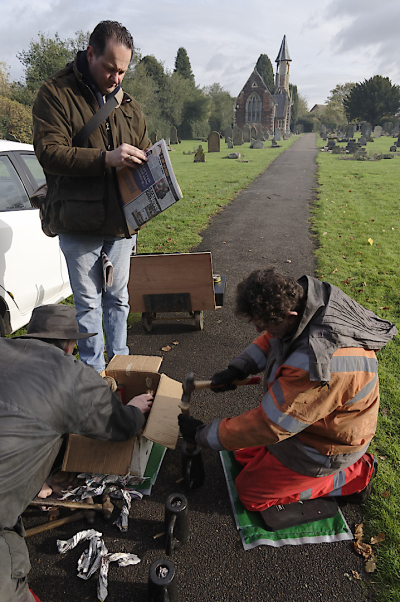 That's a mortuary chapel in the background. St Martin's church is about half a mile away.

While they work, the four men have a mock serious discussion about which newspapers are best for this job. The Telegraph or The Times? The Sun? Hard to say, but it takes a little while to ram all the paper in, and the audience is starting to arrive. Ramming the newspaper down into the popper.

Meanwhile, there’s a nice hot brazier on the other side of the hedge, in the Leon Recreation Ground. The curved over end of a long iron rod is heating up in the flames, and this hot end is what will set off the fuse on each popper.

The church men bring the poppers through to the recreation ground and set them in a widely spaced row, on their sides but with the bases in a little hole in the soil, the mouth point slightly up. There is a Y shaped rest to steady the iron rod behind each popper. A little Pyrodex is poured into the touch-hole.

Peter White removed the wooden plug from each one and poured some Pyrodex into the touch-hole. Everything is ready, with a couple of minutes to go. At Noon, Father Victor Bullock took the iron rod and placed it into the Y rest. He turned the rod and rolled the hot, curved end into the touch-hole.

The Pyrodex fuse ignited and burned with an orange flame, putting out dense white smoke. After about a second the popper fired with a crisp, loud bang and even more smoke. It jumped up with the recoil.

The poppers are fired in quick succession. The next ones were set off by the two church wardens. First Iola Samuels, then Nigel Benford. Peter White also fires one.

That’s it for now, but the poppers will also be fired again at 2pm and 4pm. Father Bullock always fires the first one at Noon, and the last one at four. Of course, there is no connection with Armistice day. During WW2, the poppers were not fired because of wartime regulations.

(Below) One second in the life of a popper. Father Bullock fires the first one of the day.
(Click to get the whole of each photo, enlarged)

This tradition was started by the 18th century author, antiquarian and MP Browne Willis. We don’t know when the poppers were first fired, but it was probably around 1740. They’ve been fired at quite a few different places in Fenny Stratford since then.

Pacey’s the ironmongers in Aylesbury street supplied the gunpowder for many years. In 1867 the poppers were being fired in Bull Close, a paddock behind the Bull pub on Watling Street.

One of them exploded. Part of the popper was blown 400 feet across Fenny Stratford into the roof of the Bull and Butcher pub on Aylesbury Street, and did a huge amount of damage.

One of the surviving poppers was sent to the Eagle Foundry in Northampton. It was used as a pattern and a new set were made, which have been used ever since. A nice, noisy, English tradition.