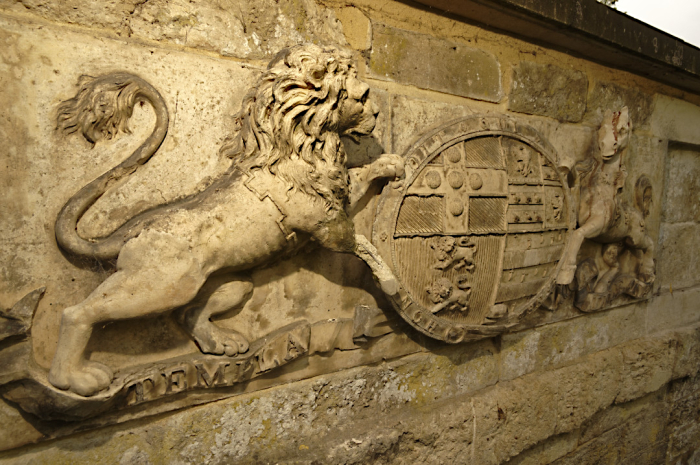 The coat of arms on London Road Bridge is made from Coade stone, a ceramic material.

You might think that you know Buckingham very well, but here’s a few things you just might not know and can find on a walk that's just a mile and a half long.

Park at Cornwall’s Meadow. It has plenty of spaces and costs just 50p for three hours. It’s on the South side of the Stratford Road end of the High Street. From there, take the footpath through the woods at the opposite end from where you drove in. When you cross the footbridge over the River Great Ouse, turn right.

Walk past the skate park and playground, and you’ll find yourself at the end of London Road Bridge.

Built mostly at the expense of the Marquis of Buckingham, the bridge has his coat of arms in the centre of the North side, above the river arch. You might have seen it if you’ve walked across the footbridge that runs close alongside; it’s close enough to touch.

But you may not know that the Buckingham Swan is on the South side; it’s difficult to see and I couldn’t get a good look at when I visited Buckingham last week. 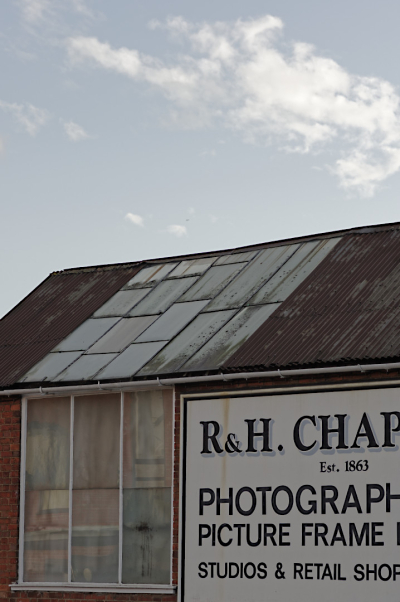 North light studio from the dawn of photography.

R & H Chapman, photographers (now closed) lies at the far end of the bridge, in the angle between Bridge Street and Well Street. If you look up at the rear roof you can see a huge skylight with an almost as big window just below it. This was the studio.

When the Chapmans began in 1863, there were no artificial lights strong enough for photography. Studios like this were built to take advantage of the soft and even lighting the North sky gave, to light their subjects.

The building is said to have been shortened to allow for the creation of Bridge Street.

Well Street once went right up to the end of the High Street, where the Old Town Hall now stands. This changed when the London Road Bridge was built in 1805 and the length of Well Street closest to the High Street became part of Bridge Street.

Cross the road and walk up Well Street. Not far along there’s a turn to your left; Ford Street, where the old six arched Sheriff’s bridge once crossed the Great Ouse.

It was the way into town until the London Road Bridge was built. The old bridge had been in very poor condition and it’s long gone, but there’s a modern footbridge.

At some time in the 1970s a coach got stuck in the ford; I think I remember seeing the photo in the Buckingham Advertiser.

I also remember that Cannon Corner, up by the town hall, had a cannon set into the pavement as a bollard. Every so often a lorry would get stuck on it, and there would be another picture in the paper. The cannon is now at North End Square, at the other end of the High Street. 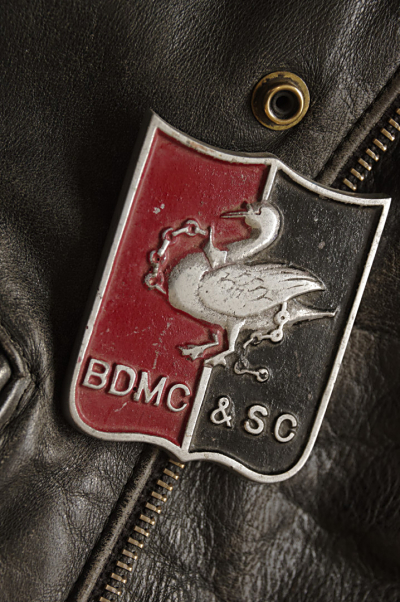 The bike and scooter club's badge is the county swan.

In the ‘60s the Woolpack pub on the corner of Well Street and Ford Street was home to the Buckingham and District Motorcycle and Scooter Club. It wasn’t true that back then motorcycle and scooter riders were all mortal enemies. I have one of their cast machine badges, found by a retiring landlord when he moved out of the pub.

At the far end of Well Street, turn left into Church Street. The red brick house on the corner has a Victorian post box. 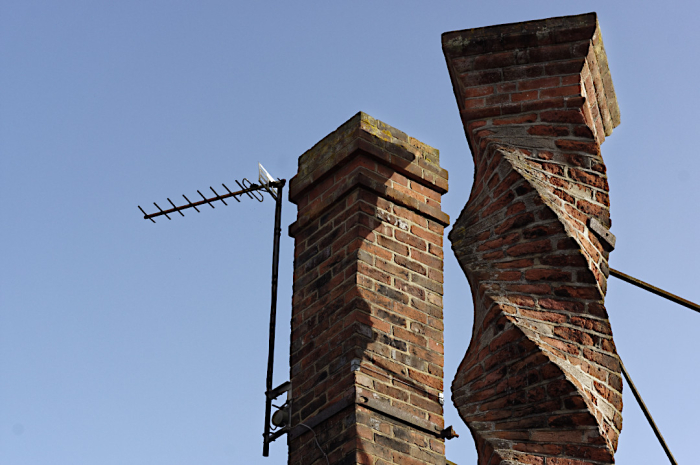 The twisted chimney is on the end of a half timbered manor house.

Walk up Church Street. Just as you reach the old churchyard the house with the famous twisted chimney is on your left. It’s a half timbered manor house that’s probably early 16th Century. In about August 1568 Queen Elizabeth I dined here “in great splendour” 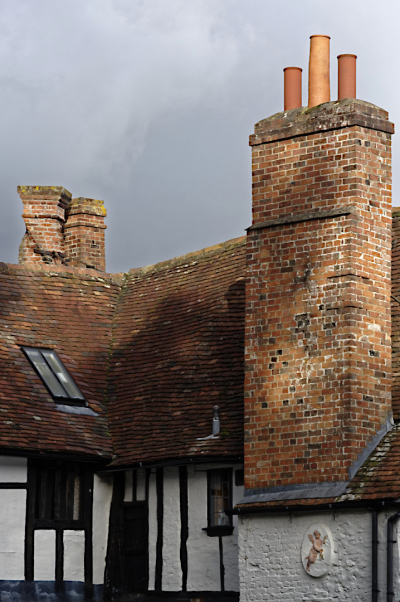 Walk into the old churchyard and look back. Can you see the cherub on the manor house? It’s St. Rumbold, the baby saint of Buckingham. There’s a plaque in the churchyard to show where he was buried, in the old church.

The original medieval church stood in the churchyard until 1776, when the spire fell for the second time, and on to the church. The new church was built on Castle Hill, and can be seen from miles away.

Walk back along Church Street, and at the end of Well Street have a look down the narrow St Rumbold’s lane. On the corner of one of the houses is a nice piece of pre-reformation quatrefoil carving. It looks like it originally came from some other building. The house is about halfway down, on the right. 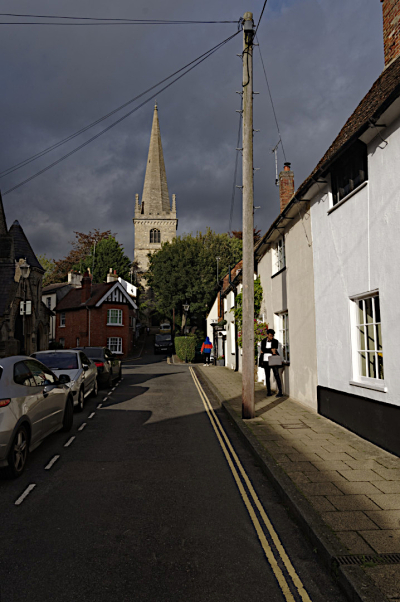 Church Street and the church of St. Peter and St. Paul.

Go up the hill to the new church. Consecrated in 1780, it was built using stone from the old one. Remains of the castle have been found under the ground there. Walk down the slope on the other side of the church, and you are on Castle Street. Elm Street is on your right and stops just short of Well Street. 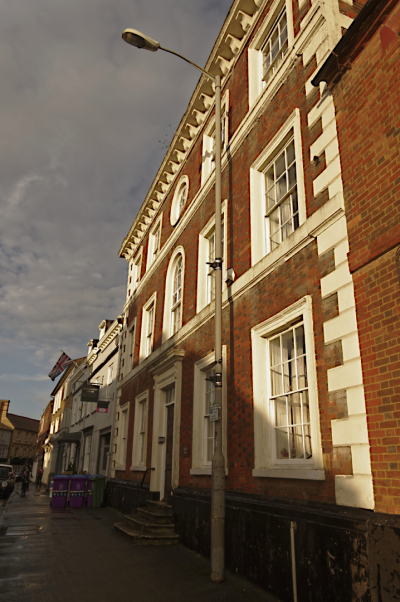 A little way along Castle Street, on the right, is the rather fine Georgian house, Trolly Hall. Trolly was originally trollop, as the house was built as a high class brothel.

Carry on to the end of Castle Street. You are now at Cannon Corner where the lorries used to get stuck. From here, you can either retrace your steps by turning right and walking down the hill and across the bridge, or walk forwards along the Market Square and the High Street.

The Old Gaol, built to look like a castle, is a museum and tourist information centre. It’s open 10 am to 4 pm, Monday to Saturday. Just on the right there, you can walk through an archway, through the Meadow Shopping Centre, and back to the car park. There’s far more to Buckingham than I can write about here. What are your favourite parts of the town?

Nice article - I spent a lot of my childhood in Buckingham and thought I had seen most of the features of the town - never seen the twisty chimney before!

I thought the twisted chimney was one of the most well known features. Just goes to show; I should assume nothing, check everything!

i believe the cannon from Cannon corner is a Russian one captured during the Crimean war.
the castle, which stood on Castle hill was one of two originaly built to deny the Vikings use of the ford, now known as ford street, where, in summer, it is possible to cross the river Great Ouse on foot. the other was built on top of the opposing hill alongside Bourton road.

William
The cannon coming from the Crimean war does ring a very faint bell with me. I know lorries used to get stuck on it from time to time.

I didn't know about the castle by Bourton Road, but it would also be able to control traffic from the river crossing at Thornborough, where the Romans built a ford. It is just next to the (obviously later) medieval bridge.

I wrote about that river crossing here: https://www.northbuckswanderer.com/2019/12/the-two-thousand-year-old-river-crossing.html