(This is the second post about bluebell woods in the North Bucks Wanderer’s stomping ground. The first post is here.)

It was Saint George’s Day. I had already visited two woods that day, this was the third and last.

Hollington Wood is privately owned, and although there are no footpaths through the wood, there are two permissive paths that are nearly always open. The wood is a couple of miles South of Olney, not far from the A509. It has a very nice display of bluebells this year, including at least one albino example.

I drove up the back road to Olney, then came out South from the town and back towards Milton Keynes. I turned left on to the Newport Road, about 250 yards past the Newton Blossomville turn. The Newport Road was the old main road, now bypassed. 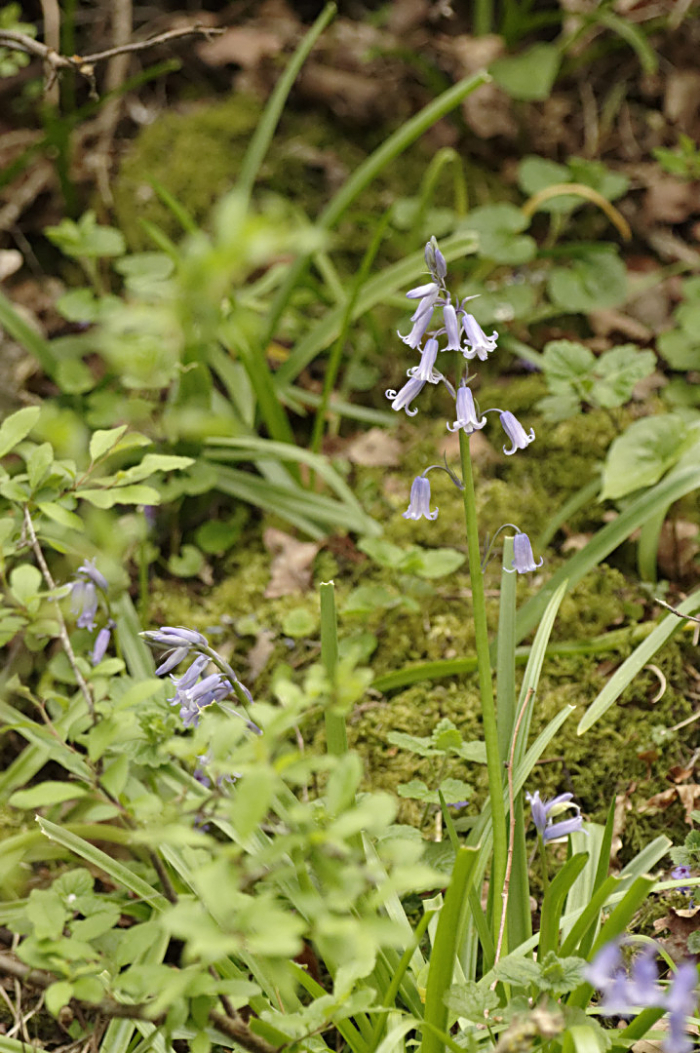 By the permissive path.

At the end of Newport Road I parked the car and took the footpath East. I followed the hedge. It was to my left. The footpath sign is small and badly faded. The sun was shining. It was a warm day.

At the end of the first field I took the path as it dived left through the hedge then I turned right and walked along the field edge. The hedge was now on my right. There were crops in the field.

As I reached the corner of the woods, I saw a bridge over the ditch to my right that carries another footpath away and along the Western edge of the wood. But I carried straight on, the woods close on my right. I could see carpets of bluebells amongst the trees. 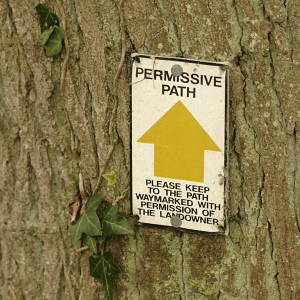 Watch for the signs.

At the end of the field the footpath carried on through the gap. But I turned right over another ditch bridge, and I was in the wood, on the permissive path. I didn’t realise it at the time, but the first part of the path had the best display.

This is where I saw the albino flower surrounded by the usual blue ones, a few yards into the wood on my right. But when I looked at my photos at home, I realised there were two albino bluebells, next to each other. 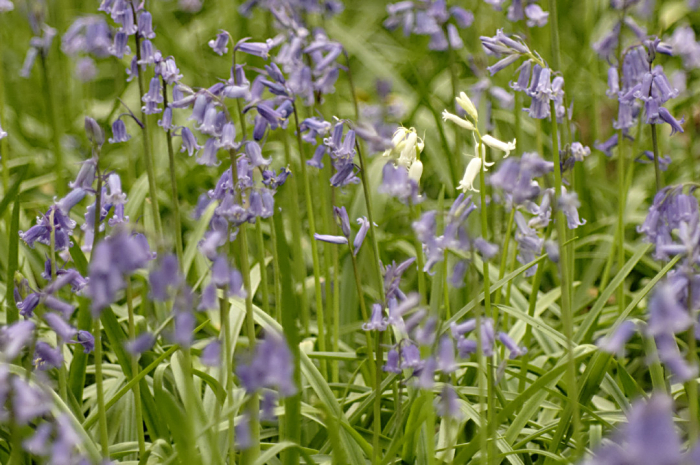 I walked up the hill but I could see hardly any bluebells. Further up the slope the bluebells were back, on the shallow bank on each side of the path.

At the end of the track there’s a steel gate onto a concrete road. Through the gate I turned right and walked up the road, (it’s also a public footpath) along the wood’s edge. At the corner of the wood the footpath follows the edge of the wood up to the next corner, and when I crossed the bridge over the ditch I turned left and retraced my steps back to the car. I had walked about a mile and a half.

The rest of the wood isn’t open to the public (stay on the permissive path!) except for a few open days each year. It will next be open on Sunday 5th and Monday 6th of May, for their Bluebell Days. It’s already a good display.

About Bluebells
The native English Bluebell is ideally suited to ancient woodlands, where the soil is undisturbed and the trees cut out the sunlight in the summer, preventing other plants from taking hold.

Ancient woodlands are woods that have existed continuously since 1600 AD, and the presence of bluebells is a good indicator that the wood is indeed ancient; these flowers are very sensitive to the right conditions. 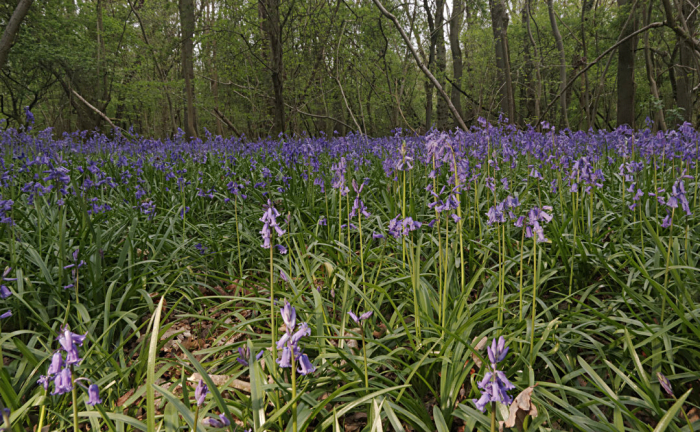 Hollington Wood is an ancient woodland.

Britain has about half of the world’s bluebells. They are also found, but not so often, in Ireland, France and Belgium, the Netherlands, and Spain and Portugal.

There’s a bit of a problem in Britain with Spanish bluebells. They have escaped from gardens over the years and can hybridise with the English flower.

It isn’t hard to tell them apart:

The English plant’s flowers are suspended on one side of a stem that bends gracefully under the weight of the flowers. Leaves are about 10mm, 0.4” wide. The pollen is pale cream.

The Spanish flower has an upright stem and the paler flowers point in all directions. The pollen is dark blue. The leaves are twice as wide as the English type.

The hybridised version shows a mixture of traits. The stem curves a little, the flowers are pale blue, so is the pollen. 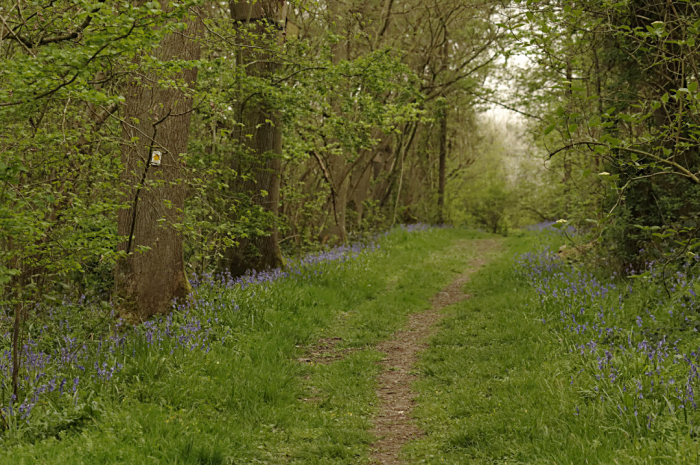 It’s illegal to dig up bluebells in the UK, but they are easily (and legally) available to buy from plant specialists. Please don’t buy the Spanish ones, but do buy some English bluebells. You can buy them “In-the-green” now, ready to plant straight away.

If you buy dry bulbs you may find that they remain dormant for as much as three years. In-the-green bulbs will come up next spring. They will spread into large clumps over the years.