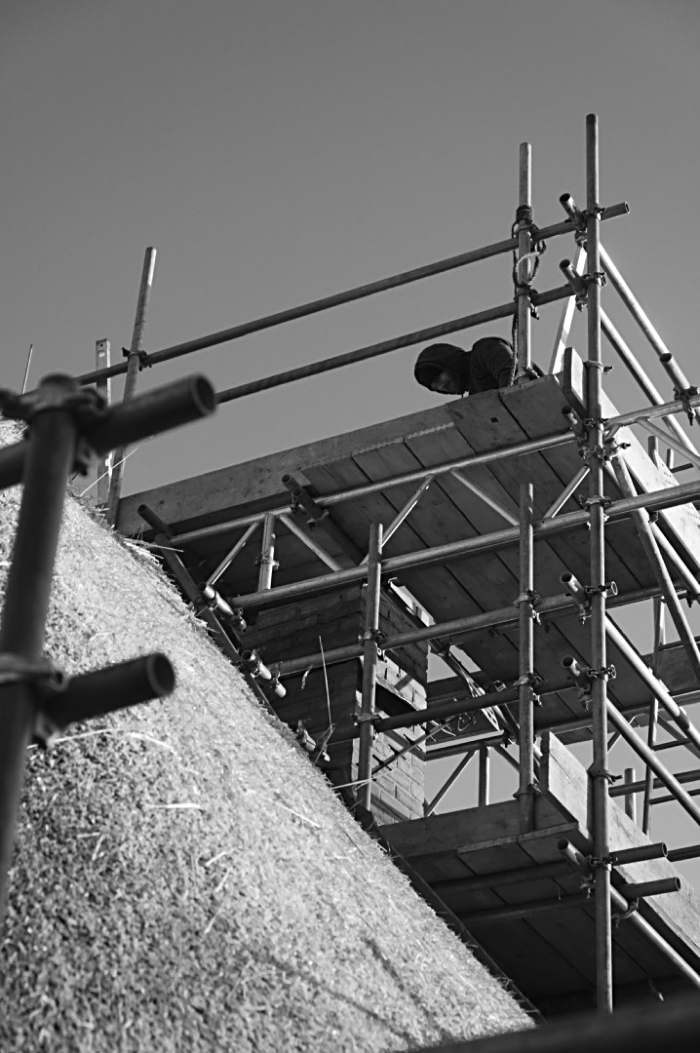 I drove through Quainton on the way to see my dad last week, passing East to West through the village. When I got to Lower Street I saw the thatchers were at work on Orchard Cottage.

I had a few minutes so I stopped to take photos, and I talked to Dave, one of the thatchers. He was trimming the new thatch on the gable end of the house next to the road. 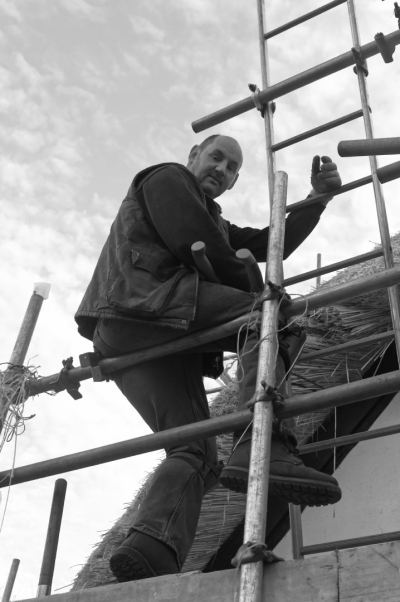 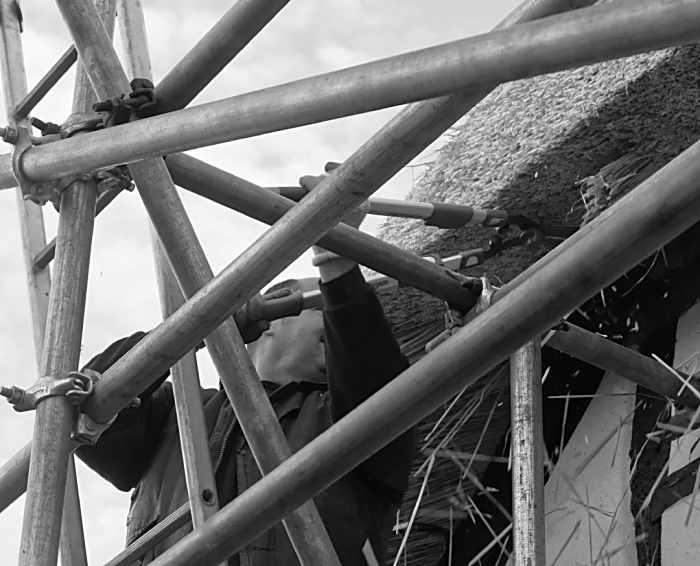 Dave told me that the job had so far taken three men three weeks, and it would be a couple more weeks of work to finish the job. The chimney stack was also being rebuilt.

On site were Dave, the other Dave, and Harry. Neil Painting, the boss, wasn’t on site when I stopped by. 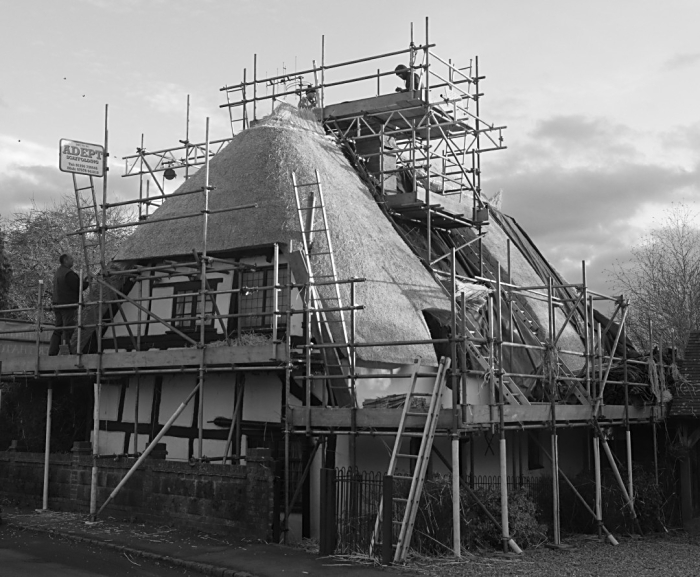 Dave said that a passerby had told him that she had lived in the 17th century cottage when it was two separate homes.

When I got to my dad’s and told him what I had been doing, (he grew up in Quainton) he said that my aunt Doris (his sister) and my uncle Den had once lived there years ago, when the cottage had been split into two.

I wondered if the passerby had been my aunt Doris, so I phoned her up to ask. 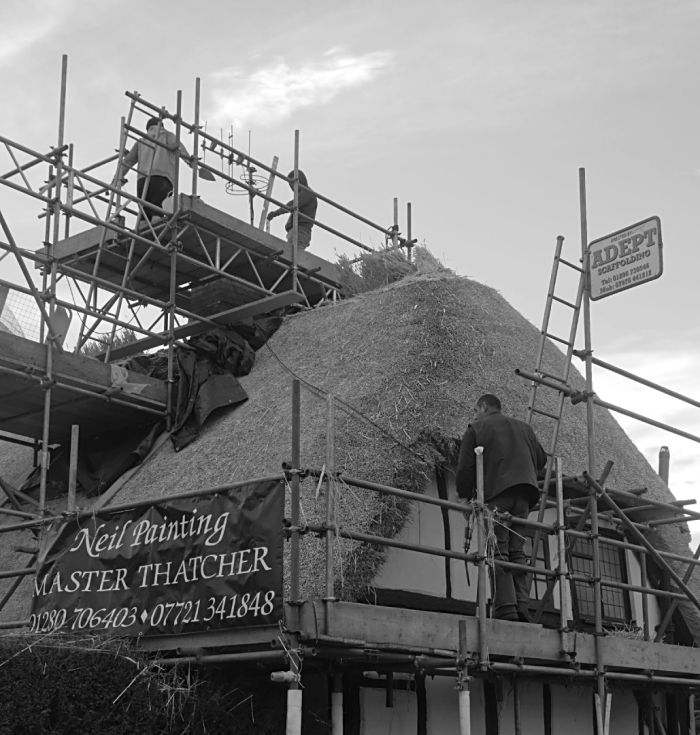 Yes, it had been Doris who talked with Dave, and she told me about when she had lived there with my uncle Den.

After Doris and Den had been married for about six months, they went to live in the cottage, in the half of the building furthest from the road. It was 1955.

The kitchen, she told me, was under the stairs. the cooker at one end, and the sink at the other. So small was the kitchen that if you took a saucepan off the cooker and turned round on the spot, you would be holding the pan over the sink!

They had a tin bath. You may not know what that means, but I remember the tin bath we had when I was growing up in the 1960s; it lived on a nail when not in use. A tin bath has to be filled from a jug and emptied the same way, every time it’s used.

The toilet was down the garden. 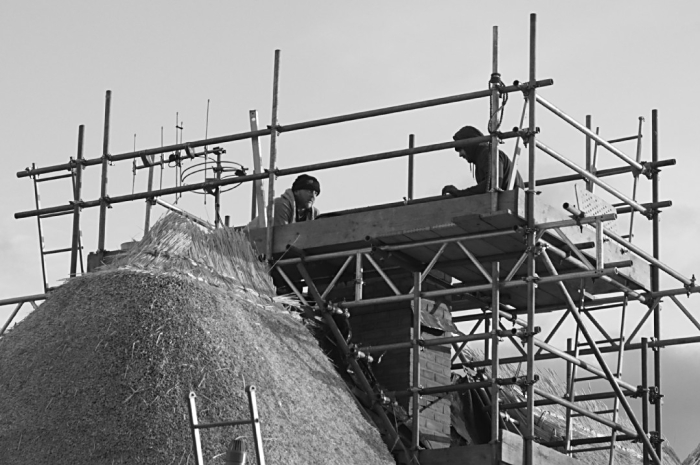 Doris and Den had an open range for heating, and burned wood and coal on it. They had a wood  fuel barn at the bottom end of the cottage and the man who lived in the other half of the building had a wood barn for his fuel, too.

in 1957 or 1958 the council approached Doris and Den out of the blue and offered them a council house in the village.

They accepted, and my aunt Doris still lives in Quainton. Not long after they moved out, the two cottages were made into one.

When I looked at an old map from around 1892-1914, it showed that Orchard Cottage had been divided into three. It must have been a bit cramped! As one dwelling the cottage is about the size of a decent three bed house. 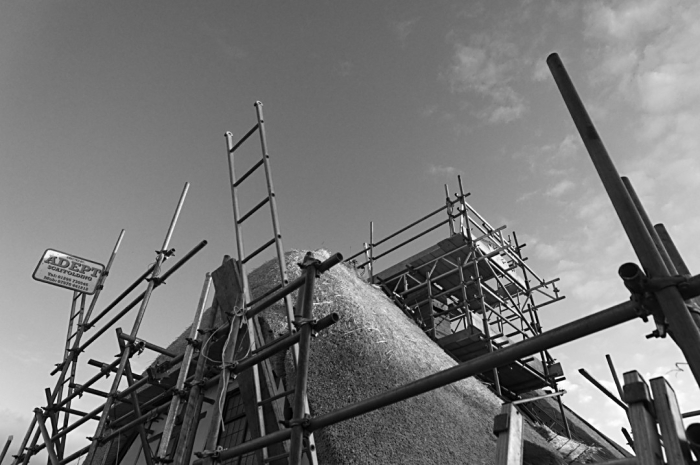