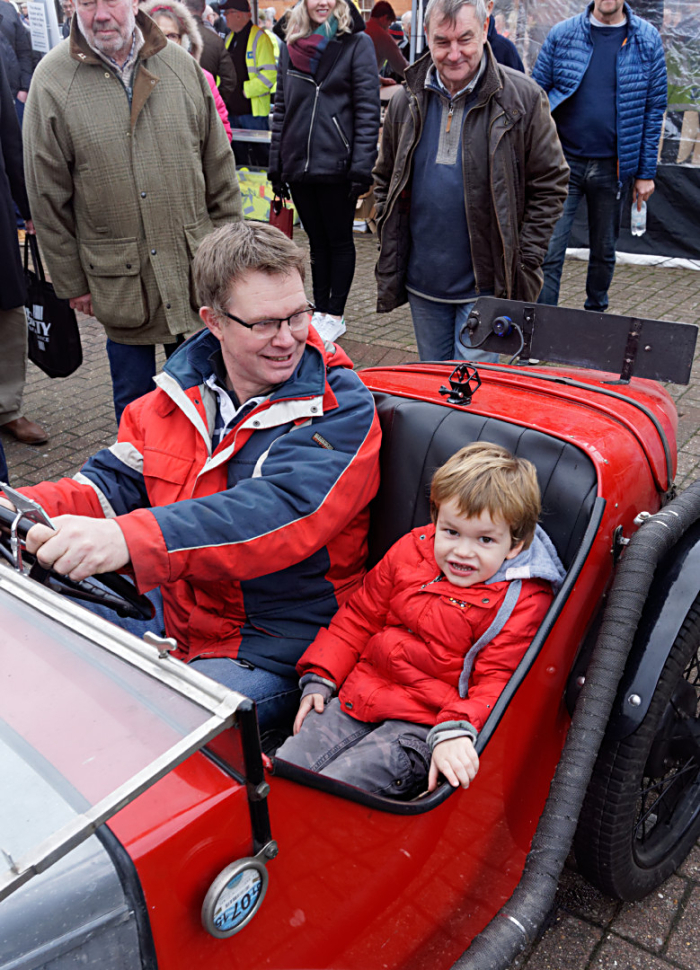 On New Year’s Day  I woke up mid morning, and hurriedly ate breakfast, and got washed and dressed. It was a fair day for this time of year, and I wanted to get out on the bike.

My first stop was at Stony Stratford for the 10th Vintage Car and Motorcycle Show; free to enter, but donations welcome to Willen Hospice. Last year the show raised £4,850 for the Hospice. I’m mostly there for the bikes, though I found one or two other vehicles I liked. 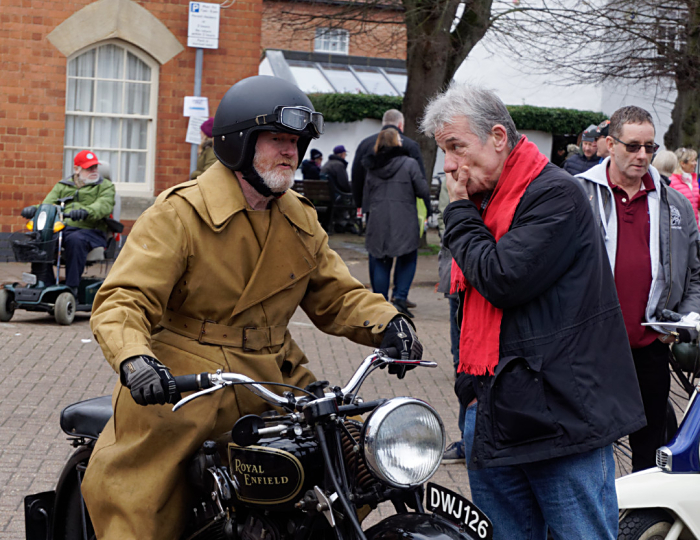 When I left, I followed up the High Street what was possibly the oldest vehicle there, an 1896 Leon Bollée tricar. This two wheels at the front and one at the back tricycle was piloted by Jacqueline Bickerstaff, who I’ve recognised before at the Stony Stratford shows from my British Motorcyclist Federation days. The tricar is not a quick vehicle, but that's no surprise as it was first on the road when Queen Victoria was on the throne. I soon overtook her and left the town. 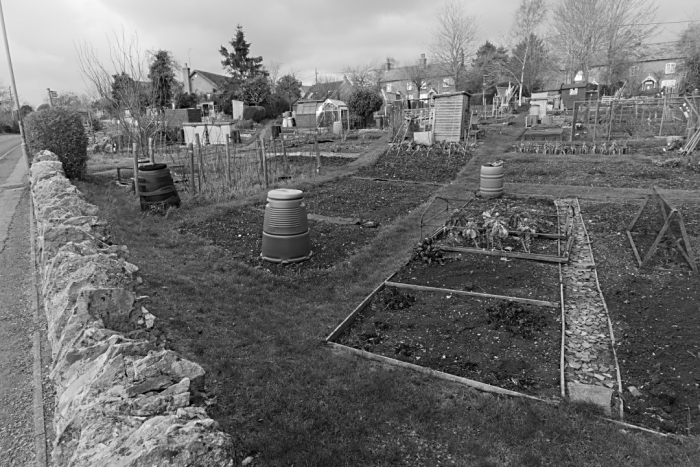 I cut across country on dry back roads until I found myself at Stoke Goldington, next to the allotments. It wasn’t too cold. There was a man working on his allotment, perhaps starting the year as he meant to go on. I introduced myself and he told me his name was Clive. I took a few posed photographs, then, as I didn’t want to take up his time, asked if I could take more photos while he carried on working.

Clive was pruning back his Autumn raspberries and weeding. He showed me his range of different garlics, and under a cover, the allotment’s well, very handy for watering. We chatted as we both worked. 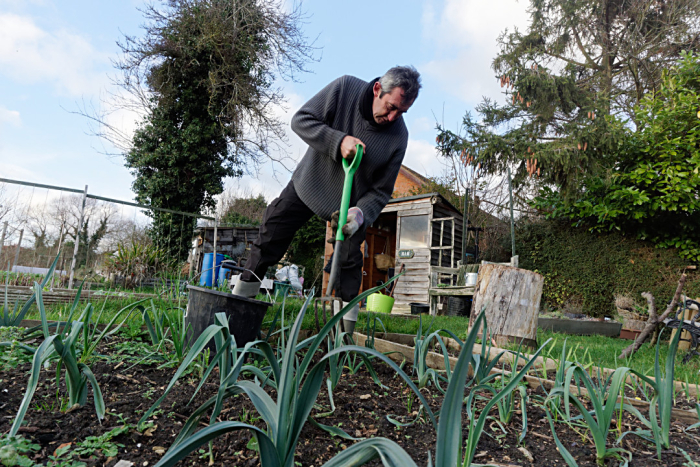 I felt I’d done what I needed to with the camera, so I left Clive to his allotment and headed for Olney, via Weston Underwood. In Olney I saw a woman doing something with a brass name plate on a building and a screwdriver. It was only a glimpse, but it seemed worth a photo so I parked up in the Market Place and walked back towards where I’d seen her, at the end of Weston Road where it joins the High Street South.

But first I saw something was going on in the barber’s shop by the junction. The shop is being refurbished, but will be reopening again soon. (See the photo) I took a few photos then crossed the High Street South and walked up Weston Road. 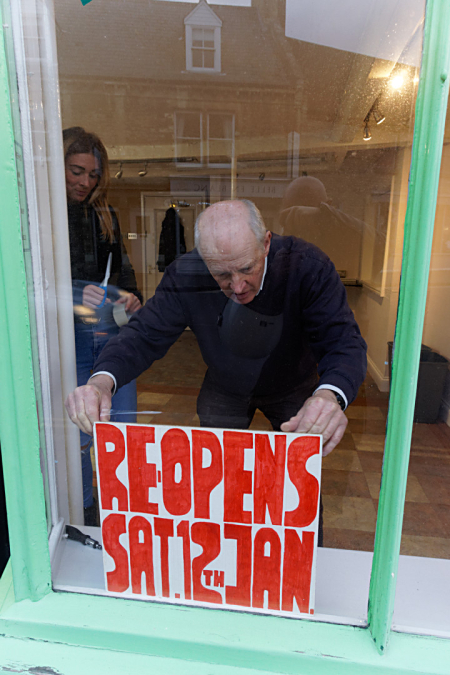 The woman had gone; perhaps she was removing the brass plate and was just finishing the job when I rode past. I couldn’t work out where I had seen her. Oh well. I walked back to the bike at sat next to it, on the bench by the war memorial and waited for something to happen.

I idly took a few photos but nothing blog worthy, and was framing up another shot and heard, “Is that yours?” and I took the photo and looked round to see a man with a dog. He was asking me about my bike.

This was Marcus and his dog Cody. Marcus told me that Cody came from Romania, and I realised that he was a rescue dog. My Dad has had rescue dogs for years, and the latest two were also rescue dogs from Romania. We talked about motorcycles for a while, and I took some posed photos of them both. 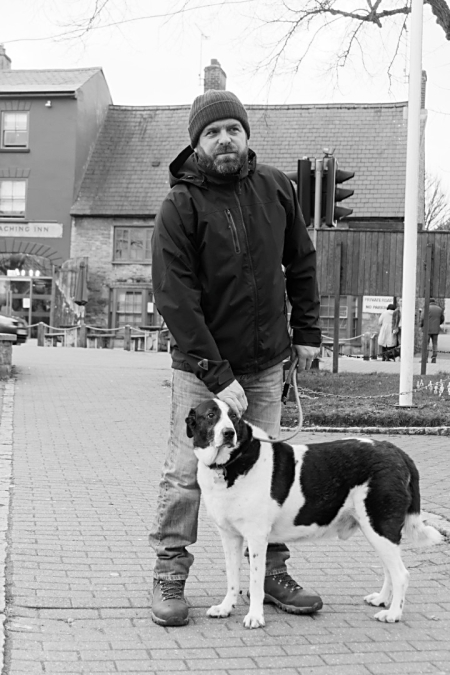 It was time for us all to go. Marcus and Cody went on with their walk. I put the camera away, pulled on my helmet and gloves, and rode off. I knew where I could get a cup of tea, at my brother’s house. It was mid afternoon and now I really needed one.