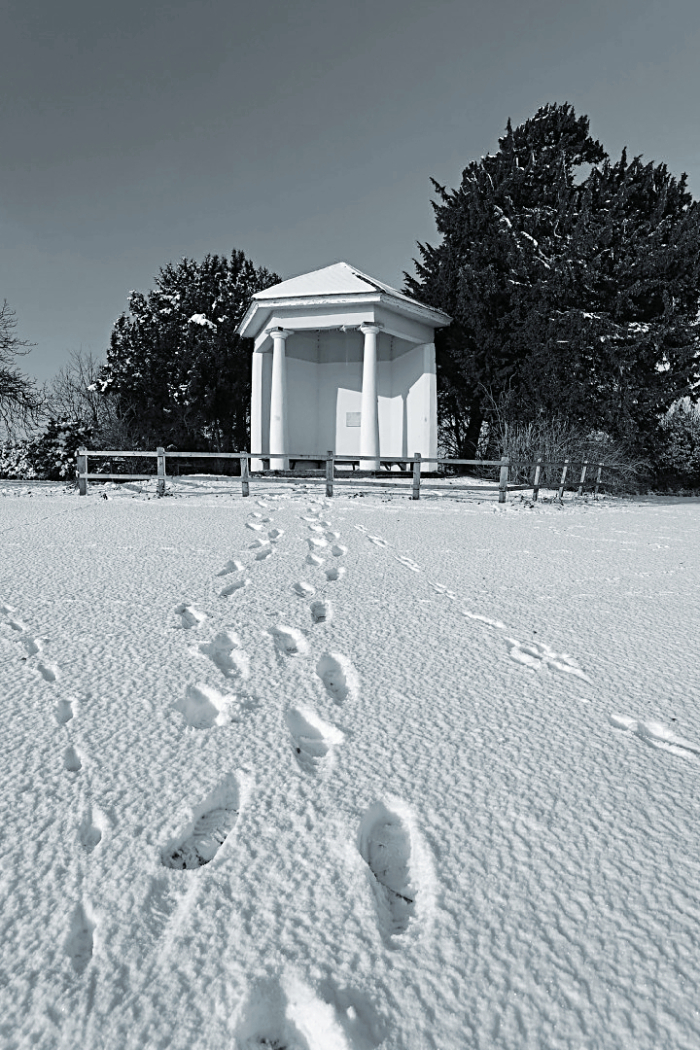 Whenever I head West out of Olney towards Stoke Goldington, I know that the road passes through the stone posts of the gateway at Weston Underwood. Set in a long, high stone wall, they once held iron gates.

Another set of gates were further up, perhaps at the small crossroads where the remains of the 15th century cross still sits. The gates were closed at night, as the road between was formerly a private one.

To the left, and South of the private road as you come from Olney was the old Weston House, (demolished in 1827) and to the right was Weston Park, extending half a mile North.

The public road passed behind Weston house. Perhaps Cross Lane, that heads roughly South from the crossroads, is all that’s left of it.

Opposite Cross Lane is Wood Lane. It takes us up the side of what was once Weston Park, and along the far edge of the park, to Cowper’s Alcove. This mid 18th Century folly is where the poet William Cowper used to sit and compose much of his poetry during his walks from Olney, then later from Western Underwood.

Cowper (‘pronounced Cooper’) rented and lived in Orchard Side in Olney from 1783 to 1786. Born in 1731, he was about 52 when he came to live in Olney. Orchard Side is now The Cowper and Newton Museum, on the Market Place in Olney. But who was Newton?

Born in 1725, John Newton was a close friend of William Cowper, and was a frequent visitor to Orchard Side. He had been a slave in West Africa for eighteen months from 1745 to 1748, then was involved in the slave trade as a first mate and then captain upon slave ships until 1754 when he was 29.

In 1788, he broke his long silence about slavery when he published a pamphlet called Thoughts Upon the African Slave Trade. It described the conditions aboard slave ships and in the slave trade:

“If I attempt, after what has been done, to throw my mite into the public stock of information, it is less from an apprehension that my interference is necessary, than from a conviction, that silence, at such a time, and on such an occasion, would, in me, be criminal.

If my testimony should not be necessary, or serviceable, yet, perhaps, I am bound, in conscience, to take shame to myself by a public confession, which, however sincere, comes too late to prevent, or repair, the misery and mischief to which I have, formerly, been accessory.”

Copies were sent to every MP and the pamphlet sold very well. Newton became an abolitionist  and an ally of William Wilberforce, MP, the man who lead the Parliamentary campaign to abolish the African slave trade.

John Newton lived to see the passing of the Slave Trade Act 1807, but died later that year. 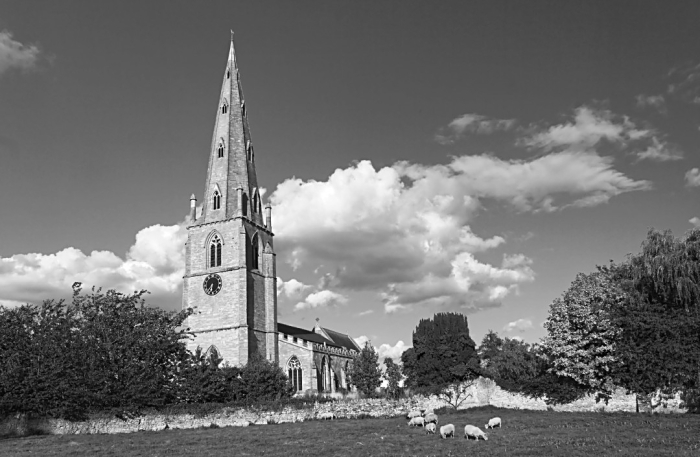 The church of St. Peter and St. Paul, Olney.

Between 1764 and 1779 he was the curate of Olney and wrote the well known hymn, Faith’s Review and Expectations. If you’ve never heard of it, that’s the original title.

You probably know it better as Amazing Grace.

It’s believed that this hymn was written in the last weeks of 1772, ready for his New Year’s Morning sermon on 1st January 1773, a Friday.

Newton published Amazing Grace alongside 347 other hymns, in the book Olney Hymns in 1779. All the hymns in this work were written by William Cowper or John Newton. The museum shop has a modern hardback edition of Olney Hymns, and they are the sole stockists.

The museum was opened in 1900 as The Cowper Memorial Museum and Library, but changed to be The Cowper and Newton Museum after a few years. I can tell you that it will give you a good view of life in the 18th century, and I recommend it.

The building itself is also an exhibit, and helps to convey the impression of life in the 1700s. The house is early 18th Century, and is Grade II* listed.

If you want to know more about The Cowper and Newton Museum, please visit their website. 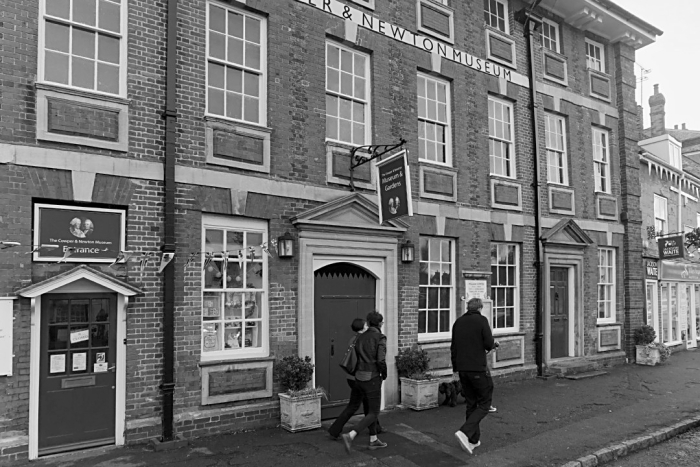 The Cowper and Newton Museum, Olney.

When I write these posts, I never quite know where I’m going to end up. So naturally, only now do I realise that the museum is closed until next year! It will open again in mid February, and then is generally open every Tuesday to Saturday, 10:30 am to 4:30 pm, until mid December. Admission is £6 for adults, and free for under 16s. Put a reminder in your diary! 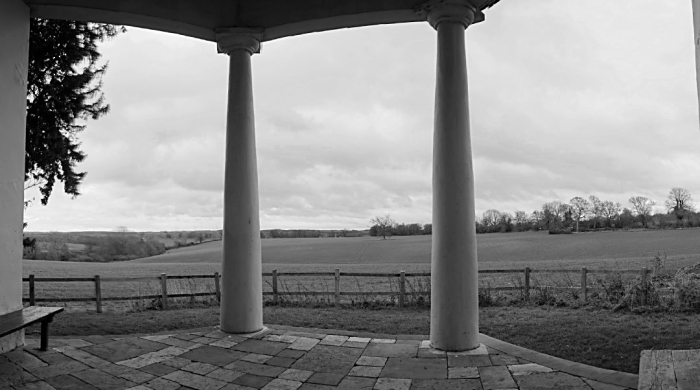 The view from Cowper’s Alcove.

Cowper’s Alcove is open all year round. From Olney, drive to Weston Underwood, and turn right into Wood Lane about 120 yards after you’ve passed through the stone gate posts.

The lane is narrow and bumpy. About half a mile from the crossroads, the road bends right, and soon you’ll see a small layby, on your right. It might be a bit muddy. You are now behind Cowper’s Alcove. There’s a gate. Take a seat in the Alcove and admire the view.

If you want to know more about Cowper’s Alcove and William Cowper there’s a post on my Roger The Reader blog, which will be published on the morning of Christmas Eve. 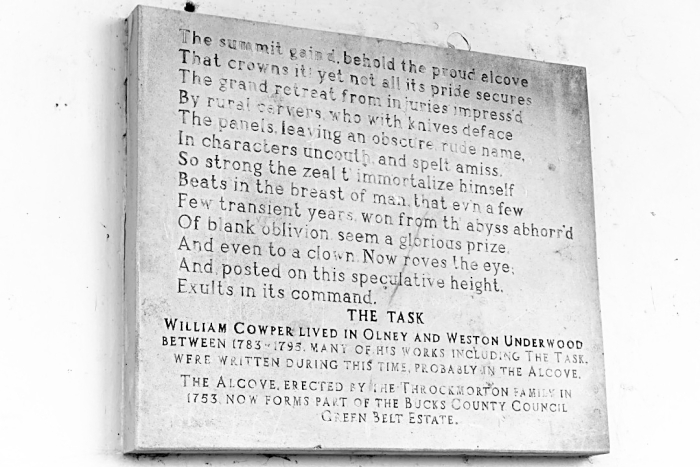 This stone tablet has an appropriate excerpt from Cowper’s The Task.