The Turning of the Year

One of the great things about riding around on a motorcycle and carrying a camera is that if I spot something I want to take a photo of, it’s very easy to turn the bike round and find somewhere to park, even on narrow country roads.

I can leave the bike tucked into a field gateway or on a verge, where there’s not a hope of parking a car. My bike has a large foot welded onto the sidestand, so that the stand doesn’t sink into soft ground. 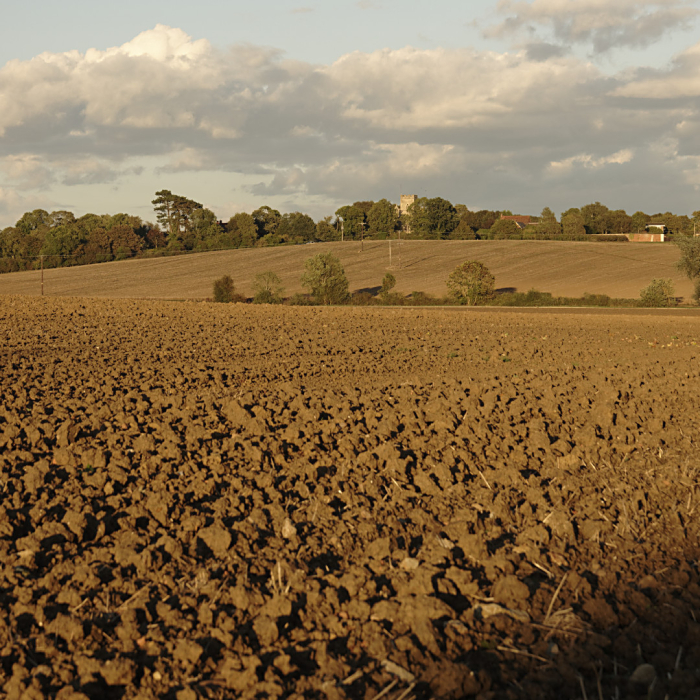 The Cathedral in the Fields.

It had being raining all day on Sunday, but in mid afternoon the skies cleared and the roads dried. I wanted to take a look at Hillesden church, known as ‘The Cathedral in the Fields’. It’s a large and airy church built in the Perpendicular style, and building started in 1493.

Hillesden is between Gawcott and Steeple Claydon. I took the A413 Winslow to Buckingham road. It’s not the most direct route, but I’ve liked and ridden this road for years. I took the Lenborough turn, went left at the T-junction at one end of Gawcott, and headed South to Hillesden.

The Church of All Saints in Hillesden is at the top of the hill. It’s a Grade One listed building. I parked close to the church.

I wanted to get a photo of the Cathedral in the Fields from a distance, but I first wanted to see look at the North porch door, which has musket and pistol holes from the English Civil War. The door is believed to have come from Hillesden house, now gone.

I got to the church just before 5:30 pm and it was open, to make ready for the 6 o’clock service. I had a quick look round and spoke to some of the parishioners.

One showed me the difference between the musket and pistol ball holes; musket ball holes are much bigger, perhaps three quarters of an inch across.

I tried to take a photo of these holes, but failed. My flashgun has one of those switches that easily gets pushed to ‘on’ when the flashgun is the camera bag. It was switched on and the battery was flat. I’ll have to go back.

I walked around trying to work out where I could get a good distance photo from. The South West looked possible, so I got on the bike and went looking for a viewpoint.

I found a place on a public footpath that ran from the end of a narrow lane by a farm. It’s a nice shot but I’m going back, as the man at the farm suggested, when the leaves have fallen later in the autumn. I’ll be able to see more of the church then. 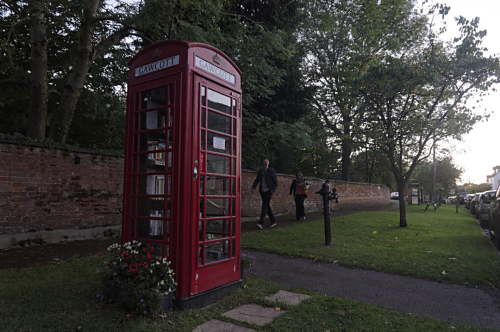 The Gawcott library in a phonebox.

It was getting cooler, and dusk was falling. I rode towards home. This time, I went through Gawcott, and spotted an old telephone box that had been converted into a mini library.

I wrote about two of these mini libraries (there’s over a hundred in the UK) on my Roger The Reader blog here. I’ll post a few more shots there at a later date.

Naturally I stopped and took photos, and had a brief chat with a couple of locals; they are in the photo. One of them, Tim, asked if there was enough light. Well there is for my camera, I explained. This is why I lug the thing around. It’s a Pentax K3, if you know what that is.

Back on the bike, and I headed for home, but not by a direct route. Just past Middle Claydon I saw an interesting scene, turned round in the lane and found a field gateway to park the bike. 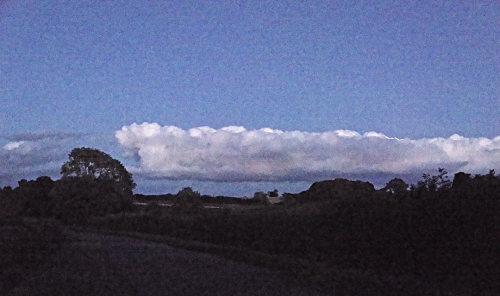 My first shot near Middle Claydon. This shot and the next one looked rather better before I reduced the image size to fit on the blog. You should see them in all their grainy glory!

Over the next ten or fifteen minutes I took photos as the scene changed. The sun had set behind me, but the cloud was still catching the light. After a while, I saw that part of the cloud’s top edge was very brilliantly lit. This part grew and I didn’t understand what was happening. Then the nearly full Moon appeared above the cloud.

A car approached and it was just what I needed to complete my picture. I knew what to do, but I mistimed the shot and had to wait, hoping another car would come by. The roads were quiet, but I was patient.

A few minutes later, another car came round the corner, and the headlights lit up the roadside hedge. I took the photo. This time my timing was spot on.

I rode home. It was a quarter to eight, and it was already dark. When I got home it took me ages to warm up, but I didn’t care.

But autumn is here. 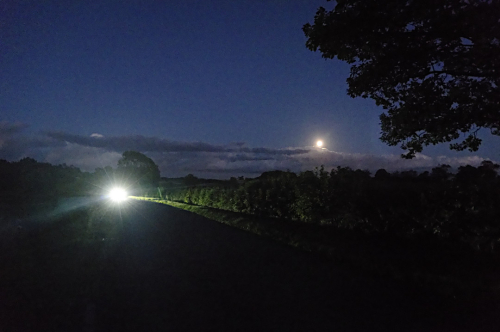 My last shot near Middle Claydon. The beginning of autumn.