A Bird From Aylesbury 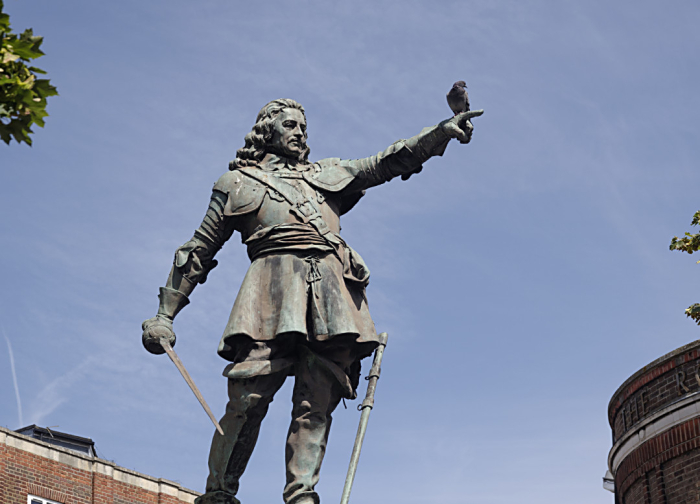 At the Apocalypticus: Road to Ruin promo day in Kingsbury Square, Aylesbury (see my previous post) it was lunchtime so I walked down the Market Square and through the Saturday market to find something to eat, and found a burger van down by the bus station.

On my way back with a cup of tea and a quarter pounder with cheese I spotted this comedian of a pigeon sitting on John Hampden’s finger. I balanced the ‘burger and tea in one hand and quickly took this photo with the camera balanced (just) in the other.
There’s a plaque on the base, which says:

He took part in the battle of Aylesbury 1st
November 1642 and was mortally wounded on
Chalgrove Field 18th June 1643. He died at the
Greyhound Inn at Thame 24th June,and was laid
to rest in Great Hampden church 25th June 1643.

“Mr John Hampden was one that friends and
enemies acknowledged to be most Eminent,
for Prudence, Piety, and Peaceable Counsels,
having the most universal praise of any
Gentleman that I remember of that Age."
Richard Baxter, 1615-1691.

Against my King I do not fight
But for my King and Kingdom's right.
Inscription on Hampden Jewel."

A well thought of man. John Hampden is said to have worn the Hampden Jewel around his neck at the Battle of Chalgrove. That is, on Chalgrove field. Both this battle and the Battle of Aylesbury took place in the English Civil War.

The bronze statue by the monumental sculptor Henry Fehr was erected in 1911. It was originally in a different position, but was moved in 1988 when the market square was pedestrianised.