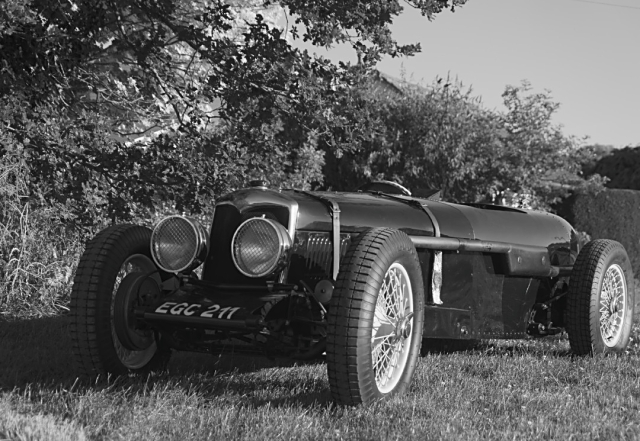 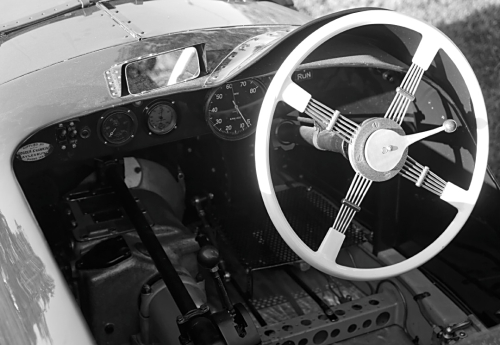 This 1937 Riley is a very minimal car. There’s not much room for the passenger, either. 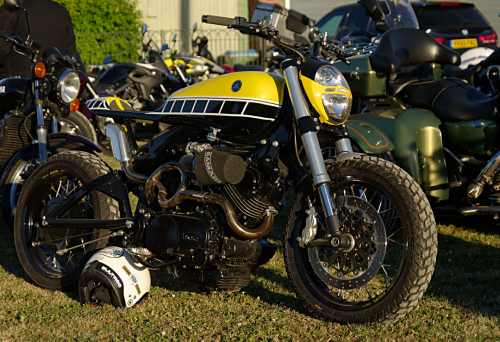 I had one of these, but it didn’t look like this! The original Yamaha XV750 SE this bike is based on was a factory custom; this is a one off cafe racer. 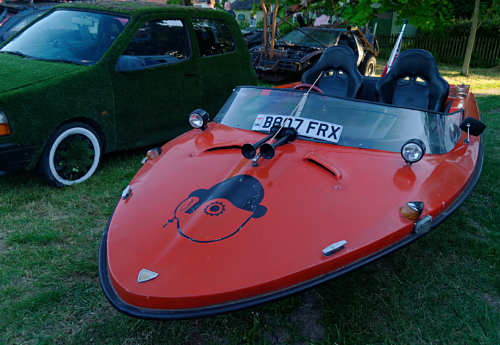 I didn’t mention there were boats, but this is not a boat. I didn't believe it was one, so I peered underneath the front and I wasn't too surprised to see a  wheel. It is based on a Reliant three wheeler. Like the Reliant cars, it has (I think) glass fibre bodywork. The head image is from David Pelham's cover design for Penguin’s edition of A Clockwork Orange. And yes, the car behind it is covered in artificial grass. 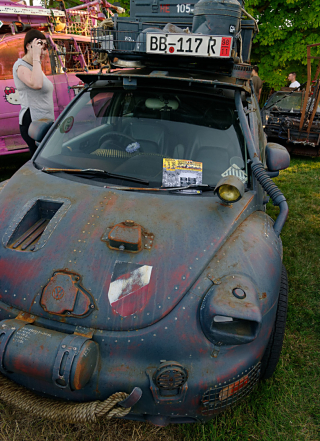 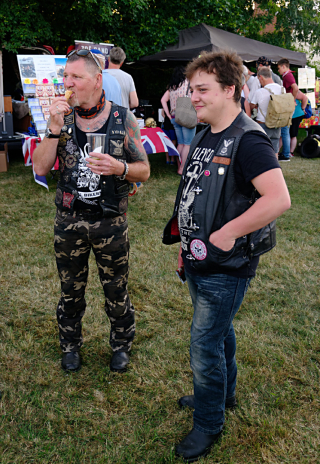 Members of the Milton Keynes based Barrel Bikers. Yogi (left) is their chairman. 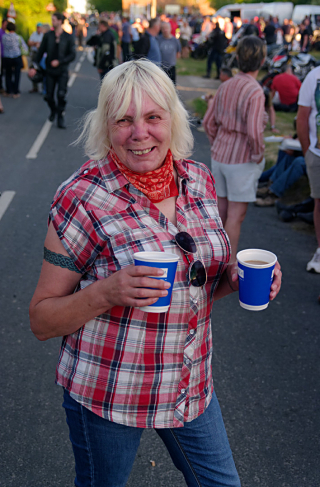 Bev gets the teas in. She had come straight from work, and is a member of the Brothers of the Third Wheel; riders of trikes and bikes with sidecars. 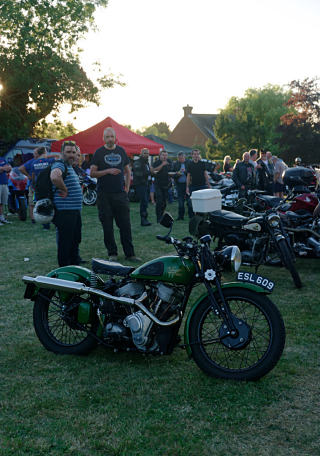 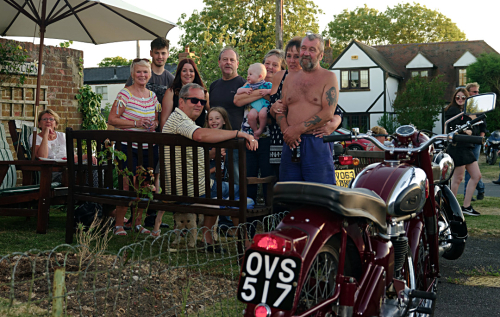 Neighbours in this Ludgershall close got together to watch the bike night right outside their homes. 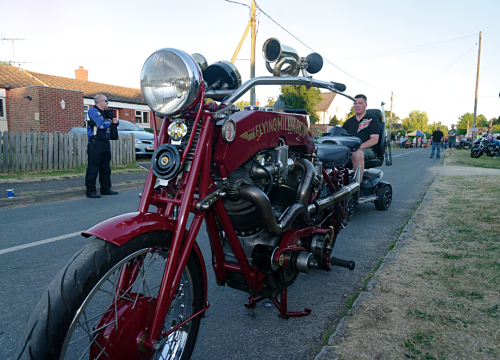 This one off bike, The Flying Millyard, has a five litre V-twin engine made out of two cylinders from a nine cylinder Pratt & Whitney aero engine. I later saw it as the owner rode it away, with a gentle low RPM chuff from the exhaust with a lovely scent of hot oil. 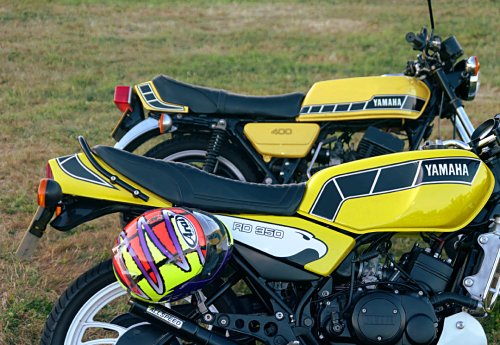 The furthest bike is the finest air cooled sports two-stroke twin ever made, Yamaha’s RD400. The nearest bike is the young upstart that replaced it, the Yamaha 350LC. 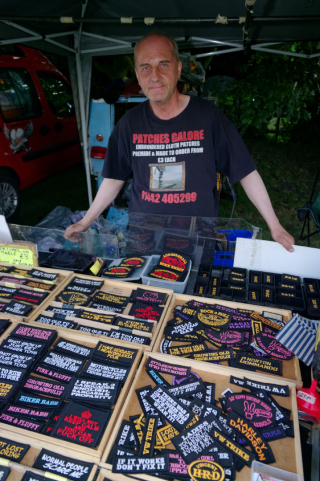 John of Patches Galore, with his stall. He will sew patches on for you, while you wait; he is often a bike events in this area. Please note before you click to see a bigger version, that some of the slogans on these patches are NSFW. 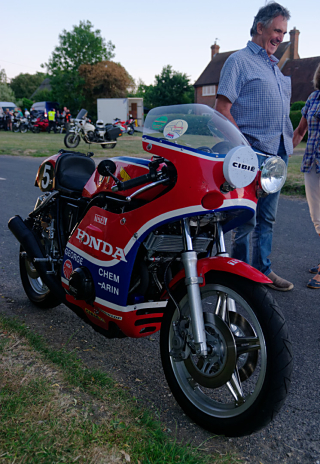 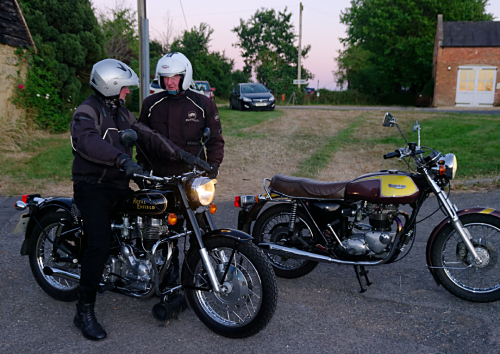 A modern royal Enfield 350 Bullet, a Triumph 750 Bonneville and a couple of mates. 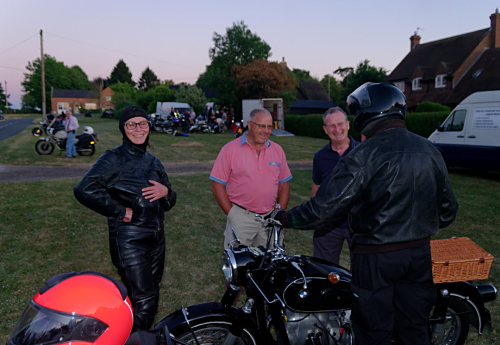 Events like this are mostly for socialising; they are only partly about the bikes. 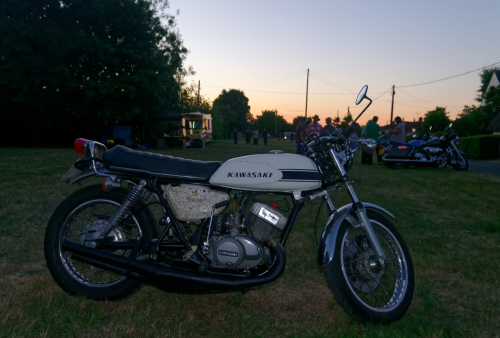 Kawasaki two-stroke triple, for go, not show.This was about the last photo I took; it was time to go home. 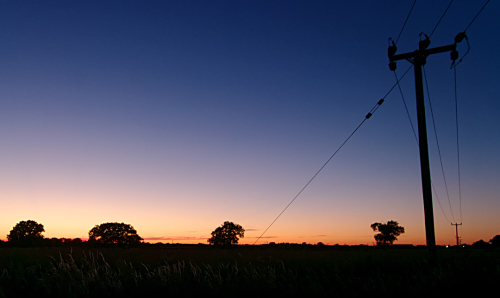 I rode off into the sunset, and took this shot on the way home, just North of Calvert.